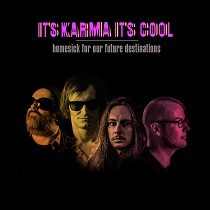 New album by the Lincoln four piece indie/power pop band, the follow up to their Woke Up In Hollywood debut from 2020. This second LP is made up of 12 brand new and tracks, all written by the band. Ian Canty ponders his next move…

I enjoyed the first It’s Karma It’s Cool LP Woke Up In Hollywood a great deal (read the review here). As a consequence of this, I was understandably eager to hear any new work of theirs and Homesick For Our Future Destinations has now emerged just over a year after that debut album’s issue. The Lincoln based quartet comprises of vocalist Jim Styring, a rhythm section of Mikey Barraclough on bass and the wonderfully named drummer Danny Krash, plus the guitar stylings of Martin Bewick. They weave a wide web musically, taking in pop, indie, psychedelia and even touches of new wave and power pop into their own sound.

The brief, but languid and cool guitar of Homesick itself begins Homesick For Our Future Destinations and then comes the carefully built All Branches Break In Time. There is a wash of gleaming jangle that is cannily set to a steady rhythm, which helps make the stately climb to the refrain all the more euphoric. The song meditates on the sense of loss that the passing of time brings and also bewilderment with a life that offers no easy answers and plenty of pointless cruelty.

Most of the album segues from one piece to the next and here All Branches Break In Time’s fade out leads into the delicate intro of Wild Fire Flames. There is a waver in Jim’s voice that occasionally made me think of Feargal Sharkey and The Undertones later records, when they dipped their toes in psychedelia, could work as a reference point. Even so it is only a passing similarity, as It’s Karma It’s Cool imbue their sound with their own personality. It also helps that the dancing melody on this number is both sweet and agreeable. The strident, straightforward beat of Absent Transient follows. This is more traditionally based, an immediate, excellent pop rock number in fact with some neat echoing guitar work employed.

Playing Brave coolly teases out its simple motif, but there is more detail going on here than one might first think. For instance, some eternal sounding drones are also used as part of the appealing folk/indie pop musical landscape. A speedy and busy r&b drive powers Dream Big, Little Giant and the song seems to address the fears that pull us back to the well-worn and familiar, just as one is poised to leap out into the future. We are encouraged and eventually condemned to think small sometimes.

The second half of Homesick For Our Future Destinations begins with She Slept With The Radio, which was released as a single and emerges like a crisp autumn morning. The bass playing and drums are really good on this as they so often are on this album, subtly driving the music from the top whilst chiming guitars chop in and out. Then the goodtime sound of another recent single Coffee Cup Circles warps in, a speedy piece that hurtles along in fine fashion, there’s even hints of The Clash in the ringing guitar lines that bring the song to a close.

After that high, Holy Toledo! slams on the brakes. It’s Karma It’s Cool take things right down to a much quieter sound, though there’s a nice hint of funkiness in the rhythm section as it glides to a dazzling finale. A beguiling, slightly woozy strangeness illuminates Guests On A TV Talk Show, which has some great backing vocals that add real value to the whole. Universe And Us is again powered by a breezy bassline, but there is also a sense of tension that is gradually but surely ramped up. Tying things up is the gentle reflection of Future Destinations, until the band blast through at the death with some pure rock and roll power.

Homesick For Our Future Destinations represents both a solid follow up to Woke Up In Hollywood and also a step forward, as the songs are deep and crammed with feeling. It’s Karma It’s Cool lyrically pepper the record with hints of stolen moments, wrong turns and indecision. Often the viewpoints concerned in the songs have people left to deal with the repercussions immense change in their lives and despite wanting a return to what they previously knew, they simply can’t go back. Though this is not a concept album as such, the characters that pop up on the LP appear static in a nervy present. Being unhappy with their present situations, they often seek solace in past routines. You can’t blame them usually, as they’re ultimately frozen in time, chastened by past events and forced to confront an uncertain future.

There’s little in the way of easy solutions on offer here, but in the final analysis this is what makes Homesick For Our Future Destinations work. After all real life is like that and here It’s Karma It’s Cool hold up a mirror to it, but also make sure it is all sound-tracked with some fine tunes.