Home Blogs it was 20 years ago today! thoughts on the Blur v Oasis... 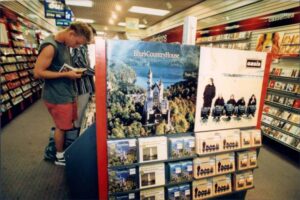 Noel Gallagher once told me with a typical glint in his mischievous eye that ‘the music business had set the stage for Blur to take over and then we arrived and they never forgave us’.

As the northern hordes entered stage right and there was panic they have always been resented and the chart battle was the culmination of this. It was that moment when the so called Blur v Oasis war started. The battle for the definition and the heart and soul of Britpop had started and of who owned the new agenda – was Britpop going to be the hangover from Madchester or was it for the new Camden set? the very soul of British pop culture was up for grabs.

North v South, perceived middle verses working class, art pop verses street pop, Chelsea v Man City: this was an attempt to draw and redraw the Britpop battle lines. Twenty years since the battle lines were so perfectly drawn there has been nothing like it since. In these times when bands are sidelined and pop culture is back to ten a penny boy bands and reality show judges it seems hard to believe that two guitar bands could get on the ten O’ clock news with a perfect piece of pop art theatre instigated by Blur’s management  that created a story that summed up the mid nineties UK so perfectly.

In many ways it was this battle for the soul of Britpop – the phrase that yer author had first coined way back in 1987 to describe a La’s and Stone Roses gig – that was up for grabs. Britpop, in many ways, was the Madchester after show – the moment when the whole country finally got onto the Stone Rose slipstream and it’s very notion and meaning was up for grabs- was London or Manchester going to be in charge?

Like world war one and world war two Madchester and Britpop were not really seperate entities but a blur (ha!) of two eras. There were so many connections and hangovers from that time that it is making it tricky to disentangle the two music scenes in the 21st century. Madchester had caught the media and biz on the hop with the Happy Mondays, who paved the way for this new kind of culture and the first real street music scene after punk and the Stone Roses who threatened to become the biggest band in the world before mythically pulling back at the point of super highness creating a new kind of template that, by 1994, was the staple for British bands.

Oasis and Blur were both children of this revolution but each band had taken different inspiration from the rubble of Mancunia – Blur had picked up on the underlying art pop and twisted it with this new indie mainstream culture – the whiff of laddishness, the odour of pubs and this post Euro 92 football terrace pop, this understanding that you can be artful, playful and make sense to people who had no interest in the art school end of pop. That classic moment when the terraces pick up on the underground which is the key moment in so many UK pop culture takeovers. Meanwhile Oasis were right at the heart of Madchester with Noel Gallagher being the the Inspiral Carpets roadie and ‘one of the Manchester 50’ scenester. In some ways they were the last band to arrive on that scene. Initially they were looked on with disdain by the music biz as if they were like hangovers from an age that the biz were never comfortable with – a time when having to go to Manchester for the weekend with A to Z map books of this distant city with its snark,y scary natives was a dread nightmare that eventually became a fun blowout when the natives got the drugs and the good times out.

Oasis were firmly in the trajectory of Manc – they were the Stone Roses with the artful edges apparently knocked off, with the Manc swagger laddishness that hid their innate sensitivity – they also came armed with a charismatic singer and a brilliant songwriter and stormed that stage that was set for Blur with a hooligan takeover.

With the battle lines so perfectly laid out the two bands were set against each other like Bowie v Bolan, Beatles v the Stones, the Pistols v the Clash and, er, the Osmonds v David Cassady – pop thrives on these rivalries and sides were taken, sides that at the peak of the battle threatened to engulf both bands with their over – simplification of their roles in the distant corners of the pop boxing ring. Blur were made out to be posh kids pretending to be yobs whilst Oasis were painted as northern thickos with no art to their craft and it is a criminal simplification of image that both bands still suffer from today.

The battle saw Blur move their Country House single to compete with Oasis’s Roll With It in a race for number one. The music biz was backing the Camden golden boys against the northern upstarts and Blur scored the number one in the skirmish but Oasis Definately Maybe album eventually went supernova and they eventually won the sales war. Interestingly the two singles also marked the pint when many fans felt that both bands had released their worst songs up to that point…

Twenty years later and perspectives have shifted again. Damon Albarn has become the pop polymath with endless projects that have thrilled with diversity and success whilst Oasis have been written out of the narrative – it’s like the music biz reset that stage that Oasis famously stormed and rebuilt it in their own image forgetting that the northern oiks are still massively popular outside the cosy metropolitan world. In pop, like life, there are so many truths out there. despite the fact that pundits groan at the mention of Oasis their records, especially the early ones, are still full of fire and brimstone and the freshness of self belief and a subtle brilliant song writing touch inside that wall of sound whilst Blur were far better at creating pop art anthems that could be played side by side to oasis in the nation’s indie disco battlefields.

In terms of pop history and pop culture it’s almost impossible to measure stuff like influence and success and meaning and for every band or person that rallied to Blur’s cause there are a whole heap of other bands who were enthralled by the Gallaghers ascent. It still matters. People talk of Blur being more inventive and Oasis having the golden touch but both bands were drinking from the same pot. For every nicked riff by Noel there was the same number magpie’d by Damon. For every pop art slice of smartness by Blur there was one by Oasis, for every huge record released by the Gallaghers – Blur were matching them.

Ultimately, despite the fact, that Oasis easily sold the most records it would be fair to say that this last of the great pop battles was a score draw, a titanic struggle between Chelsea and Manchester City played out over two legs with spittle showering banter from the terraces and in this instance from the pitch as well. Whilst the two bands bitter war of words has long since gone and there have been hand shakes and reconciliations the cultural fault line curiously remains. A fault line that event this battle has simplified as it swerves the other key band of the period like Pulp or the Prodigy who never got on the news but were arguably far more musically revolutionary than any of the other bands that did.

Even the hyper modern, booming, so called northern powerhouse of Manchester with the gleaming BBC in its nearby Salford neighbour’s heartland is still perceived as being cloth caps and whippet rock and London still talks about Manchester scenes and never London scenes – in 2015 the north v south, class divide of pop culture is a big as ever and the Blur v Oasis chart battle could still make sense now which is actually the biggest tragedy of them all.