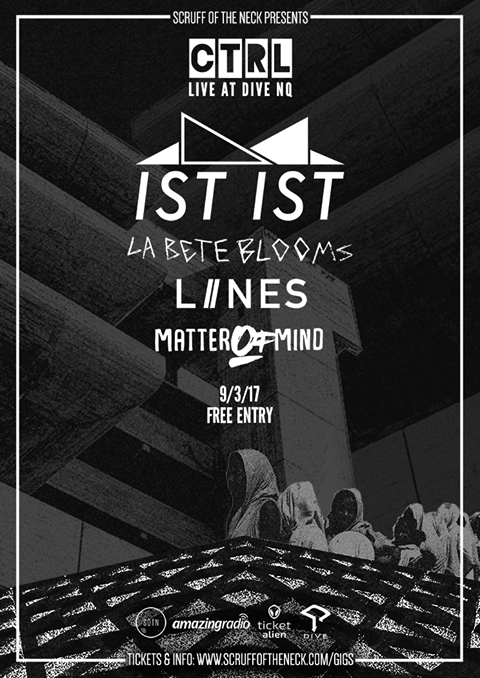 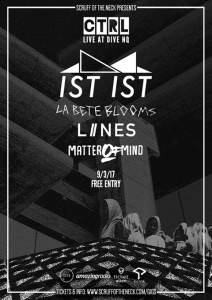 For a free gig Manchester gets one of the best nights of live music its seen in a long time and David Brown, of Even The Stars, was there to report for Louder Than War.

It’s quite apt that tonight’s venue, Dive NQ (formerly Moho, but now without the terrible sound and smell), is underground, because that’s what the movement behind the bands on tonight’s bill feels like. With a bill containing one of the best young bands in the country right now in Matter Of Mind, a touring band trying to break new cities in La Bête Blooms and two bands hamstrung by the industry’s obsession with age and pound signs in LIINES and Ist Ist, it’s one of the best nights of live music the city has seen for a long time.

CTRL Club, the regular Thursday night free gig that we’re attending, is put on by Manchester promoters Scruff Of The Neck and tonight’s line up demonstrates their ethos. They’re not afraid to take a chance on a band that many will dismiss out of hand for those reasons – as demonstrated by the way they put The Slow Readers Club on when they couldn’t get arrested – and are increasingly getting rewarded by packed sell-out shows like this one. It’s an entrepreneurial spirit and a wider vision that the city has thrived on in the past and long may it continue. 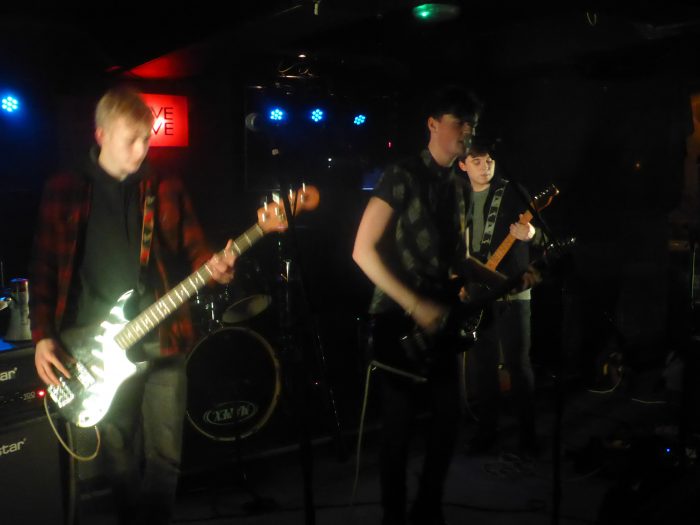 Matter Of Mind open up proceedings. Fresh from two acclaimed performances at Jimmy’s for This Feeling and an universally positive response to their recent single Far Too Wrong, they set the tone for the evening with a seven-song set that confirms why there’s an increasing number of people who think their explosive fusion of metal and indie is set to take them all the way.

They look like a gang, play like a gang and act like a gang in the way all the best bands of boyhood friends do. None of that would mean a great deal if they didn’t have the songs and the performance to back it up. There’s three songs from their stunning debut EP State Of Mind – the title track, Coffee Stains And Migraines and Silence – plus new songs Blindside, Sunken Revelations and Stay that show they’re developing exponentially as a band which is also evidenced in their live show.

There’s so much energy coursing through their set, but it’s controlled, directed and delivered with a ferocity that will blow your head off. At times Jordan shares call and response vocals with drummer Connor, bass player Rob struts like he knows how good his band is whilst guitarist Ash just lets his phenomenal playing style do its bidding for him. Far Too Wrong finishes off the set and you could close your eyes and imagine it as the encore of a festival set in a faraway field in a few years time. Matter Of Mind are that good. And the wiser older heads in the crowd, here for LIINES and Ist Ist, nod sagely in agreement. 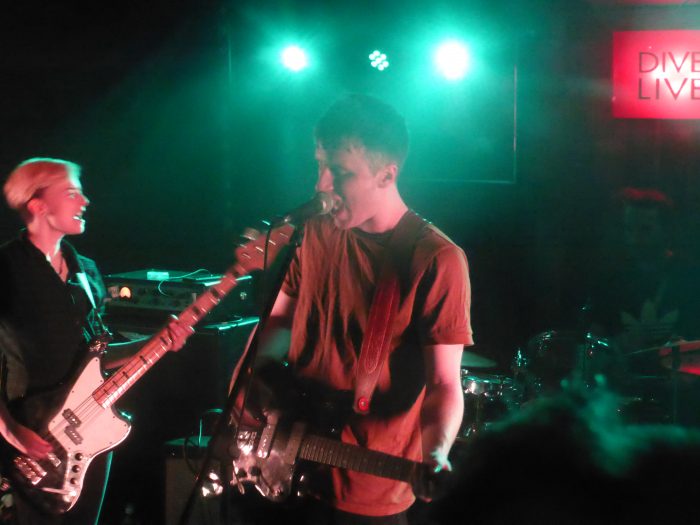 La Bête Blooms, hailing from Hull and playing tonight as part of a nationwide tour, could be on a hiding to nothing here with three local bands, but you wouldn’t know it from the minute they take the stage.

Newly expanded to a five-piece they take the bull by the horns and deliver a set that wins over the now substantial crowd. Songs like Breaking In are short, sharp shocks to the system delivered with a fierce rage in the voice of front man Daniel, but cased in some stark abrasive melodies and subtle yet impactful bass lines from newcomer Louisa that force their way to the fore. What You Want, also from last year’s I Know It’s Nothing EP, has a directness to it that’s violent in its intent and delivery and which could turn off a crowd that doesn’t thrive on this fearsome uncompromising onslaught. By the end they’ve won over the crowd, no mean feat considering most of us had heard nothing of them before they started. 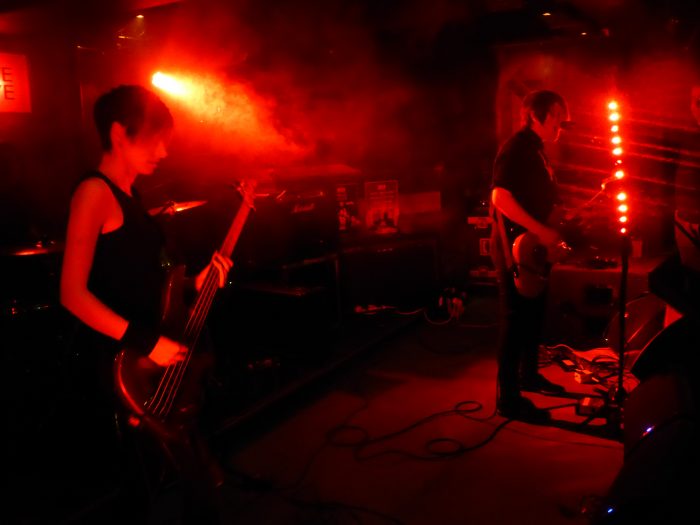 LIINES are just about to complete their debut album and their ten song set tonight features most of the songs that will make that up. In these dark enclosed surroundings, only lit up by a stark blinding bank of lights at just the right moment, they’re in their element.

Their songs are sparse and razor sharp, driven by the unstoppable momentum of Leila’s drums and Steph’s bass which feels like it’s singing to us at points as it spins a song round on his heels and sends it flying in the opposite direction whilst Zoe, seemingly always on the brink of expiring such is the all-consuming energy she puts into delivering her vocals, breathlessly delivers lyrics about heartache and betrayal. They’ve built up an impressive set of singles over the past two years – their breakthrough Never There which is still as spine-tingling as it was the day we first heard it, Blackout, Be Here and Disappear – and with stalwarts like Cold and Part Of You as well as more recent additions Find Something and I Never Wanted This, their album is undoubtedly going to be one of the best of the year.

The crowd’s response to them is phenomenal, they’re an outsider band, probably off the radar of most of the music business (with some notable exceptions like John Kennedy), but they engender so much love from those that do get them and it feels like it’s a steadily growing crowd that do. And that alone makes you feel like there’s still hope for music. 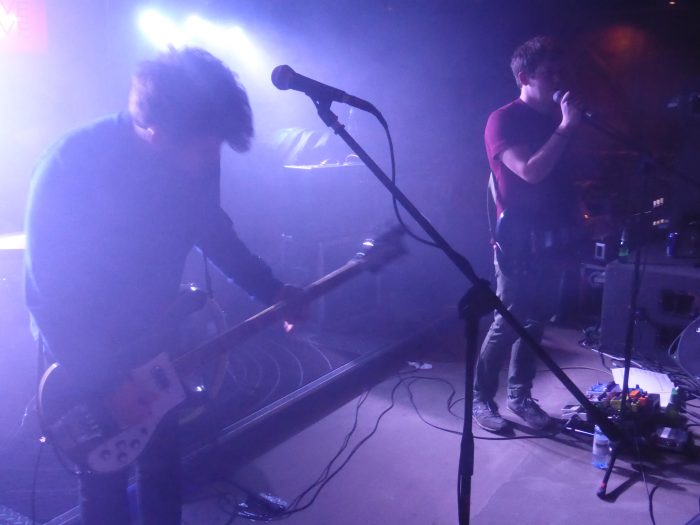 It’s an almost impossible act for Ist Ist to follow, but then Ist Ist are no ordinary band. They start with a new one that for the first minute feels like they’re disconnected, in their own world, but 7 then somehow unleashes a wave of overwhelming power that knocks us backwards. That’s what Ist Ist do, their second song Things Will Never Be The Same Again lyrically has just that line repeated over and over again, but there’s an anger in Adam’s third spoken, third sung, third snarled vocal and the thrilling collision of the base raw materials of drum, guitar and bass that means anything else is unnecessary.

They trip the sound at one point, such is the ear-shattering intensity of the onslaught, but carry on regardless. The set is forty-five minutes of the most raw, intense and punishing sounds you’re likely to hear anywhere these days and the crowd either throw themselves into a frenzy or stand transfixed. Recent single Silence and future single Strangers are a little more accessible to the more tender ear, the latter even boasting an almost radio-friendly chorus, but it feels like both are just luring you in like a black widow spider waiting to unleash their venom on you.

Whether it be the more familiar songs like Brutalize, Love Song and the set-closing White Swan or the imposing stagger of new song Ghost, the impact they make is the same despite the bludgeoning delivery method leaving the unsuspecting listener exposed at their mercy. They finish with an explosive encore (no one was actually going to let them physically leave the stage) of Rats, an old Soundcloud song that’s gained cult status amongst their growing fanbase, that’s two minute of sheer savagery that sees Adam end up amongst us.  There’s no band in the world like Ist Ist – quite simply because we couldn’t cope with two of them.

Ist Ist are on Facebook and Twitter. They play new Manchester venue The Peer Hat on 21 April.

All words and images by David Brown. More from David on Louder Than War can be found here and he is also editor of Even The Stars.