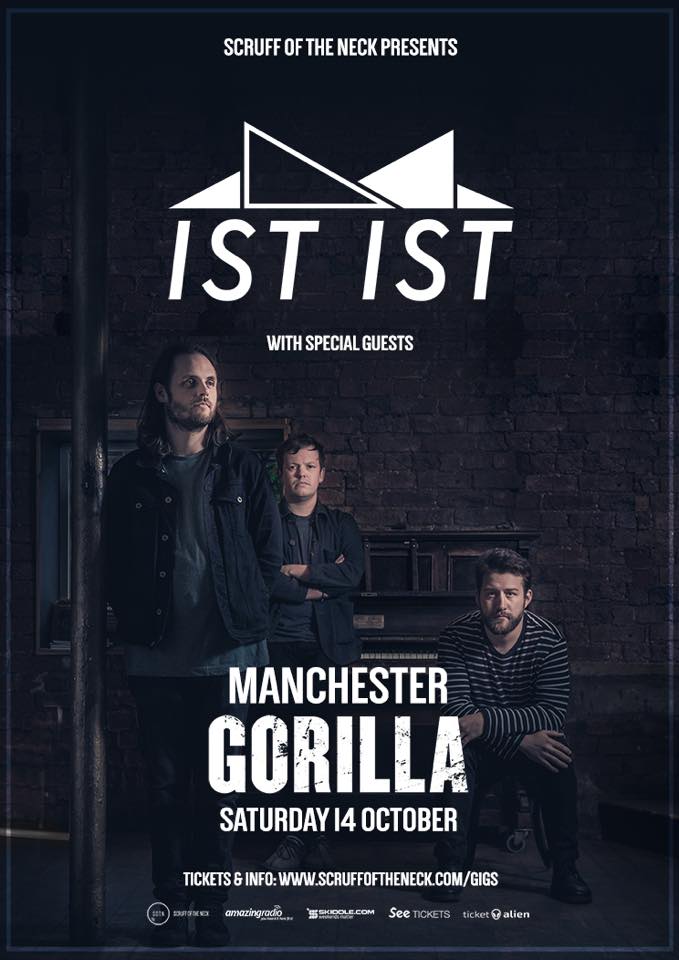 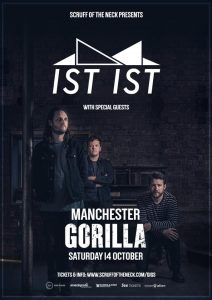 Mancunian trio Ist Ist have announced their largest headline show to date at Gorilla on October 14 to coincide with the release of new material.

The band have made their mark on the Manchester scene, and more recently further afield, with some of the most incendiary live shows that seasoned gig-goers have witnessed and singles such as Strangers, Silence, Night’s Arm and White Swan, plus the song Rats that has become something of a cult favourite to the extent that two guys turned up to their last Manchester gig in rat masks. The band themselves claim the song is dead now; testament to their refusal to conform to the normal rules of engagement of the industry where bands need a flowery shirt, a “good haircut” and a set full of “bangers” to progress.

Ist Ist formed in 2014 and revealed a set of songs on their Soundcloud in January 2015 that were picked up by an eagle-eyed blogger before they played their first show at Night And Day in the February, which catapulted them into the lists of new bands to watch and had the local blog scene raving about a band that was different from the rest right from the very start. Since then they’ve progressed to selling out venues such as Sacred Trinity Church and The Peer Hat as well as securing stage headline slots at Ramsbottom (Head For The Hills) Festival for two successive years.

Bass player Andy Keating said of the show “We’re really looking forward to attempting to make the step up. It’s exciting but quite daunting, the date had been provisionally booked for probably two months but we took our time deciding whether to go for it or not. With us it always has to feel right.

It might sound slightly aloof and arrogant but we don’t feel we’ve got much to prove in the smaller venues; we’ve been mainly playing packed out basement venues for 2 years, we think we have the bold sound and the hardcore fan base to take the leap into really established spaces like Gorilla.

The sound is a key factor. When we played the big show at Sacred Trinity Church in January we had no problems getting our sound across. It was similar at Ramsbottom Festival, it’s almost as if it needs that bigger venue and space to breathe. A lot of bands who can sound brilliant in the smaller clubs can’t quite cut it in the big atmospheric venues but we’re almost the opposite, we need the big sound systems to give people the full effect of what we can do.

We’re quite a way off even beginning to decide what the set will be. We’re writing more new songs than we have done for a long time and they’re taking us in a slightly different direction. We’ve shelved plans for an album for the same reason. Right now we all feel as though there’s some really interesting things not far round the corner sound-wise so we want to see where that takes us before we commit a bulk of our material to record. The set will probably be a mix between what you might call the classics and the new sound. I think we’d love to go out and drop a whole set of new stuff, but we can’t forget that people like our older songs, and the dedicated fans we have are the reason we’re playing such a big show in the first place.”

The show is being put on by local promoters Scruff Of The Neck, who’ve been involved in shows with the likes of The Slow Readers Club and Larkins as they’ve progressed through the city’s venues and whose owner Mark Lippmann is excited about the prospect of the band in such a big space “Ist Ist are one of the best live bands I’ve seen in my life and to be able to work developing an artist like this from fifty cap venues to spectacular spaces like Gorilla is what keeps me going. This show will go down as one of the most important Scruff of the Neck shows in recent years.”

Ramsbottom (Head For The Hills) Festival on September 16

Tickets for Gorilla can be found here.

All words and images by David Brown. More from David on Louder Than War can be found here and he is also editor of Even The Stars.