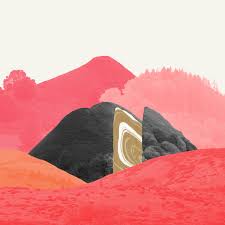 Welsh psych outfit Islet return with their first release since 2016. Soaked in themes of death and rebirth Eyelet may be the bands finest work to date. Simon Tucker reviews.

A lot can happen in four years and a lot has happened in the life of Islet. The band are now a three piece (Mark and Emma Daman Thomas, Alex Willams) with Mark and Emma becoming parents for the second time and Alex sadly losing his mum which led to him moving in with the others in their home in the hills of Mid Wales. With this information you can instantly see the connections to the albums lyrical themes that seem to focus on birth, rebirth, death, fear and courage. It is this last word that is the most important as Eyelet is Islet’s most bold and courageous album to date with the band twisting their psych pop sensibilities into a form that feels more autumnal, abstract and richer than their previous albums.

For years now Islet have dealt in a form of lysergic pop that was full of bright colours and sharp edges yet Eyelet sees the band move in a slightly more earthy feel. The sharpness has gone replaced instead by a blending of corners making the music slip and slide often evolving in numerous ways even in the confines of a single song. Gone are the brighter textures replaced by reds and browns. This does not mean the band have moved away from their more experimental or playful tendencies as they are both here in abundance with songs layered with zig-zagging melodies and finely tuned nuances (just check out the way Moon folds in on itself halfway through becoming more and more oppressive as it collapses towards its climax) it just means there is a maturity to the album and a real sense of drive behind it. Eyelet is in many ways a very different album from what the band have released before but it never once feels unlike an Islet release. A unique gift.

Eyelet is a  multifaceted album full of welcome surprises. There’s the sudden doom-march industrial drums that drive us towards the climax of No Host which just sounds bigger and bigger the more you hear it. Then you have the click-clack drum pattern that switches the tone of the gorgeous Geese (inspired by Welsh cultural theorist Raymond Williams’ novel People of the Black Mountains) into a piece which feels like it belongs in the world of Kieran Hebden or Dan Snaith in the way it creates a humanity and romanticism in electronically driven music. Geese manages the sublime trick of feeling both expansive yet intimate..the sound of our hills, our ancestors and our heritage which when put in to the current political climate is a an excellent slab of subversive protest pop.

Speaking of protest songs…Eyelet contains not only Islet’s most powerful statement piece to date but also their finest song and their first real anthem in the shape of Radel 10. Radel 10 is the punch the air and shout “they’ve done it” moment on the record and a song that I guarantee you will be repeating many many times over. This is the moment where all of the thematic elements of the album coalesce in to a beautiful whole creating a piece of percussion driven pop that is emotional, passionate, sincere and invigorating. Named after a tabla drum machine, Radel 10’s lyrical inspiration was partly drawn from The Good Immigrant (landmark anthology of essays on race and immigration by BAME writers) and you can feel Emma Daman Thomas’ defiance bursting through the piece. Emma’s mixed heritage seems to feed into the song and you feel that raw emotion on every level. When she sings “Go back where?NO!” your very soul is lifted. “And you know you know you know you’re not alone / it just feels that way”. This is the song we needed. Striding, empathetic, bold and ultimately catchy as fuck..when Emma’s vocals lift off to “WAAAYYYYYYYY”about three minutes fourty in to the song you just know you are hearing something truly special.

As with all things Islet who does what musically is anyone’s guess and that adds a wonderful mystigue to the band. Here is the beauty of democratic art where a group of people are pulling in the same direction for a common goal..dim ego dim problem. Synths and acoustic rub up together in partnership not competition..drum machines drive pieces but pull back the layers and you hear a team of bass guitars playing great little melodic lines throughout. Musically this is an album you will need to live with for a while if you wish to discover every little element that has gone in to its creation. For a band whose entire existence has been the avoiding of rock standard bullshit rules and set agendas it seems a bit off to highlight one person in the band but hey I am going to do it anyway as no review of Eyelet would be complete without mention of the stunning vocals of the aforementioned Emma Daman Thomas on this album. Emma’s voice has also had a unique beauty but here there is an added grit and resonance that makes her delivery even more effective. It is there from the opening Caterpillar where Emma’s voice whisper/sings the opening drenched in echo like it has been recorded deep in a cave. From this moment on the album is a true masterclass in vocal delivery and how to not only arrange harmonies but how a singer can twist from the subtle to the grandiose in a second never once feeling forced or contrived. All wannabe singers should study this record. We should mention producer Rob Jones here who has done a great job of making sure every second of the album is a moment of discovery for our ears and has helped the band drape the red and brown velvet feel over the whole project.

So here they are back once again. Eyelet is not only a welcome return by a beloved band but one of the best albums to come out of the UK in many years. Its balance between the political and the personal make it a pop album with a punch. Lyrically, the albums themes are universal meaning anyone can connect with them and whilst there is a sense of anger at things that are going on right now, Islet have created something that does the impossible and make you feel really bloody optimistic. We may lose loved ones, we may be at certain crisis points but we have art, we have fight and we have humanity and that is quite simply one of the most important messages that we could be hearing right now.