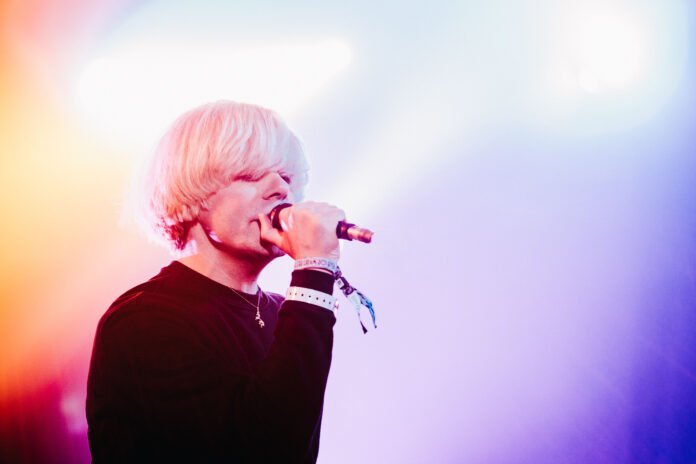 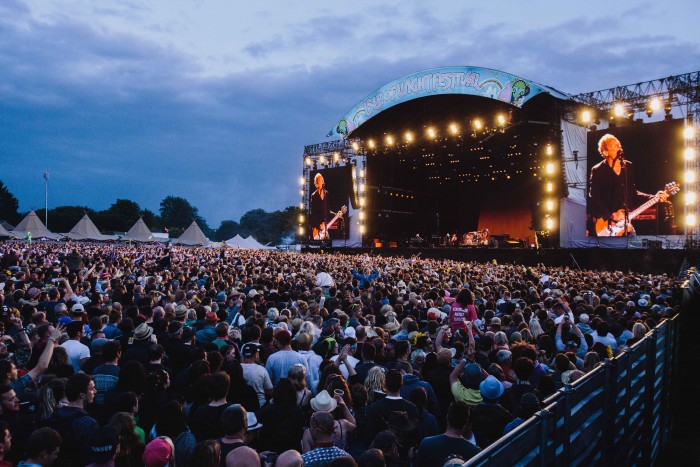 Harley Cassidy reports back from last weekend’s Isle Of Wight Festival for us.

It’s day one and nestled neatly between a churros stand and the Big Top is the all new Jack Rocks stage in collaboraton with indie club night This Feeling. Boasting a line-up which is filled with a bevy of exciting young bands and artists, it seems only right to check out the fresh new talent on display, a usual rarity at the nostalgia drenched Isle Of Wight.

With a presence that reminds you of The Kinks and early Stones, Hidden Charms are greeted to a packed out tent at the stage. They’re a band refreshingly sure of what they want to sing and how they want to look and their music stripped right back to the core of rock and roll music and good old rhythm and blues. A youthful swagger, killer 60s dress sense and a set so tight and to the point that you could record them live. They’re a band destined to climb onto the platform titled “next big things”. 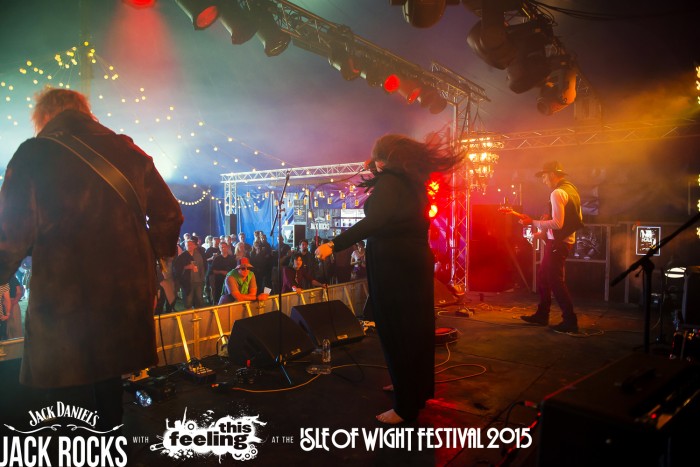 Following their set are Bang Bang Romeo, a visceral, energetic, 60s inspired rock and roll group propelled forward by their lead singer, Anastasia Walker. With a jaw-dropping vocal akin to Beth Ditto’s bluesy howl, it’s hard to tear your eyes off Walker as she dances around the stage, surrounded by her glitter adorned men. Anyone who knows how to do a festival right are well aware that you must discover at least one band that blows your mind, and Bang Bang Romeo were that band.

Taking things to a euphoric high were Friday night headliners The Prodigy. You get what you expect with The Prodigy: blistering energy, aggressive vocals and a crowd so unruly you might want to insure limbs before you head into the moshpit. Tonight, even though their set is deluged by rain so vicious it’s a borderline monsoon, The Prodigy are making sure no one is pansying out – “you’re not gonna let some fucking rain stop you, are ya?!” berates manic frontman Keith Flint. As they whizz through banger after banger, opening with 90s anthem Breathe, covering new material and a hefty portion off Invader’s Must Die, the real surprise is when they launch into the comical yet enticing Ibiza with guest Jason Williamson from Sleaford Mods barking out the lyrics in the most thuggish manner possible.

Saturday’s a sunnier day and nothing says party quite like Kool And The Gang as they encourage their audience to get down to their popular feel-good tracks including Jungle Boogie and Celebration. In contrast, Jessie Ware keeps things mellow with her velvety tones and ultra-slick production as she cheerfully chats to the audience, looking wholeheartedly pleased to be there.

Keeping the pop momentum flowing is Pharrell. It was refreshing to see a wave of people so varied in nature watching him, proving that most of us can appreciate that he’s a talented fella. The amount of songs he has written and produced is held testament to his setlist, chock filled with tracks including Gwen Stefani’s Hollaback Girl and Snoop Dogg’s Drop It Like It’s Hot alongside his solo tracks, proving that he really is this generations Nile Rodgers. The real highlight is when he knocks out three blistering N.E.R.D songs in a row, whereby the crowd lose their shit. He invites fans on stage to dance with him, most amusingly a sequinned middle-aged woman who begins twerking to She Wants To Move. At one point he even sings the American National Anthem (which no one knew the words to) whilst making us all point towards the sky in tribute to Jimi Hendrix, informing us that indeed, Jimi “can hear us”.

Whilst he may have been an odd warm up for band that embodied Cool Britannia, the crowd were more than ready for Britpop heroes, Blur. Damon looks positively savage tonight, loping about the stage in his heavyweight docs, Fred Perry and bomber jacket. It’s clear he’s unwell, as he sweats profusely and asks the audience to carry him through the songs most of the time, due to sore vocal chords. Their talent at being headliners, however, is undeniable as they are armed with a fistful of tracks custom made for festival fields.

Tender, The Universal, Beetlebum, Girls & Boys, Song 2… the list is pretty much endless and with curveballs like There’s No Other Way thrown in, it makes for a highly entertaining set. Of course, the band are indebted to their latest release, The Magic Whip, even selling the ice-cream at vans around the festival, and they play a lot of tracks from the album. Then there’s Parklife; even though we haven’t seen or heard much from Phil Daniel’s since the death of his character on Eastenders, it was still a surprise novelty to see him appear on stage to bark his verses out.

“How many of you are seeing Blur for the first time tonight?” ask Damon to a crowd of new and old timers. The band are no longer the cheeky cockney spaniels of British guitar music and are instead noted for Damon’s innovation and intensity as an artist. Their music is loose and coated in reverb for some tracks, aided by Graham Coxon who croons through Coffee and TV. The most exciting act of the festival, Blur leave no one thinking they’ve “lost it” as the singalong tracks from The Magic Whip proves.

First acts to see on Sunday are teen band Pretty Vicious who play the Big Top with nihilistic aplomb. They’ve just signed a record deal with Virgin EMI proving that they could just be some of the luckiest buggers out there. 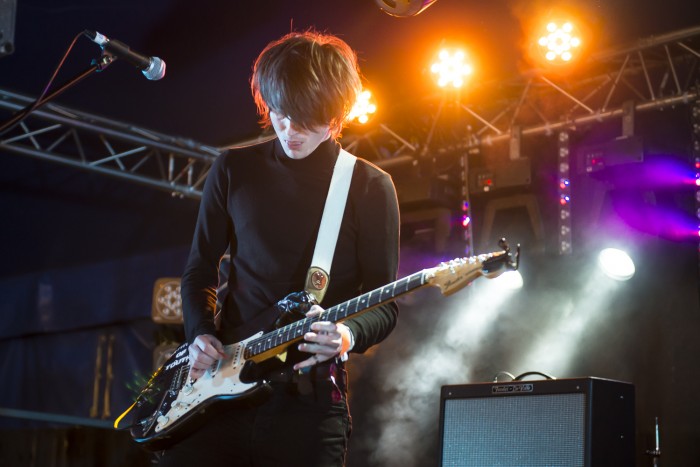 Back in the fortuitous Jack Rocks stage, Trampolene, a three piece from Wales, are entertaining the crowd with a blend of superbly crafted indie songs, including You Do Nothing For Me, alongside some truly hilarious spoken word pieces by frontman Jack Jones who has the Britpop swagger, voice and personality in spades.

Battling to see which indie band can be more derivative than the other are The View and The Courteeners, armed with a pretty sludgy stage presence and songs that entertain the same old indie goers between them. It’s a shame to see two bands who have so much promise and so many dedicated fans not really have any spark between them. It’s clear they’re both inspired by so much yet don’t inspire anyone else.

Fear not though as Sunday is the day everyone has been waiting for in the shape of an act who can truly channel the Isle Of Wight spirit of old. After they re-scheduled their previous two  concert dates due to ill health, talk was rife of whether Fleetwood Mac would actually turn up for their closing headline slot. But of course, they did. Undoubtedly, Fleetwood Mac were the main reason that people descended onto the island this weekend, with their crowd easily eclipsing Friday’s and Saturday’s put together. 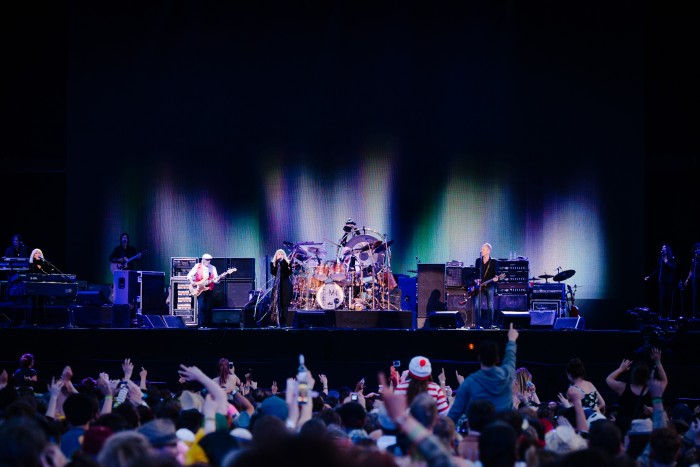 As the band gracefully take to the stage and the spine-tingling intro to The Chain kicks in, no one’s in any doubts about how this show is going to go tonight. Stevie stands centre stage, as ethereal as ever yet unashamedly rock and roll, she’s the main lynchpin of the group, holding all the pieces together and letting sharp wit and confidence curated by over 40 years in the industry take hold. Whilst the band sounded great, the sound quality just wasn’t on par bringing down what should have been a euphoric, hands in the air set to nothing more than a mass singalong. With news surfacing that Dave Grohl has broken his leg on stage, Fleetwood Mac dedicate Landslide to the Foo’s frontman. The gravel of Stevie’s and Lindsey Buckingham’s voices are complemented wonderfully by Christine McVie’s velvety tones. She’s greeted rapturously by the crowd as she re-joins them, their last powerful weapon, with the English purity in her voice pulling them all together to re-create the wonderful, hippy harmonies they’re known for. 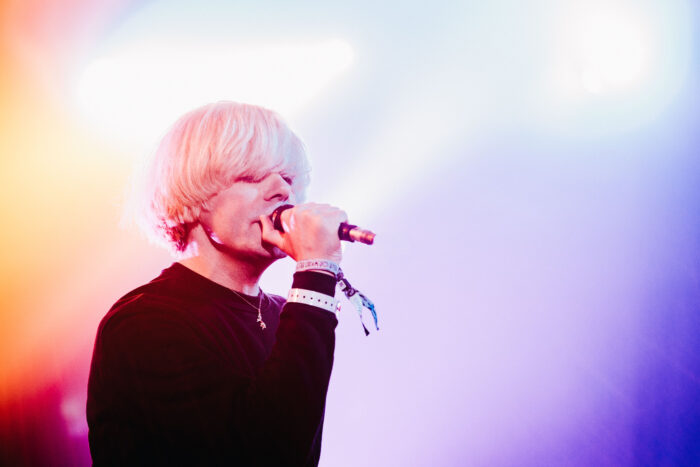 However one of the best sets of the weekend belongs to 90s baggy indie band The Charlatans. Playing the last set of the festival, the Big Top is rammed and spilling out into the pitch black night as every festival goer dances to tunes including One To Another, Sproston Green and The Only One I Know. Tim Burgess sets him and the band apart from every other nostalgic dad rock band out there by being innovative and emitting a fresh, youthful exuberance which leaves the audience eating out of their hand. Perfect way to close one hell of a weekend.

With thanks to Clive Drew and Jack Rocks | Jack Daniels | This Feeling for the photos apart from Tim Burgess for which we thank Dylan Roberts, Fleetwood Mac whose photo was taken by Callum Baker and the lead I’m image at the top of the review for which we thank Sara Lincoln Photography.