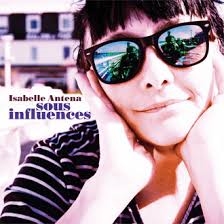 New Studio LP by French Bossa-Nova titan Isabelle Antena who over the years has enjoyed large scale success in Japan and sold over a million records….LTW’s Ian Canty heralds “The Summer album of 2017” from possibly the world’s biggest selling unknown quantity……….

Isabelle Antena has been plugging away gamely since right back in the early 80s, when the original Antena trio that gave her the name originally formed. They pursued a Jazz-laced format in the New Wave music world of the time, perhaps a little in the mode of the likes of god-like genius of Weekend/YMG. Around the same time as their emergence Carmel and Sade began to have mainstream success in the UK charts with a similar light Pop/Jazz sound, but Antena were always a little more, erm, “hardcore” I suppose, in the fact that you felt they really meant it and had a feeling for the music rather it being just the latest fad being used as a platform to sell product. The combo rubbed shoulders with the cream of the Factory/Post Punk set whilst recording on the Les Disques du Crepuscule label back then. When the band split in the middle of the decade, the newly solo Isabelle went onto forge a long and fruitful career and also found the time to dabble both in production and other projects (such as the Powaga Sisters).

Although she has experimented in other fields, trying her hand at Electro-Pop, House and Funk in the past, here she is right back to those Jazz Pop roots on this beautifully crafted, achingly evocative album. On this LP (originally meant to have been am offering from another one of her projects the band Pause Café) the lyrics here break down into a 50:50 split between Isabelle’s home language of French and English. Now I’m about as fluent in the French language as the fictional character Derek Trotter, but I was still seduced by what’s on offer here, it’s simply gorgeous. Seduction is a good word, because there’s a definite sensual and free-spirited feeling here. It is hard to believe it now but at one time Jazz was the ultimate outsider music: we’ve had some many years of woodwork teachers in waistcoats and bow ties playing ragtime and jokes at its expense on “The Simpsons”, but for a good long time Jazz in its many forms was the voice of rebellion and the soundtrack to Bohemian, anti-establishment living.

It is precisely this older feeling, a sort of step away from the norm/revolt that Isabelle Antena taps into in her own low-key, decidedly chilled way on this recording. The “Girl From Ipanema” after all didn’t care about anything apart from the sun, the beach and the easy life and a “don’t care” attitude has been central to all rebellious music. Indeed “Over You”, which resembles that song in its light Bossa Nova format blankly states “I don’t care about your problems”. But that’s not as negative as it might sound, in fact it is a “getting on with your life after a love affair has ended” sort of song, but I think the point stands. For the most part “Sous Influences” is life-affirming and warm, with “My Lexicon” being the kind of gentle plea for tolerance and kindness that is very much needed these days. A very catchy number too, with sounds of the beach giving way to keys and (I think because I’m no musician) chunky barre chords with a wonderful scat sung hookline. It is symptomatic of the marvellous lightness of touch on display through the whole LP.

Though on the whole there is a happy and playful feel to this album, it runs the gamut of emotions. “Te Garder”, for instance is much quieter, having sparse percussion, wispy French vocals, all allied to the most mournful brass accompaniment. “Senza Fine” is a sad/sweet torch song and “Aht Uh Mi Hed” rumbas along with a deep sense of regret, but “Trip To The Fair” mischievously builds to a neat climax from a vocal and piano introduction. Isabelle’s voice is magnificent throughout: going from “couldn’t care less” to “couldn’t care more” in the space of a few words, at all times wonderfully clear and bright. A marvel.

Listening to this record on a dank, dark winter’s morning was a revelation: though it obviously didn’t actually brighten the sky or warm the temperature, it seemed like it to me. Feeling brighter and happier, with thoughts of carefree summer days at the beach teeming through my mind, as the rain beat down and the gusts of wind from Storm “whatever it was this time” rattled the panes of glass in my windows. “Sous Influences” is the perfect antidote to winter blues.