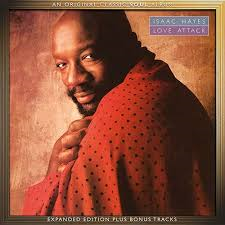 After his huge success in the 1970s with “Shaft” and “Black Moses”, Isaac Hayes had mostly held a low profile during the early 80s. He kept himself busy with various acting roles but as his problems with the downfall of Stax and the financial troubles inherited in that situation with his ill-fated Hot Buttered Soul Records imprint kicked in, it meant he spent a great deal of time in the musical wilderness. But recently things had begun to come around to provide an environment more agreeable for his own kind of sound. Hayes had made his first record in half a decade in 1986, called “U-Turn” and this was a pretty successful outing, featuring an updated and computerised version of his early 70s sound. Funk had proved remarkably durable and never quite went out of fashion (Cameo’s “Word Up” LP and single had been a massive hits showing there was a need for modern Funk in the 80s) and the technological advancements had meant that Isaac could now record virtually as a one man band (most of the tracks on “Love Attack” are self-penned too). Plus Hip Hop was by this time big business and often dug out the rare grooves of 70s Funk as samples to power their new recordings. All of this meant that there was an audience receptive to Isaac at the time of the follow up to “U-Turn”, 1988’s “Love Attack”.

Housed in a sleeve which featured a photo of Isaac seemingly pulling off the kind of implausible high-stepping karate kick that would have had him gasping “Ooh my knackers” in true “Viz” style afterwards, “Love Attack” is strong but very 80s sounding with sophisticated electronic percussive beats dominating proceedings throughout. This album featured mainly typical R’n’B Hayes ballads like “Eye Of The Storm” given the digital treatment, but also a few uptempo pure Funk workouts like the title track and the single “Showdown! (this one is featured in four remixed versions as bonus tracks – it’s a good thing it is one of the LP’s better songs!), which shadows “Theme From Shaft” with an edited swearword in its 7″ inch format. The 1980s production techniques do put their clear stamp on the recording process, but “She’s Got A Way” (which somehow turns a Billy Joel song into a lovely Gospel-laced deep Soul slowie) is a goodie that could have come off any classic Isaac Hayes LP and “Foreplay Rap” delves right back to the spoken word “lets make love baby” songs of his heyday.

That “Love Attack” didn’t make the commercial headway of it’s predecessor is probably down to the fact that although all pleasant enough listening and very danceable, the only track that really stands out is “Showdown”. Though this LP showed Isaac Hayes had not “lost it”, it was more consistent than thrilling and he was not really hitting the form that had seen his worldwide success 15 years previously.

In summary, “Love Attack” is a perfectly acceptable entry in the Hayes canon given the timeframe, but I suspect most people would select his ground-breaking early 70s work before delving into his later produce. It is a shame but he only really recorded fleetingly after this one, only a few more LPs in the 90s before his acting work including “South Park” took over. Though perhaps not his finest work, for anyone looking for what Isaac could do after the 70s Funk boom had ebbed, this disc gives some evidence that his inspiration and talents had not been completely snuffed out by personal wrangles, money troubles and studio gimmickry. He still had the Funk alright.