Home Blogs Is Morrissey at the Manchester Arena the biggest gig by an unsigned... 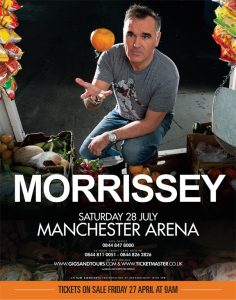 Smiths event in Manchester on Thursday

Is Morrissey at the Manchester Arena the biggest gig by an unsigned artist EVER?

Despite being unsigned, Morrissey’s popularity is no less than it has been at any point. In many ways, his work with the Smiths is now more popular than at the time – their best of ‘The Sound of the Smiths’ was the 15th most listened to album on Spotify in 2010 – and EMI have been reissueing Morrissey’s back catalogue like there’s no tomorrow. Being on an independent label can be tough in terms of playing with the big boys, as Moz knows from his Rough Trade days, but to be on before U2 at Glastonbury and playing arenas without any record label whatsoever is unheard of. Ever the ambitious outsider, has Morrissey unwittingly set a revolutionary precedent in the music industry? The 1990’s showed that major record labels didn’t matter, will this decade show that record labels full stop don’t matter?

There has been much obsession over the last few years on the neccessity of record labels in the aftermath of the digital revolution. Morrissey has made it clear that he has very little interest in the digital revolution and that putting an album out in a Radiohead style is not something he wishes to do. After 1997’s ‘Maladjusted’ Morrissey spent a few years without a record deal but these were very much transitional years that he needed to ready 2004’s masterpiece ‘You are the Quarry’; today Morrissey is making it clear that whilst there may be no label backing for an album ‘ready and fluttering wildly against the bars’ he is going to carry on regardless, playing the kind of big venues he always has done. Whilst he may profess that his ‘talents do not lie in DIY’, in the abscence of a major record label or official management representation (Announcement) he’s doing a pretty good job of it. Every date on his 2011 UK tour was a sell-out, and he’s recently been playing big venues and festivals in South America, a tour he’s described as the best of his life.

The big question is, will this motivation to not let the major record labels grind him down carry on to a new record? Three new songs were performed in session for Radio 2 last year and further new tracks have peppered his set lists ever since, from the sweeping ‘Action is My Middle Name’ and Morrecone-esque ‘Scandinavia’ to the punk stomp of ‘Art-Hounds’. Indeed, after the impending high court case between Morrissey and the NME this summer is cleared up and Morrissey has played the Manchester date, will worrying about major label be something Morrissey even needs to do?

Perhaps the punk ethos that infuated Morrissey in his youth, and Shelagh Delaney’s ‘perfect example of how to get up and get out and do it’ (Morrisey’s comment) is motivating the veteran singer now more than ever. Either way, an unsigned artist playing arenas is strange territory for pop music and asks long overdue questions about the importance of the record industry in the music industry.