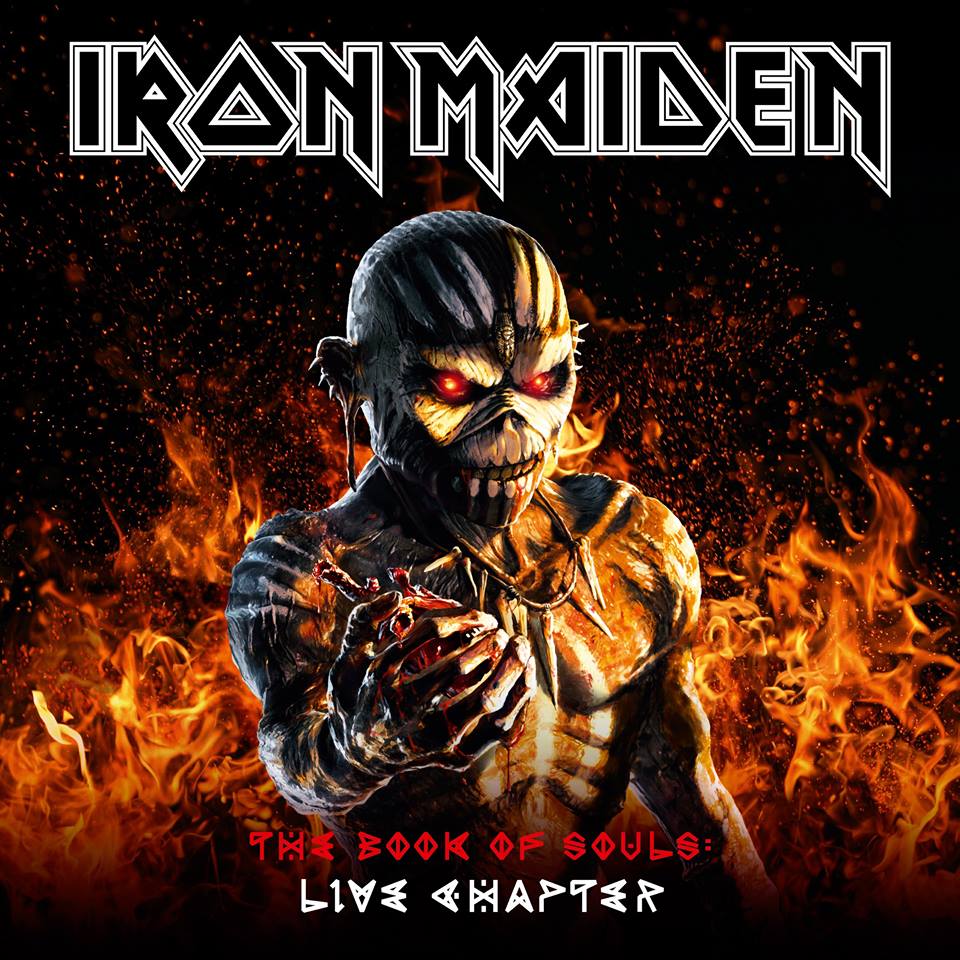 THE BOOK OF SOULS,  LIVE CHAPTER

Iron Maiden has a plethora of live albums. The most ardent fans don’t need an excuse to add another one to the collection. This is their twelfth live album and it has a lot to live up to with the likes of Live after Death, Flight 666 and Rock In Rio in that sum of albums.

This live recording comprises 15 songs captured during The Book of Souls World Tour, which covered 39 countries across six continents during 2016 and 2017, and was seen by over two million fans. Produced by Tony Newton and Iron Maiden founder member and bass player Steve Harris, the album is based on this tour’s set list and is a faithful record of the epic show, including six songs from ‘The Book Of Souls’, the band’s most recent studio album, along with many other classics and fan favourites.

The reality is that this particular live album doesn’t stand up to their other live output in terms of production and recreation of the Iron Maiden live experience. Steve Harris took on production duties for Iron Maiden’s early 90’s live albums (A Real Live Dead One and Live At Donnington) and they’re average at best on that front. There was also the very hammy Raising Hell concert in that bracket.

On this particular live album, the transition between songs is awkward and it feels like there is a lot of obvious and extraneous live crowd noise added to the songs to create ‘atmosphere.’ Having witnessed this tour on two occasions in 2017, I can safely say that extra atmosphere doesn’t need to be added as the band is one of the absolute best live acts in the world. Their stage production is second to none and the bands energy creates so much hype and excitement.

From a musical standpoint, the skill of the band cannot be questioned and would be ten out of ten each and every time. The newer material from 2015’s epic Book of Souls album is superb. The Red & The Black is Iron Maiden at their most incredible; a thirteen minute epic with glorious galloping tempos and quick tempo changes throughout. Opener, If Eternity Should Fail is also a huge highlight of this live set. The epic introduction to the song is enhanced when you witness the live video of the song.

Death Or Glory is a traditional Maiden stomper, but on this occasion be thankful you can’t see Bruce Dickinson prancing around with a monkey hat on encouraging cringe worthy ‘dancing’ to the lyric ‘climb like a monkey.’ The lyric does have historical credence, but it sounds awful as part of a song. Hopefully this will be consigned to the album tour.

The finest addition to the Iron Maiden repertoire from Book Of Souls was the title track. It is terrifically heavy in parts and has all the hallmarks of a Maiden classic. The acoustic introduction is unnerving and the crashing in of the main riff is astounding; Dave Murray, Adrian Smith and Janick Gers trade of furious solos throughout whilst Steve Harris’ bass thunders the song along at a breakneck pace.

With the latest album obviously making up most of the set, the rest is made up of Maiden classics and some omissions. For the first time in my memory following the band, Hallowed Be Thy Name is missing (due to legal wrangles over the song) and hits like Run To The Hills are rarely aired. However, there are the staples of The Trooper, The Number of Beast and Fear Of The Dark.

The highpoint of the album however, is reserved for 1984’s Powerslave though. Since the song made it’s reappearance as part of the live set when Bruce Dickinson and Adrian Smith re-joined the band in 1999, it has stood the test of time as an unheralded metal classic. Nicko McBrain’s drumming is phenomenal throughout and this is one area that the production should be commended; it is clear to see how good a drummer the bands elder statesman is as he traverses the abundance of tempo changes with aplomb.

One of the surprises of the last tour was the inclusion of Blood Brothers as a part of the encore. As one of the bands best songs the band’s reunion in 1999, Blood Brothers is another song of grandeur with a message of love, life and unity; it rightfully takes its place as part of the set here and shows just how strong Maiden’s output has been on a consistent basis. Set closer, 1986’s Wasted Years is arguably the bands most commercial moment, but again, the positivity of the song is life affirming…if only the sound of the crowd was more organic.

Whilst not being the best live addition to the bands discography, it is always nice to have a document of a tour that has been so successful for the band on many fronts. Maiden embarked on a huge tour but also visited many parts of the UK for this first time in quite a while; a feat they will replicate in 2018 with their retrospective Legacy of the Beast Tour. It was also a tour that saw Bruce Dickinson bouncing back from defeating throat cancer. To see him back on stage was and is an absolute joy – and his vocals on this album, especially Children of the Damned, show that he is as strong as ever and living up to the moniker of ‘The Air Raid Siren.’

For the misgivings I have with the album, a great part of the album is that the selections of songs are taken from all over the world. It’s always nice to say that ‘I was there!’ on a particular song; so a few locations are very lucky. Says Steve Harris: “We spent a huge amount of time working on this as I wanted to get it as close to the Maiden live experience as I possibly could and to represent our fans from different parts of the world. This meant listening to literally hours upon hours of tapes from every show, to select material and construct a sound that would run consistently across the whole album and capture the excitement of a new country like El Salvador alongside such regular favourites as Donington or Wacken.”

The band’s tour dates for their Legacy Of The Beast tour can be found here. Support comes from Killswitch Engage on most dates.