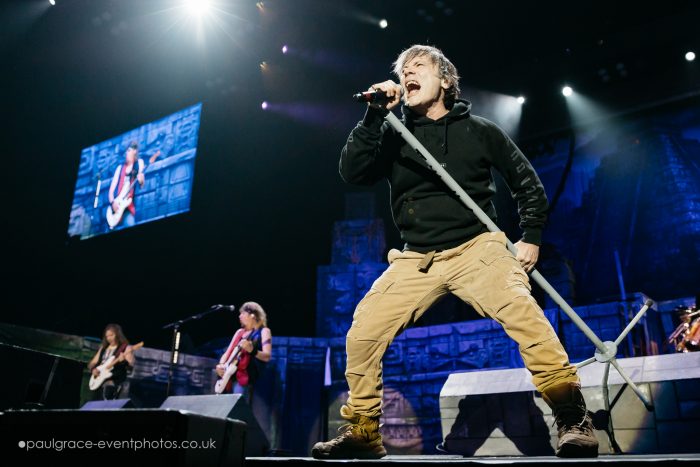 I’m at the second and final night of Iron Maiden’s sell out London shows marking the end of the British/Irish leg of a seemingly endless global tour. I’ve been a Maiden fan for decades (I remember buying the 7″ picture disk of Run To The Hills from WH Smith in Llanelli in 1982), but had yet to see them live. I really didn’t know what to expect after all these years, but from the fact that they’re still making great music and selling out huge arena shows I kinda guessed I was in for a treat.

The Iron Maiden brand is hugely impressive of course and its success can be attributed mainly to their no-nonsense classic heavy metal sound, but also to the incredible artwork which features across their merchandise range. I spot two large stalls selling T-shirts tonight and both have huge queues of fans eager to snap up some souvenirs from the show. The demographic is refreshingly wide from young kids with their parents all the way up to more senior followers and everything in between.

As is now tradition, Iron Maiden’s chosen intro tune is UFO’s Doctor Doctor and the track blasts out of the PA with its feel-good vibes setting up the scene perfectly. The fans go crazy as the song and house lights fade, while video clips with digital depictions of their infamous mascot Eddie are projected onto enormous screens high above the stage.

The wailing horns of If Eternity Should Fail pierce the dark void and vocalist Bruce Dickinson rises out of a smouldering cauldron bellowing its opening lines. The track slowly builds until the stage explodes in a ball of flames revealing the rest of the band and, with it, the arena erupts.

It’s always so great to see a band who obviously enjoy what they do and tonight is no exception. They’re larking around, laughing with the crowd and, most importantly, clearly loving playing their music. Their infectious energy is endless and throughout the two hour set they bounce around the stage throwing some awesome classic rock star shapes. 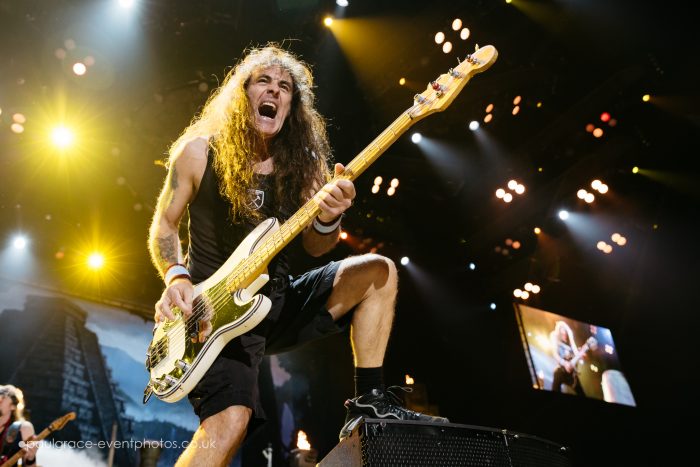 Songs from 2015’s The Book of Souls album are obviously in the majority, but there are plenty of classics on offer too spanning their entire enormous catalogue. During The Trooper, Dickinson dons a vintage soldier outfit and waves a union flag, and later on a 15 foot Eddie comically chases the band around the stage. It’s great to hear that the air raid siren is in full working order and that Dickinson is still hitting those high notes with ease. Moreover, the passion and force with which he delivers his vocals is breathtaking. He gives a unifying speech paying respects to the lives lost in the recent tragic events in Manchester’s MEN Arena, while also celebrating diversity and welcomes the coming together of all the races, religions and genders at Iron Maiden shows. He goes on to reveal that he was concerned by the huge police-with-guns presence tonight, but was told that this was because they were all Maiden fans so had requested to be put on duty specifically for this show. The crowd, of course, react with a roar of approval.

Musically the performance is accomplished and effortless. The Number Of The Beast still sounds as fresh today as it did back in the ’80’s and the absolute highlight goes to Wasted Years, the guitar intro of which sends shivers down my spine.

After two very intense hours of high octane theatrical action I’m exhausted, but very satisfied. Iron Maiden completely smashed the O2 tonight and are still clearly very much at the top of their game. Massive respect.