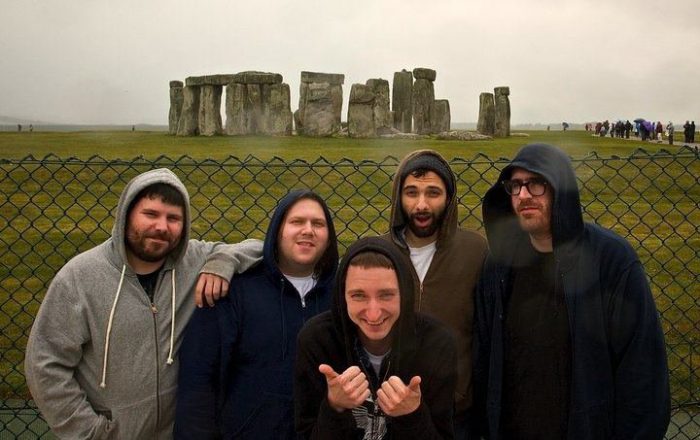 Long Island’s melodic punks Iron Chic rock up to Manchester with their hearts on their sleeve and proceed to tear the city a new one. Louder Than War’s Dave Beech was there.

Once harbouring a reputation as one of Manchester’s premiere metal venues, Rebellion, thanks in part to its new management, is beginning to shake that image by not limiting itself to any one scene. To prove that point, tonight sees Long Island’s Iron Chic take to their stage almost exactly a year since their last Mancunian sojourn.

Taking to the stage in front of an impressive (and well-watered) crowd for a Tuesday night, the band waste little time in launching in to ‘I Always Never Said That’ from their debut. Setting the precedent for the following 90 minutes, singer Jason Lubrano channels all the anger and aggression of their recorded output and multiplies it tenfold. The piss and vinegar of his lyricism, combined with his fire in the belly delivery, resonating with an audience that screams back his every word.

While tonight’s venue might lean towards the smaller end of the spectrum, the atmosphere inside is nothing short of palpable. Tracks such as ‘Timecop’ and ‘Don’t Drive Angry’ are met with rapturous response, with more than one crowd surfer propelled towards the stage in perpetuity.

That band’s like Iron Chic can foster such an emotional response in their audience is a testament to the solidarity, and indeed the catharsis of punk rock’s modern, more melodic iteration. Having always been something of a unifying force, it seems now, more than ever, people need these sort of bands in their lives. Far from the primitive politics of the ‘70s and ‘80s, the onus now has shifted to more introspective topics such as mental health, something which speaks volumes to a modern audience who grew up on a steady diet of Myspace and ‘00s emo.

This shift is perhaps most noticeable when the band launch in to the Ramones’ ‘Bonzo Goes To Bitburg’. It’s here that the first and indeed only lull of the set takes place, the punk classic eliciting a reaction only from those of us more grizzled than some of the fresher faces in attendance. As if to prove said point, the band finish the set proper with a raucous rendition of ‘Time Keeps On Slipping Into The (Cosmic) Future’ before disappearing, only to appear for an encore moments later, launching in to a cover of Green Day’s ‘She’, sending the whole crowd in to a nostalgic frenzy that only stills long after the band have left the stage for a the final time.