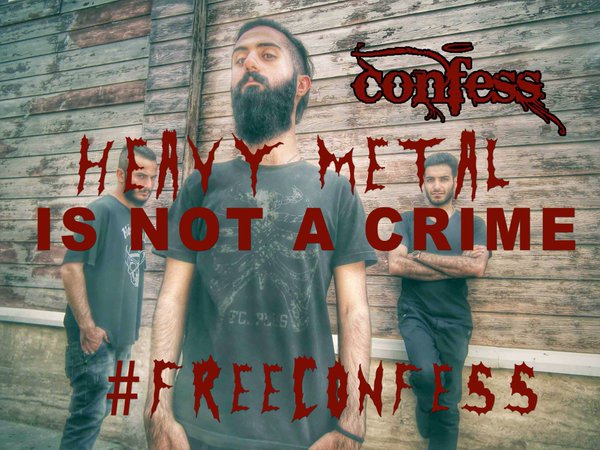 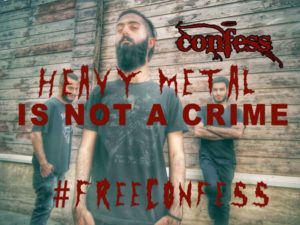 Just as Iran seemed to be opening up and there was evidence of a vibrant musical scene there we are getting news that a metal band called Confess have been arrested and face long jail sentences.

Confess members Nikan Siyanor Khosravi and Khosravi Arash Chemical Ilkhani were arrested by the Army of the Guardians of the Islamic Revolution and allegedly seized all of their personal online accounts, including e-mail and Facebook, although as of this writing their profile on Facebook is still active.

They are facing charges of blasphemy, advertising against the system, running an illegal and underground band and record label promoting music considered to be Satanic, writing anti-religious lyrics and granting interviews to forbidden foreign radio stations. These serious charges resulted in the two band members, aged 23 and 21 sitting in solitary since last November until finally making bail on February 5th, paying the equivalent of $30,000 US.

The two musicians could face 6 months to 6 years in prison on the basic charge of blasphemy and if convicted of blasphemy they could even be executed. Surely an all powerful religion has little to fear from a rock band.

The band’s new album, In Pursuit of Dreams, also features tracks titled “New World Order,” “Teh-Hell-Ran” (a play on words of the Iranian capital Tehran), “The Alphabet Of Power” and “5 Years In A Cave.” It was released on the group’s own label, Opposite Records.

Metal Injection website has started a campaign to bring awareness to the musicians plight .

‘We’re not exactly sure what we can do to help the band at the moment, but we figured raising awareness is a start. We have started the hashtag #FreeConfess. Feel free to grab the image and/or retweet:’