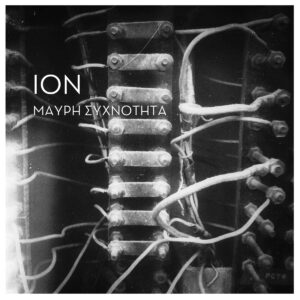 ION is the solo project of Greek musician and sound artist, Giannis Papaioannou, the lead member of post-punk electronic band Mechanimal. When leaving behind the heavy industrial pop of the group, Giannis moves towards an unpredictable ambient/drone sound.

With second track Fjord, for instance, the simple beginnings build and build to make a fabulous drive-easy concoction of pulsing resonances and gentle bass tones. Giannis is careful not to lose the album in a sea of nothingness as the often misunderstood form of drone is dismissed and instead he opts for semi-ambience and synth wisps.

She Was A Normal Girl contains echoing effects but also has a simple hook that casts an affectionate glance in the direction of Jon Vangelis as it does anything but complicate a simple and effective idea, instead building on a theme that induces calm and respite.

These 13 tracks show that a break from the heavy thunder of Mechanimal is a welcome retreat for Papaioannou and We Waves is effortlessness personified. It breezes through an easy drum shuffle with tendrils of unpretentious hooks and maintains a scene of tranquillity throughout.

Ektachrome does much the same with slightly more involved guitar effects that bring the track forward to a more solid and harsher presentation whilst still maintaining the unruffled, almost scientific edge.

Once more, Campfire raises the dense base to maximum effect without taking proceedings too far and spoiling the mood already created. Album closer Unreal at almost ten minutes is probably the track most akin to drone on the album. It broods and agonises with sweeping keyboards twisting in and out of an already sparse background, and perhaps alludes to the darker haunting sounds captured by the Mechanimal project and which create a logical link to ION.

Μayph Σyxnothta is pleasing to say the least. It marks another step in the impressive portfolio of Giannis Papaioannou and can do nothing else but to enhance the presence of his work outside of his homeland.