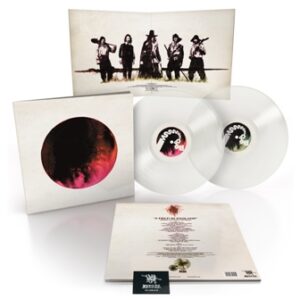 ‘A Field In England’ is one of those rare films that can be truly labelled a masterpiece. Set on the margins of the English Civil War the film, starring Reece Shearsmith & Michael Smiley, ‘A Field In England’ is an impressionistic horror that descends into psychedelic fever (or “wonk” as our chief John Robb would term it).

Aiding the atmospherics is Jim Williams’ (Raw, Kill List) sparse and brooding score that uses textures from the period of which the film is set before morphing into a more electro-psych oppressive style. The soundtrack also features Blanck Mass’ stunning Chernobyl in what is, in the mind of this writer, one of the single most disturbing and enthralling scenes in modern British cinema.

Previously released on Rook Films as a 400 copy ltd run, where the prices on the black market have risen to over £250.00 per copy, the Invada reissue uses the same artwork and comes with a digital download card and whilst it does not contain the originals poster, the reissue does come on a 2 x frosted clear vinyl. The mail order exclusive version will be on sale Friday 29th March with the retail version following in April.

This is a release not to miss and if you’ve not seen A Field In England then we at LTW would encourage you to do so as soon as possible. It’s one helluva trip.