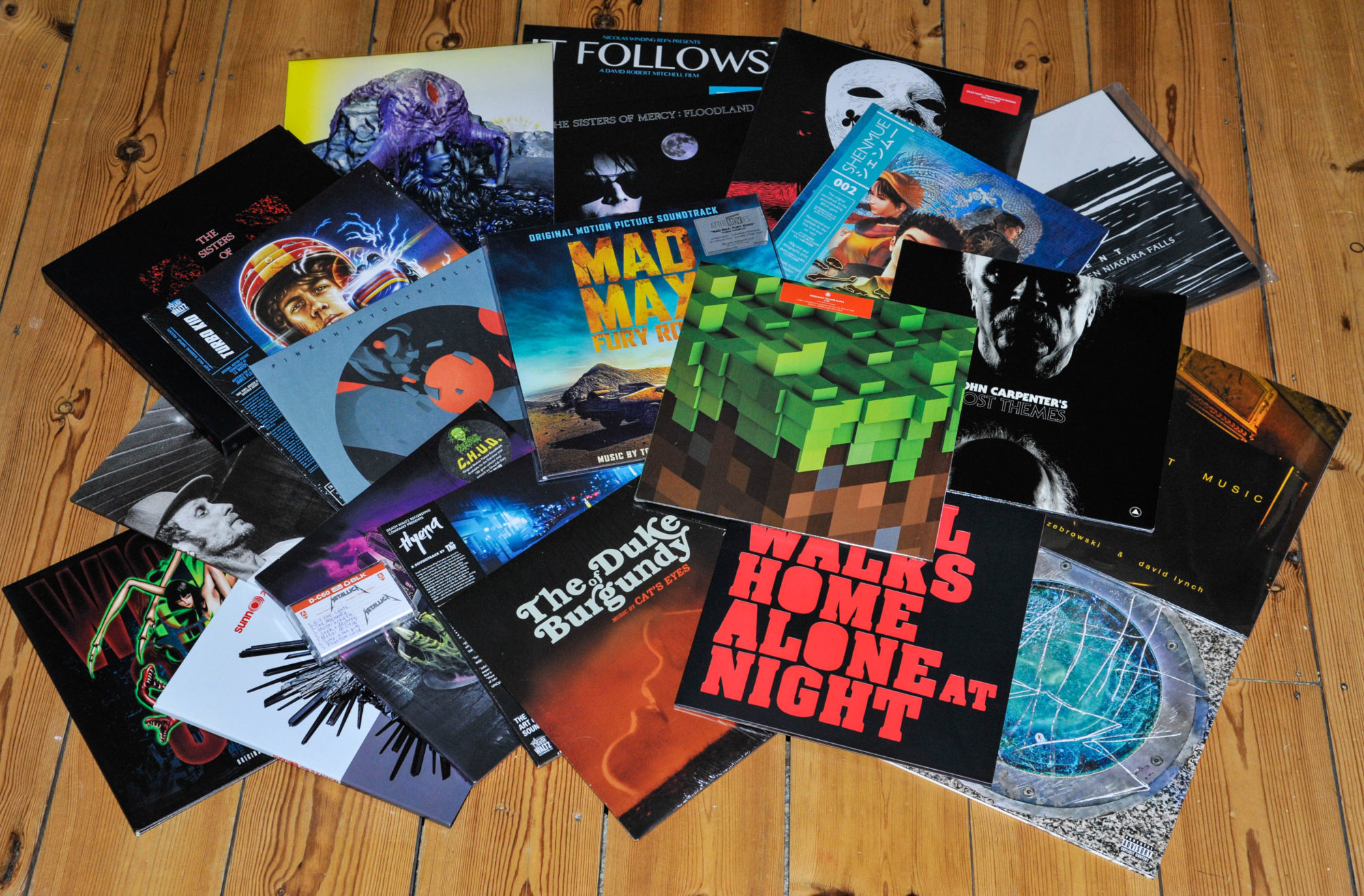 It’s been another fantastic year for Bristol based label Invada Records with releases by Beak>, Geoff Barrow & Ben Salisbury, Brian Reitzell, and Sleaford Mods all being on many a discerning vinyl addict must-have lists. With ’16 already looking like it is going to be another bumper year, and with much anticipated releases by Thought Forms (the bands third album is one that many of us a particularly excited about) another score by Geoff and Ben, plus the scores for Bone Tomahawk, Nightcrawler and Couple In A Hole, it is safe to say Invada Records will once again prove themselves to be one of the finest independent labels out there.

With that, LTW are proud to publish Invada Records label manager Redg Weeks’ diverse and exhaustive ‘Top 25 Albums Of the Year’.

“More than any other year I’ve really struggled to get my list condensed to just a top 20 – so this year I’ve had to extend my picks to a top 25.

Record labels seem to be coming up with the goods more so than ever, and quality control is at an all time high.

Film & Video Game Soundtracks have once again reigned supreme within my selections ; Whether this is a trend that will continue over the next few years remains to be seen, but personally I enjoy the diversity movie & game scores bring to the table.
As with previous years, I’ve continued with the  ‘no trumpet blowing’ policy and banned anything on Invada.
I’ve grouped a couple of my artist choices together – so technically there are slightly more than 25 albums.
Finally once more its worth stating – my Top 25 are made of contemporary newly released albums, reissues, compilations, and a mixed bag of all genres.  Its simply a compiled list of my favourite records I’ve picked up this year (+ a goth anecdote thrown in at the end)” 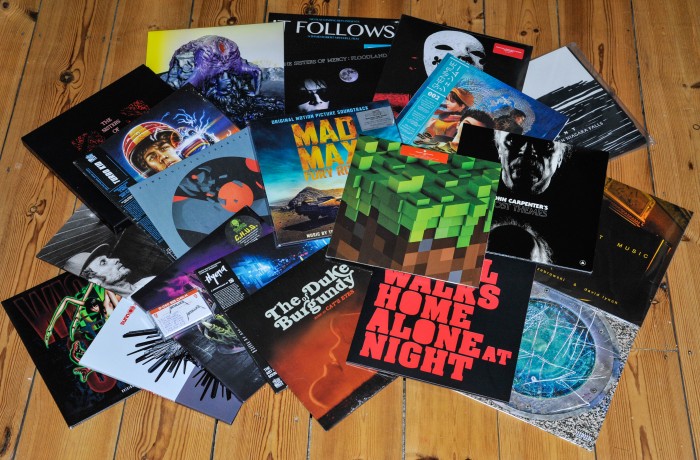 Geoff (Barrow) and I watched this film at Invada studios and after hearing the score (within the film), we both agreed straight away that we wanted to sign it to our label. For whatever reason it didn’t materialise – but I was really happy it did get released by Caroline Records and I picked up an LP.  Cats Eyes are Faris Badwan (The Horrors) and Rachel Zeffira , they previously released a self titled album in 2011 that I was equally impressed with.
https://www.youtube.com/watch?v=sgziVX26p_A
20
The The : Hyena OST LP (Death Waltz)
I’m a huge The The fan – so had major envy when I heard Death Waltz were releasing the Hyena score as an LP.   I picked up the deluxe CD / book of the album on another label so was already familiar with the electronic score.  Musically, parts of the soundtrack reminded me of Cliff Martinez’ more recent work but you can still hear Matt Johnson’s unique production and writing technique.
https://soundcloud.com/cineola/the-invisible-city-reap?in=cineola/sets/hyena-original-soundtrack-by
21
Wicked City OST LP (Tiger Lab)
Alongside the sublime Data Discs label – Tiger Lab is another record label that has taken the soundtrack world by storm in 2015. Set up solely to release Anime scores. Wicked City was an album i played digitally non-stop until i was kindly sent the LP.  To quote the label themselves, “Wicked City is an electronic score filled with goth-esque pads, lounge piano line, 80s bass grooves and classic drum samples composed, performed , arranged and written by Shoji”
It doesn’t disappoint and I can’t wait to get my paws on Tiger Lab’s latest LP release ‘Devilman‘.  A label I look forward to watching develop in 2016
https://soundcloud.com/noisey/01-prologue?in=noisey/sets/wicked-city-original-soundtrack
22
Pinkshinyultrablast : Everything Else Matters LP (Club AC30)
You can always rely on the chaps at Club AC30 to come up trumps with their signings. Pinkshinyultrablast are a shoegaze / dream-pop band from Russia.  Their sound in places isn’t a million miles away from our very own The Fauns, and they certainly have a strong leaning to the late 80s early 90s UK indie scene.  What interests me most about this band aren’t the melodies or guitar effects normally associated with the shoe gaze movement, but the fact that 90% of the songs on this album could pretty much be radio singles.  For a debut album it’s incredibly well focused and I was very surprised it was their 1st proper long player.
https://www.youtube.com/watch?v=z-cISmtXk1M
23
Shogun Assassin OST Cassette (One Way Static / Light In The Attic)
My good friend and owner of ‘One Way Static’ Seb, kindly sends me everything on his label and we regularly spin all of his beautifully designed horror soundtrack LPs in the office. This release was pressed onto cassette and is my favourite OWS release of 2015. If this is still available its 100% a must to track down and pick up.
https://soundcloud.com/onewaystatic/daigoros-theme-shogun-assassin?in=onewaystatic/sets/shogun-assassin-original-1980-motion-picture-soundtrack
24
Death Grips  – The Powers That B LP (Harvest Records)
A fourth (and final?) studio album from the mighty DG – A double LP that compromises of ‘Niggas On The Moon’ and ‘Jenny Death’  both of which were released digitally prior to this getting a full physical release.  Whilst not my favourite DG record – the aggression and energy is predominant throughout and the record never gets stale despite its length.
https://www.youtube.com/watch?v=SxPYk_8Vrn4
25
Sisters Of Mercy – First and Last and Always / Floodland Deluxe Box Set LPs (Warners)
Being a ‘Metal kid’ in the early to mid 80s was like swearing your allegiance to a football team – once you’ve made your decision there’s no going back. There’s no way you can appreciate other forms of music, nor associate yourself with ‘the other lot’ – GOTHS.
Goth is a misused word nowadays, and at the risk of sounding like a Grandad the younger generations have hijacked the term and now use it ‘willy-nilly’ to describe someone if they simply wear black.   The simple truth is If you’ve never listened or appreciated the 1st two Sisters Of Mercy albums you are simply not allowed to be called a Goth.
My point blank refusal to give S.O.M a chance because I was too busy listening to Venom, Metallica and Metal Church was my own downfall. Luckily by 1990 (and an enrollment on a  BTEC course at Bath College) my eyes & ears had been opened- I had met some of the ‘other mob’ and realised they weren’t all bad.   These two albums were played non-stop by all those around me and I couldn’t avoid them.
I previously owned these albums on cassette and once in a while played them on my battered tape player  . This year however both albums have been re-presented as anniversary deluxe box-set LP’s also containing all the 12″ singles surrounding each full length release.  Not only is the packaging utterly beautiful (obviously all black) – but there are a lot of tracks / re-mixes I had never heard that really cement why these are included in my best of the year.
https://www.youtube.com/watch?v=dxucr5TSxDg
https://www.youtube.com/watch?v=9rtru1NkTKw
~

Redg himself can be found on Twitter as @redgweeks and his Invada Records copilots go by the handles @jetfury (Geoff Barrow) and @fatpaulpresents (Paul Horlick).

All words by Redg Weeks.