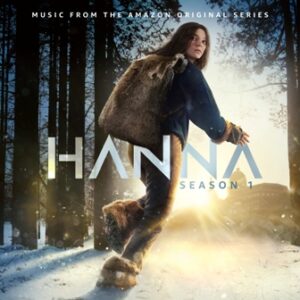 Invada Records and Lakeshore Records have announced details of their forthcoming ‘Hanna: Season 1 (Music From the Amazon Original Series) release which features an original score by Geoff Barrow and Ben Salisbury plus music by Karen O, The Insects, Beak>, Simon Ashdown and Yann McCullough.

This Friday (29th March) sees the digital release of the score for the acclaimed Amazon Original series ‘Hanna’.  Speaking of the soundtrack Geoff Barrow says:

““Because of the size of the HANNA series, we had the opportunity to bring our own team of artists and composers. The Producers had already contacted the amazing Karen O who’s song “Anti-Lullaby” formed a theme that was continued throughout the series. It was also great to work with our friends The Insects (Massive Attack co writers Bob Locke & Tim Norfolk), Simon Ashdown & music editor turned composer Yann McCullough.”

“The score for the series was mainly inspired by the character of Hanna herself, and her forest upbringing. Even though the music is sometimes processed, it is always based on something real and organic rather than pure electronics. We often used layers of woodwind instruments (including some fairly unusual ethnic flutes and pipes) as a way of linking Hanna to the natural world in which she was brought up, and also to try and capture her fierce animal spirit and her sense of wonder as she experiences the ‘new world’ beyond the forest.”

Aside from Barrow and Salisbury’s score the soundtrack also features Beak> Wulfstan II which was originally found on the bands second album plus Karen O covering Smashing Pumpkins’ Bullet With Butterfly Wings and a whole lot more making this one of this years essential releases.