Home featured PJ Harvey’s ‘All About Eve’ Score To Be Released Via Invada Records... 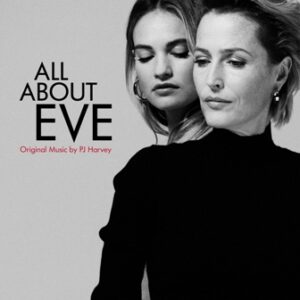 This Friday (12/04) sees the digital release of the All About Eve—Original Soundtrack, composed by double Mercury Music Prize-winner PJ Harvey via Invada Records in conjunction with Lakeshore Records.

The 12-track album contains 10 original pieces of instrumental music as well as two new songs written by Harvey and sung by Gillian Anderson and Lily James.  Harvey’s score for All About Eve, is performed by herself, James Johnston and Kenrick Rowe, and uses Franz Liszt’s ‘Liebesträume’ (a musical element of Joseph L. Mankiewicz’s original 1950s classic film) as a musical touchstone, exploring the more somber and deeply psychological aspects of the story.  The album is produced by PJ Harvey, with additional production and mixing from Adam ‘Cecil’ Bartlett.

Harvey, whose career has included extensive soundtrack work in theatre, film and television began her collaboration with director Ivo van Hove (currently on Broadway with Network) late last year for a modern stage adaptation of the classic 1950 Academy Award-winning film. The play, starring Gillian Anderson (X-Files, The Fall, American Gods, Sex Education) and Lily James (Mamma Mia! Here We Go Again, Baby Driver) is currently on-stage at the Noël Coward Theatre in London’s West End, where it will run until May 11. The play will also be broadcast to thousands of cinemas around the world from April 11, 2019 through National Theatre Live.

On composing this score, Harvey says, “I have always loved stories, and so to compose music to support and enhance a story being told is a challenge I enjoy. I also love the freedom that working instrumentally can give me without the constraints of song form.”

“For All About Eve I chose to work with my long-time collaborator James Johnston as he has a soulfulness and sensitivity to his playing that inspires me. I also worked with Kenrick Rowe who has a versatility to his drumming I knew I could experiment with until I found what was right.”

“Ivo wanted to take the play into a non-specific era, so I suggested that in a party scene we could play a contemporary piece of mine, or a song that Margot could sing rather than the existing piano piece by Liszt. Ivo loved this idea and thought that it would be good for Eve to sing a song too, so I worked on songs that had the emotion and lyrics that would be fitting for their characters at the time they appear in the play. Gillian and Lily have brought the songs alive and made them their own, and I think they give very moving performances both on the recordings and on stage.”

Van Hove describes Harvey’s score as, “Very simple, but in its simplicity, it’s complex.  The images that she uses are very concrete, but at the same time little bit mythical.  A song can bring into a few minutes a huge world alive.  Where we in the theater need perhaps five or six pages to establish it, a song can do that within a few lines.”

Details of a physical release will be announced soon and a full Louder Than War review is to follow.