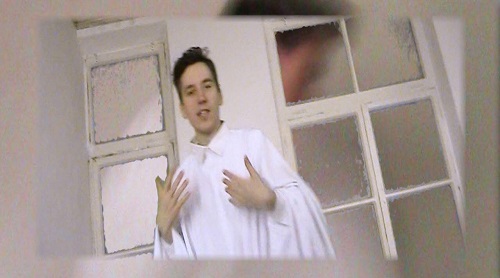 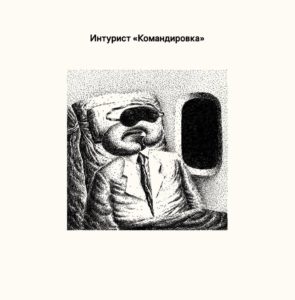 Jenya Gorbunov is not a name familiar to many outside of Russia’s alternative scene, where he is regarded as something of a cult hero. For the record, Gorbunov co-runs the stimulating label, Incompetence, with Andrew Lee (who plays in Obgon, and is bandmate of yet another Gorbunov venture, Interchain). And doubtless some decadent Western bourgeois types may also know he is the guitarist in the truly brilliant Moscow band, ГШ / Glintshake. References to ГШ should end immediately, though, as Inturist have a “sonic thing going on” (maaan) that is entirely their own. This, their new LP, Командировка (Business Trip) is certainly proof of that.

I’ll go on record right now and say that, once you get hooked into Командировка you will find it very difficult to dislodge from your brain. It’s not as if it’s full of hook-laden, hit-tastic music or full of sonic “money shot” moments. On the contrary, it’s a cussed beast. Rather, Командировка is almost sinister in its addictiveness. It has a presence that can’t be ignored – and is satisfied to wait for you not to ignore it – even when your mind is elsewhere. A beautiful annoyance. Imagine dipping into an endlessly replenishing bag of crisps; you have been warned. The melodies aren’t obvious, or sometimes initially sound a bit undercooked. But they reveal themselves fully over time. Tracks like ‘Polez’ (no translation possible!) sound like nothing in particular, but later out themselves as masterful thriller soundtracks. And cuts like ‘Перемещение вокруг’ (‘Move Around’) sound like Julian Cope Fried demos; winsome, stripped down, inward looking and only revealing their true beauty after a day or so’s repeated listening.

There’s also a feeling in this reviewer’s head that there is an element of musical bipolarity to Командировка. Some tracks sound they have been made by an inquisitive restless loner, which the affable Gorbunov most certainly isn’t. And sometimes it sounds like a truly communal spirit guides the record. Maybe it’s because Inturist is a floating concern when it comes to live performing: as they can perform as a full band, and as a solo project. Maybe that is what gives this music a sense of being balanced on a knife edge; between internal logic and external expression.

You want musical references? Well, thoughtful types can maybe hear the itchy grooves of Aksak Maboul and the avant-garde post-punk music that came from the Benelux in the late 1970s; the Dutch Ultra / Plan K scene, Minny Pops, Minimal Compact, The Young Lions, that kind of thing. But mostly I’m reminded of the avant-garde absurdity of the early 80s Crammed Discs label, the stuff arty loons like Hector Zazou made. You can hear a bit of Cold War kitsch too; Associates’ ‘Q Quarters’ taps hard on ‘Окно’ (‘Window’ aka ‘The Break’). Others may hear echoes of more contemporary soundsmiths in these quizzical songs, such as the work of Zea, aka Arnold de Boer, singer of The Ex.

But for all the artiness and angularity there’s a slacker vibe too. There are some obvious, Barrett-esque drops in key; or Studio 5/Bruce Lacey experiments in fucking about. Take ‘Взрослый мультфильм’ (‘Adult Cartoon’): surely the sound of a bunch of pissed up bluebottles and wasps trying to get a taxi. Or the brilliantly obtuse ‘профилактика’ (‘Prophylaxis’). Then there are the wobbly, queasy guitar licks in ‘Не обещай’ (‘Don’t Promise’) and the outstanding raga work out, ‘Много раздражающих (‘Lots of Annoyed’), which are reminiscent of the fretwork Happy Mondays’ Cow used to indulge in round Bummed. Lots of the sound effects have a Hannett-like feel to them, such as the squidgy synths on ‘Друзья моего отца’(‘My Father’s Boyfriend’).  You get a sense of Gorbunov’s good nature on these squiggly interludes; strange noises blurt and jabber away, or pop up like jack-in-a-boxes without a please or thank you. Just check the brilliant, Laughing Clowns-like excursion, ‘Внутренние решения для всей семьи’ (‘Interior Solutions for Whole Family’).

These sonic collages may owe a lot to Conny Plank and Dieter Moebius, but the results never sound reverential or lazy, or an exercise in showing off. Somehow Gorbunov and his cohorts genuinely sound in love, fascinated, with each sound they make. And that rubs off on the listener. This record is jammed with incredibly refreshing music; something that needs to get under your skin.