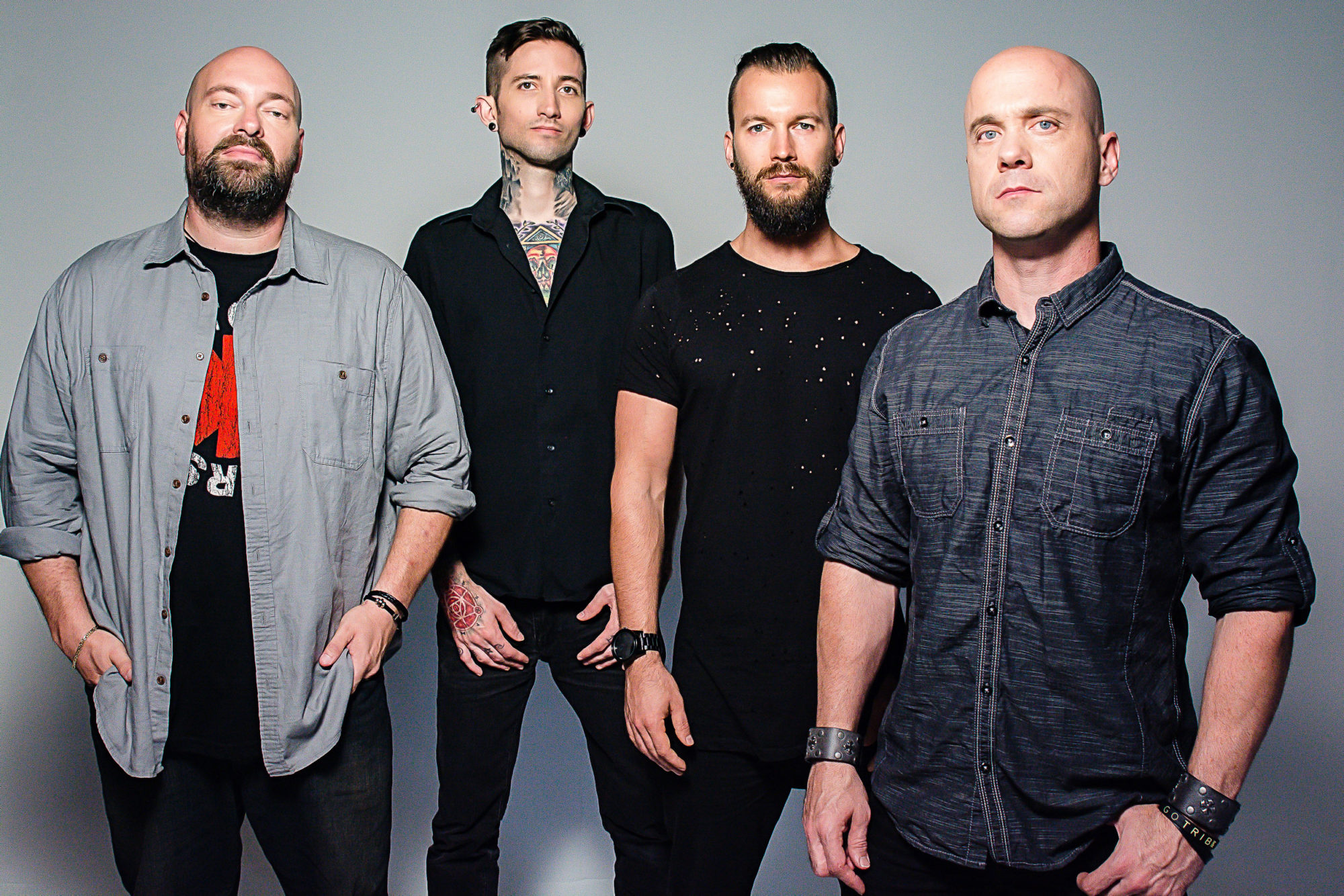 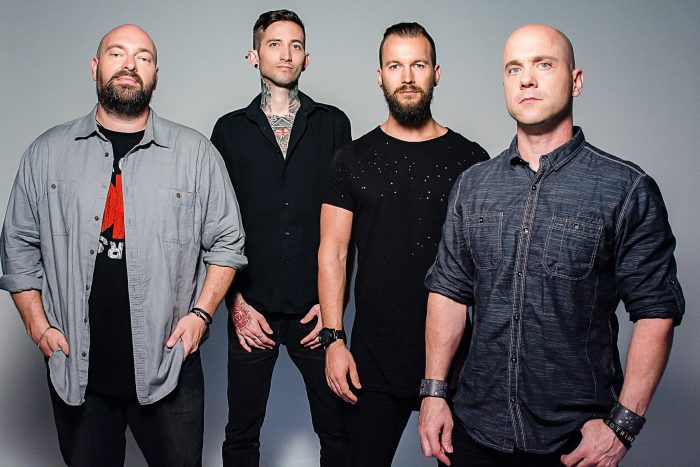 “Faces” features a guest appearance by the iconic guitarist, John Wesley, on their song ” Not Like You”. The members of Winter Calling currently write and record for film and network television, including: ABC, Netflix, and Fox.

Louder Than War: You guys are probably one of the most musically explosive bands I have heard in a very long time. Who writes the songs, and what inspires the songs?

Ian: We pretty much write together in a back and forth manner, sending ideas to each other online. We record everything in our separate studios and Wayne is the mastermind who puts it all together so it makes sense.  For the original musical ideas themselves, hopefully they are derived organically as a summation of all life experience and emotion, distilled into melody and rhythm through a shifting of consciousness.

Chris:  Personally, I wait to hear the musical pieces and I allow it to take me somewhere. As soon as I’m happy with where that piece of music took me, I start to translate where I went on paper. On this album in particular I saw a whole story being played out in my head. It tells a story about how bad circumstances led to coping mechanisms like dissociative identity disorder and addictions. The whole album is one person’s story, but each song is from the perspective of a different personality within that person.

Do you plan a tour to support “Faces”?

Wayne: We definitely want to do something! As independent artists without the benefit of much in the way of financial backing, we have to find the right opportunity. Right now, for us, that may manifest as an opening spot for a well-established act or focusing on festivals. Most of our fan-base is overseas so we recognize touring in the US without other established artists on the bill could be a challenge.

I love the name, Winter Calling. How did you arrive at it?

Wayne: Glad you like it!!! Personally, I’ve also always been drawn to the diverse symbolism of winter in literature as well as the actual season itself. Much like in literature, winter has represented a range of meanings and stirred a range of emotions within me throughout my life. It can be dark, it can be tranquil, it can be lonely, it can be harsh, it can evoke loss, it can be a place of peace and solitude, it can represent inner struggle… no matter the meaning at the time, it has always “called” to me throughout life.

I’ve found the same to be true of much of our music. Listeners hear different truths depending where they are in life and what they are going through. So, out of a few name options that we were considering, Winter Calling seemed to stick as the right fit.

All of you have been in the music business, how do you think it’s changed?

Wayne:  Wow, what a question! Where to start!?! Obviously, technology has had an enormous impact on the business and somewhat turned it on its head! As artists we’ve been blessed with the means to reach people and release music across the globe with relative ease. In fact, just the other day, I was chatting with a fan in Portugal and a fan in Mexico at the same time. I mean, how amazing is that?!?

At the same time though, technology has also brought about changes that have made it quite challenging for artists to make a living. I’m sure many music fans have already seen articles pertaining to how streaming has impacted the financial stability of both artists and businesses. Unfortunately, many artists that we love just do not have the financial resources to release another album or tour. Reality struck me when I went to a local music store and found a five-time Grammy nominated and one-time Grammy award winning audio engineer working behind the counter. I remember thinking how crazy it was to see him selling instrument cables when he should be in the studio making another record. I get a little down sometimes when I think about all the music that is not being recorded that the world will never hear due to the current situation.

My hope is that the current uncertainty and struggles will bring fellow artists and industry businesses together to form a tighter community. It’s a tough time for many in the industry so we try to build relationships and help others in this crazy business any way we can. Coincidentally, our relationship with James Moore and the good folks at Independent Music Promotions is actually the reason this interview is happening. Thanks James!!!

The good news for us is that most hard-rock and metal fans are passionate about their bands and recognize what’s going on in the industry. If they like you and believe in what you are doing, they will still buy your albums and concert tickets to keep you going!

Do you think that the lyrics to your songs are like a lifeline to people who you will never meet?

Chris: Yep, that’s why I take lyric-writing so seriously.

Tim: I’d like to think so. This album (Faces) focuses on a few important mental and social issues such as drug abuse that many people will be able to relate to, and maybe put their own problems and addictions in a different perspective.

Ian: I most like the lyrics which are more ambiguous, they allow for each person to interpret in their own way and apply their own meanings based on their own experiences, no matter what the original intention behind the lyric may have been.

Your music is so powerful, is there a track on the new release that means more than all the others?

Chris: “Faces” tells a story from beginning to end. Every song on this album plays an important part in telling the story so it would be difficult to say one is more important than the other.

Ian: I think for most of us our favorite tracks change over time. As we were working on them usually whatever was the most recent one we were doing was the favorite until we wrote a new one and then that was the favorite – that’s kind of how it goes.

Tim: My personal favorite is “Follow Me Down”, but that has changed throughout the writing and recording process. Follow Me Down became my favorite after we finished the accompanying video… I guess it was actually seeing a physical realization of the story of drug addiction, metaphorically, that made me appreciate Chris’s lyrics, and also appreciate how the story is woven into the music, as the person is drug down into the spiral of addiction. Powerful stuff.

How did you guys originate?

Wayne:  Ian and I have been friends since childhood, but never really had the opportunity to make music together. We had been living in different cities, but happened to bump into each other at a Jon Oliva show in St. Petersburg, FL in the winter 2013. I had been writing strictly film/tv music for quite some time at that point and was dying to satisfy my thirst to get involved in a heavier project again. I thought it would be incredible to have the opportunity to write and record with someone as talented as Ian so I was thrilled when he agreed to give it a go. From there we approached Tim, another unbelievable musician who happened to be a friend of mine. Once Tim, Ian and I found a little chemistry together we discovered Chris and were awe-struck by his raw abilities. We sent him some tunes to see if he was interested and he was in!!! It kind of all happened very quickly… now I sit here reflecting on what has transpired and cannot believe that I’m able to write, record, and play with musicians of this caliber. And, not only are these guys fantastic artists, they are also genuinely good people! I am a blessed dude!!!

Wayne: We try to put it everywhere for them… almost all the streaming services, YouTube, Facebook, and most online stores (iTunes, Amazon, CD Baby, etc.). I know some artists are trying to limit the free access to their releases to generate sales, but we are taking a different approach. Basically, we’re betting the house on our fans! By that I mean, as of a couple weeks ago, we’re giving free access to high-res, commercial-free copies of our albums on YouTube; believing that in return, those who like our music will make a purchase. Even if they just purchase one song, it goes a long way towards funding future albums, videos, and tours. Our fate rests in the hands of the listeners. I suppose that’s really the way it should be anyway.

What’s next for Winter Calling?

Wayne: At the moment, we are working with the incredibly talented videographer, Blake Cortes, on a series of music videos to support the new album. Once we wrap those up, we’ll either be looking into live shows or a live, acoustic album and DVD.

How would you define music?

Tim: To me, music is similar to a photograph… it is a symbol that invokes feeling and memories, as we all have songs that we equate with certain times or occasions in our lives. It’s powerful, and stands on its own. Music has had a profound impact on every aspect of my life.

Wayne: For us, I believe our music is a reflection of our hearts and souls… who we are, what we have been through, and a glimpse of where we are going.

Ian: Music is a sound or collection of sounds intentionally arranged in a manner in order to provoke emotion in the listener.