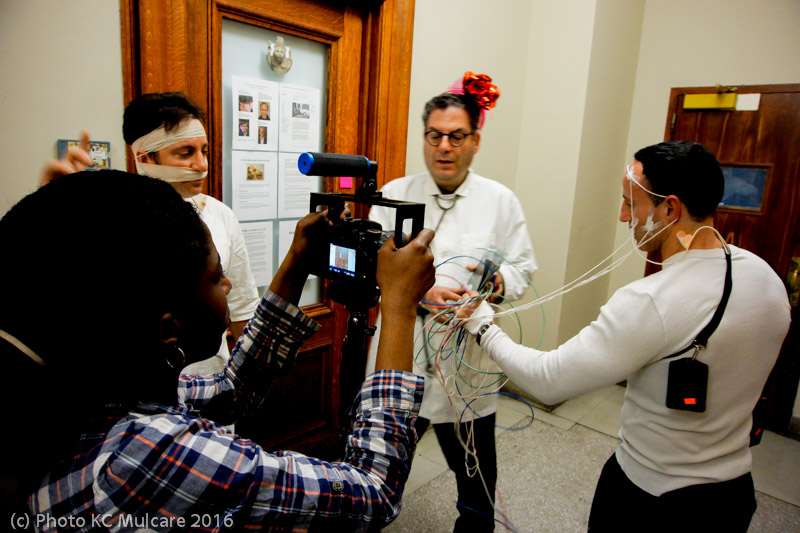 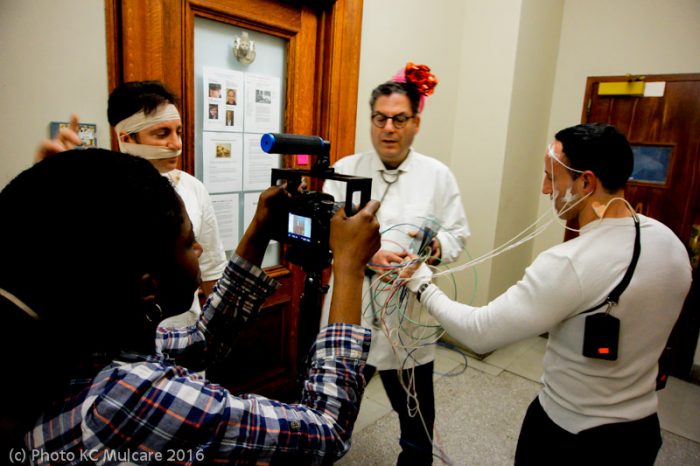 This imaginative, indie-cult, Vampire, Zombie, filled, original film, created, directed, and produced by mastermind Eric Spade Rivas, has plenty of heart, and promises to leave you dazed and bewitched in the most celebrated way.

Louder than War was fortunate to speak to most of the actors as well as Rivas.

So Eric, what’s the premise of the film?

The premise of the film is vampires fighting zombies, fighting bikers. It’s sort of like a big chaotic dream. I’d liken it to Fellini stuff, I am not saying I’m Fellini, I’m just saying that Fellini has a lot of scenes that seem to be about the excitement of the moment, like seeing something very bizarre, and then letting the audience go through it. What really happened in the film is that we are in a hospital. Michael Musto is an evil doctor who puts me to sleep, and my dreams go into all of the recipients that are in the hospital. We all have to live through the same dream. At the end of the day we are not zombies or vampires, we are really victims in the hospital.

Now, you don’t want to give it all away. Where did you come by all of these actors cast in your movie?

When you start on a route it’s usually a bold decision. One day Angel Sallisaw stayed at our house, and suggested I try to get Lillo Brancato. That began the talks to get Lillo into my show. It was a long, drawn out experience from the filmmaker with no money trying to talk this X Hollywood star into being in my film. It was hard but Lillo reminded me of a half brother I have. Then through a friend I got Michael Alig, who I had never heard of. I went out to a bar and met him, and he looked too young to play the role. Michael Alig lead to Michael Musto. He is the biggest surprise in the film. He became the main act in the film. With these guys it was like dominoes, little by little they came. Do you wanna hear about Ron Jeremy?

Michael,  so you play the role of God, is that correct?

You mean in the movie, or in real life?

In real life I try. In the movie yes.

Have you ever been in a movie before?

Yes. I’ve  been in a lot of movies. “Family Possessions”, a horror film I was in, “Party Monster 2”, that’s coming out this year some time.

Do you think your experience as a “Club Kid” helped you in this role?

You know what, my experience as a “club kid” has helped me in everything I’ve done. Club life is really a microcosm of the world really, and a concentrated version of New York City. In New York you’re kind of celebrated for being outcasts, and clubland is that times 100. It teaches you people skills, you learn how to deal with people, how to deescalate situations, how to jockey for the preposition, you learn all of that in clubland.

So tell me your take on the movie. What did it feel like to be in this film?

It felt like we were revisiting history, because of the whole “Warriors”connection. “The Warriors” was one of my first connections to New York City, coming from Indiana. I saw “The Warriors” when I was a teenager in Indiana, and I thought “wow”! It makes the city look very wild, Wild West kind of. I thought it was “fucking scary”, but it also looked very exciting. I hope that we can give kids nowadays the same kind of feeling, but I don’t think we will because the city is so cleaned up now. It’s cool that this move is filmed in New York, it’s very old school that way. That’s really exciting. The city should subsidize stuff like this. They should be paying Eric.  Clubland was the place where it all started and the city should be nurturing it’s club scene, instead of suppressing it.

What role do you portray?

I play Tony. I was told by ERIC in the very beginning, to think of my character like Lily in The Monsters, the only normal one.

Is this similar to anything you’ve ever done before?

No, but I can say it’s similar to my second coming and how it parallels my road to redemption, and how he the character in the film tries to redeem himself after he rescues a little girl and brings her to the mom or who she thought was the mom.  For many years in his own mind he thought he was a hero. But then comes to find out by a vampire priest that it wasn’t in fact the mother, that he gave the little girl to witches. He was kind of scarred over that, and he’s trying to redeem himself, and he’s trying to do the right thing.

How was it working with the others?

I thought it was a great experience overall. It was really fun and we had a great time. We collaborated in a really productive and efficient way.

Did you have a favorite scene in the movie?

I got to say the stuff in the hospital is my favorite.

What’s the premise of the movie from your point of view?

My character worked in an amusement park and rescued a little girl, and they came to find out that, that wasn’t the mom. Eric’s character is the father. He decides to do some stuff that I find rather questionable towards the end, and I said that I didn’t want to join him, which is kind of like in my own life. There were still a lot of temptation to do bad things, but I’ve made a decision in my own life, and the character in the film, to not go  along.

So are you telling me that the character you portray is similar to yourself?

Not the character but the journey. For me the second time around after all that happened I’ve come to appreciate things much more, and Eric is a very talented guy. He didn’t really have the financial means to really show his potential. I think that what I’ve seen that he’s done with this film is great, and he has some imagination. He’s a really good storyteller and I think that sky is the limit for this guy. I think when he gets a little more financially set when he creates his vision, I think that he’s going to create magic.

Everyone says that you’re funny.

I’m doing comedy all around the country. I’m actually going to open up for “Fluffy”.

What type of part do you portray in the film?

I play a doctor type character. I play like a healer. It’s got a little heart. I think the dialogue was funny. It was fun.

I was on the film set and the director called action, and I pulled my pants down not knowing why….sorry the wrong movie. I’ve done 200 mainstream films, you probably saw some of them, Studio 54?

Yes I saw that.

I played the coat check guy. I also have the world record for most music videos.

Nobody is even close. We’re talking MTV, VH1, and youTube. The latest being LMFAO, “Sexy and I Know It”. I play really good piano, really good violin.

I’m already impressed with you. What made you agree to do Vamp Bikers?

On December 23rd there will be an encore performance of Vamp Bikers Tres at The Anthology Film Archives located at: 32 2nd Ave, New York City.