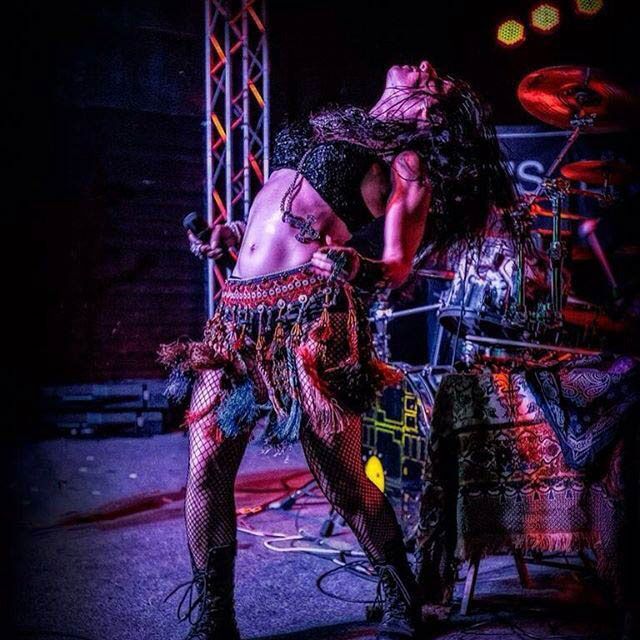 Coming off a 29 show co-headlining US tour,  gypsy metal group Vajra has just released their new single entitled, “Mirror”. Getting rave reviews from Huff Post, Rolling Stone, Loudwire, and many others, Vajra, grips the boundaries of the metal genre and tears it to pieces, with a vibrant and powerful excitement formally undiscovered. 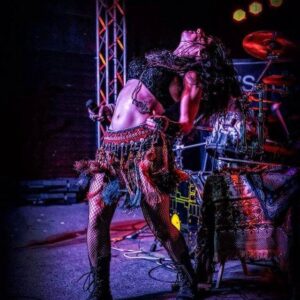 The lead singer Annamaria Pinna is a cross between Grace Slick, Stevie Nicks and Whitney Houston, only more relevant and more dramatic. The group is so mysterious that they don’t need a genre. The band’s sound is mesmerizing, hauntingly melodic, with an Eastern Indian touch of sophistication. The sound is like something out of a metal fantasy, filled with color and sparkle.

Having been awarded Best Rock 2017 from the Richmound International Film Festival, #1 of the Reverbnation Alternative Rock Music Chart for NYC for 10 consecutive weeks , the NYC based group has raised a buzz that can only end up as a household word.

Louder Than War spoke in depth with front woman Annamaria, the daughter of an ex Monk, who encouraged her to learn about the world, and this is her musical story.

Louder Than War: You guys are so awesome.

OMG thank you so much. Did you see the Huff Post thing that just came out? It was like with Tool and Ann Wilson of Heart on vocals….I was like, “Whhhaaaatttt”..

I was thinking more Gracie Slick.

I’ve heard that so many times. I love her.

I’ve listened to your music and I know that you are a metal band…but are you really?

I honestly never categorize my stuff. Whatever we are we are. That’s why were calling it gypsy metal. We don’t know what to call it. So we’re just running with that right now.

People like to listen to a certain kind of music, that’s how you get their attention. They like to identify with a type of genre. However I think you guys are so mysterious that I don’t even think you need one.

I want to know more about you.

I grew up in Poughkeepsie. My dad was a former Monk, and then he became a schoolteacher. He met my mom who is teaching. My dad is a really beautiful, spiritual, gentle soul. He’s connected to something else other than this material thing. We used to make fun of him because he doesn’t wear any jewelry, he buys his clothes at Kmart, he just doesn’t care, he says whatever. When we were younger we were caught up in materialistic crap. My mother was just the opposite. My dad was poor, he didn’t even have his own bedroom, he slept on the couch. My mom grew up in upstate New York, both are 100% Italian, but her father was in the trucking business. When she was 16 she had a diamond ring, things were done with a certain protocol, she had a coming out party, so it was like two different worlds collided. However they met on a spiritual, philosophical realm. They used to talk after classes, and he’s five years younger than her. She was gorgeous, and she still is gorgeous, and she traveled the world by herself, but he was enamored by her. A lot of men were, but he’s the one that caught her. There was something deeper that resonated with her. She felt safe with him.

Yeah. So then before that dad had left the church because he was helping the migrant farmers, helping their kids get education. The monastery people came down on him and told him that he was not yet ready to help people. That’s when things clicked in his head. He thought: when are you ready to help people? That’s when he decided to go and teach. He’s an amazing teacher, and is still teaching. He has a gift. So dad taught us the spiritual component. He told us that we didn’t need to go to church and that your God is wherever you are. So we grew up with that, and taught not to get caught up with the nonsense in the world. When you’re a kid you really don’t understand that. I was more caught up in the excitement of the world, the glitter, and the subcultures. It fascinated me. He told me that was cool but that I should center myself. I went to school as a Political Science major, but I always wanted to do music. I took dancing when I was three, tap, jazz and ballet.  I studied with Alvin Ailey when I was in college. I was touring on the East Coast with an Indian dance group. I graduated a few years early, so I had a couple of years to play with. So I got involved in the music business. I decided I was not really suited for that. My parents had this image of lawyer, Dr., but I wanted to perform. They asked me if I wanted to be a waitress for the rest of my life. I wasn’t self actualized enough, so I went to law school. I graduated school, I did really well, and I started working at a law firm. The first paycheck I had, I bought guitar lessons. I eventually left and I moved to India. When I was over there I did a little acting, a little modeling, but again I wanted to know what I was going to do with my life.

I had gone to India for a friend’s wedding. I felt like I was home. I didn’t get sick, I traveled by myself, and as a female that usually is not done. I knew it was a home of mine, I didn’t know why. I knew I’d be back but I didn’t know when, so a year later I came back. I needed to challenge myself. I felt that India was the place where I could dig a little deeper, for example,  why am I talking with my hands? They do things differently. There’s no personal space over there. If you look into someone’s eyes it’s a certain thing. They have different ways of communicating, they have different ways to just be. There are different focuses on life. There’s a material space and then there’s a spiritual space. There’s a different realm. It was cool because it pulled me out of the way I behaved and the way I existed. It forced me to observe my behavior. It was just an examining of the self. It was tough, it wasn’t easy living over there. I was considered a foreigner over there. All of my education and everything that I was, was irrelevant over there. It was how I existed and was in that moment. That’s who I was. So I was a different person. It was a great experience for me. So I thought that if I was on my death bed what is it that I would have regretted not doing? Again it came down to the music. So I came back to the US. So that it, and here we are.

When did you realize that you were put on this Earth to sing?

I knew that since I was really little. I was a toddler. I used to put on performances in front of my family. Duran Duran was my first favorite band. I remember seeing the touring video. “Tiger Tiger” was the song and I was so thrilled by that. I don’t know why I was so thrilled by it, but I was. Then it was Michael Jackson and Prince, and I would do all the dances. They were my heroes, I just wanted to be them. I don’t know why that appealed to me so much because music was not a part of my growing up. My parents didn’t play music, they didn’t play instruments but they also they really didn’t play music. The only time I really heard music was in the car, when my dad played it. My mom really never played it. She thinks it’s noise. My dad listened to Motown, so I liked a lot of Motown stuff. So that’s my background. It’s comfortable for me, although the singing still is very stressful for me. I never had performance anxiety when I was younger, but now as an adult I do have performance anxiety. It is a constant battle to sit on the stage and just do my thing. It took me a while to learn how to do that. It took me up until last year probably to really sit in that space and be comfortable sitting in that space, and move the energy around me, so that everyone can sit in that space as well. If we aren’t sitting in that space no one else is going to be sitting in that space. Not every performance is as connected as it should be, but we as a group strive for that.

If you could perform anywhere in the world, where would you want it to be?

I’ve always said Madison Square Garden sold out. It’s got to be three nights in a row.

If we can get to the point when we can do that, that would just be sick. I had a producer come over to me and ask me what we were doing, if we were trying to do something commercial or trying to do our own thing. He said “if you are trying to do something commercial you have to kind of get with what’s happening”. I looked at him, and told him we were doing our own thing, and it’s going to be commercial. It is commercial just like Pink Floyd, Led Zeppelin, and Black Sabbath. He said well it was a different time. I said that’s what people said back then.

Is there anything else that you would love to promote for yourselves?

We are releasing the first EP in a set of three related EP’s called the trilogy series. Each EP will have three songs and three interludes and maybe a bonus track. Each EP will be released on an auspicious day which is a derivative of three and the cost will be a derivative of three. Also, each EP will have a focus on one of the primary colors. Each piece of music will have a video component, and after the release of the EP we will combine all of the video footage and all of the music into a movie, which will be released separately. The first EP is called Irkalla. “The Mirror” is the first release from Irkalla. The single art is a puzzle piece of the full EP art. Irkalla is the Sumerian word for the underworld.