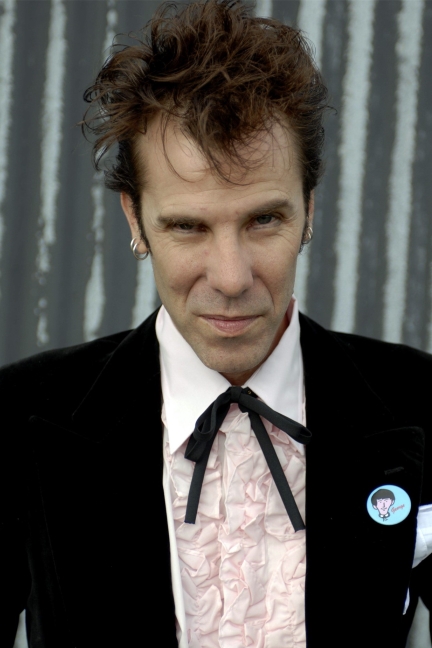 A positively written, full circle, and enlightening chronicle of the life and times of ” Stray Cats drummer Slim Jim Phantom, is set to be unleashed upon the world on August 16th, via Saint Martins Press.

Having just come off of the “Rewind”, a huge festival in the UK, Phantom can now celebrate the success of his totally self written autobiography. Uniquely expressed in his journey, is the story of his wacky, yet normal life.

Louder than war was able to speak with Slim Jim about his book, its contents and some of his childhood experiences….

Louder than War: Your new autobiography is about to be unleashed…

On August 16th, on Saint Martins press, which is a nice publishing house, it’s called “A Stray Cat Struts”. It’s kind of an account of my wacky life. It’s PG13, it’s all very nice. There is certainly enough sex, drugs, and rock’ roll in there, but it’s a bigger picture than that. A lot of it is just that I had a normal life amongst the craziness. My son, he’s now 26, but he lives with me, we lived on the Sunset Strip, I had a night club, but we had a normal life at the same time. When I was on the road, there was an underlying story to it, and there’s a whole lot of cool stuff in there about, friendships I had with Lemmy, RIP, George Harrison, and Johnny Ramone all my best buddies. There’s nice kind of positive stories about everybody. I decided when I did it, to make it nice. We’re not talking about 4 strippers, 5 needles, there’s other guys who have done more if that, and that’s all they have to talk about.

That might be Billy Idol’s book, which was also amazing.

He’s like an old buddy. His kid and my kid went to school together. I kind of tried to concentrate on the other side, as not as many people do. It has a little bit of a twist on it, and I wrote it all myself. I didn’t tell someone stories and have them transcribe them, that’s a couple of things I insisted on. My son’s mother, Brit Eckland, I wanted to tell that normality more than …..we had a kind of jet set life, but it was always kind of normal as well as it was wacky. I tell a deeper side of it. Always it comes back to 3 guys in Massapequa that were totally grateful for the whole thing. The  guys were hanging out at the drum stores, and playing bars, now we’re hanging out with The Beatles. It’s always a great-full story.

It’s easy to read, it has a couple of different sides in there, and it’s like everybody that we know, but it’s a different side of it. Like Lemmy was one of my dear friends, but I don’t talk about doing drugs with Lemmy. We talk about our love of Buddy Holly together, in the car and playing the radio. There’s a dark side, everyone’s done it….but it’s kind of the more played out side of it.

Yeah, I agree. Everyone knows that…

Yeah, tell us something we don’t know.

And you wrote it all yourself, that’s very cool.

Yeah, I payed attention in English class in High School.

Is your son musical?

Yeah, he’s a really good drummer. He played in a band with Idol’s kid, like Brian and me when they were little. It’s funny.

So when you were in Massapequa, going to drum shops and feeding the ducks in the parks, who did you listen to on the radio?

I was very young and learning how to play the drums, I really liked anything that was on the radio. When I was 16, maybe 17, we discovered rockabilly music. It was like a bolt of lightening. You didn’t know that, that existed. We knew who Elvis Presley was, a famous guy and all that….we didn’t know that Elvis  started in the 50’s. That kind of led to Eddie Cochran, Buddy Holly, and Jerry Lee Lewis, and our lives became taken over by it. For me, a hundred percent. Then I started to play. Lee and I played a lot when we were kids. I was very much into the blues. I remember it was a couple of stops on the train, an old jazz guy, Moussie Alexander, who played with Benny Goodman,  I listened to a lot of that. We all studied and had lessons, and then it was up to us to get your own style going…That’s the underlying thing of my whole book, we all happened to go to school together. It was just a weird thing. These guys are next to you in school everyday. Brian was a couple of years older than us, Lee and I were in the same class, but we knew BRIAN since we were kids. We were in Little League together, Boy Scouts, that kind of stuff. Who would have known that 100 years later we would be in a band that made a pretty good dent in pop culture…it’s all a big positive story.