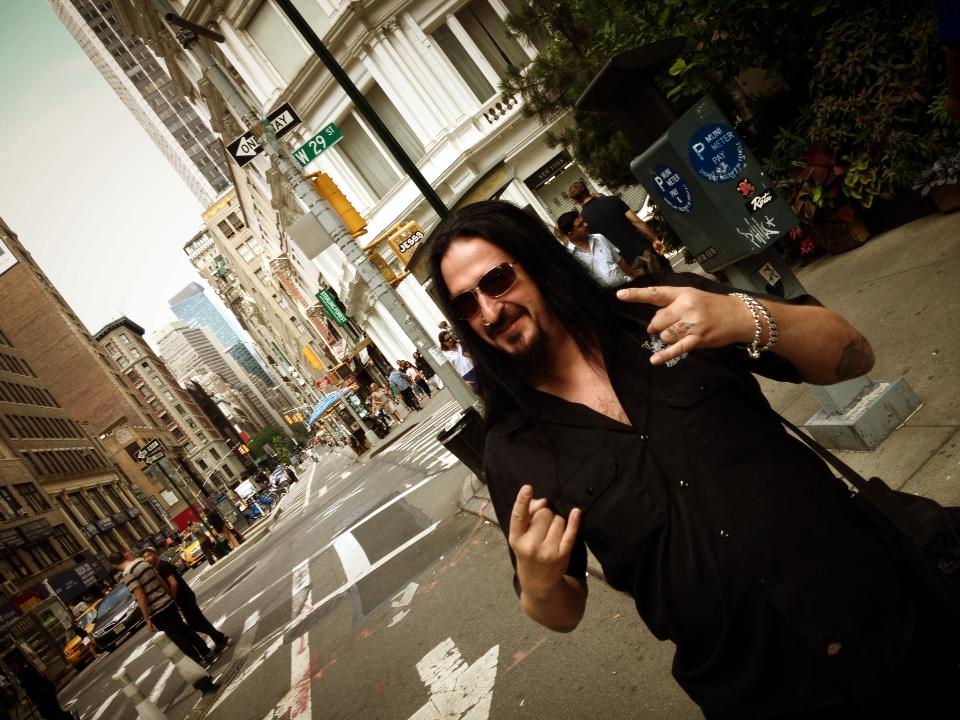 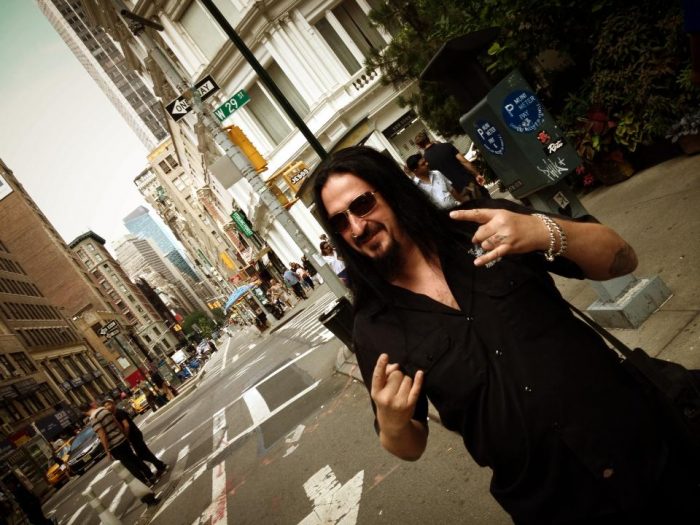 Amidst the most dangerous mosh pit spontaneously formed outside the auditorium where fanatic’s are frantically hoping to gain access to the fresh air outside the venue,  in a crowded corner, stands one of the most important aspects of the concert …..”The Merchandise Counter”. The fans last chance to secure a souvenir of their adored  “Rocker”, in the form of a poster, tee shirt, phone case, button, any trinket to have and to hold as a happy remembrance of the experience.

One of the busiest men on the other side of the “merch” counter, whom I first met at an Adam Ant record signing in Liverpool, Roy Jenkins, and his own company “Noise Merchandise”, was kind enough to spend some time speaking to Louder Than War, about how the world of promotional commodities evolves. Everyone longs to take an object relating to their idol home with them, something to keep close to your heart, or wear proudly on your body. Roy Jenkins controls one of the tightest, most professional concessions just for that purpose.

Louder Than War: So Roy, is this your own business?

Yes. Me and another guy called Rodger, we use to be in a band years and years ago. Then we left the band and in 1989 we set up a management company, and managed a few bands, then we set them up with the merch company. We did everything for them. They ended up sacking us, and we carried on with the merch. At that point I was having kids, so I managed kids instead of bands, and that’s how I ended up doing this.

How do you connect with your clients?

I did cold calling. What had happened was obviously I’ve been in this business so long, I’ve done all the different things, been in a band, I was a tour manager, so I was lucky. A lot of people that I was involved in when I was in a band, I’ve worked with for a long time. So, it was word of mouth. I like tattoos for example, so I went to the tattoo conventions and wound up getting “Hell’s Angels”. It’s kind of a branding thing.

Are you the one that decides what goes on the tee shirts, for example?

I like to work with the artists. For instance, like Adam Ant, a lot  of the artists I deal with are kind of particular about the designs of the merch. They’ll come with an idea to me. They’ll say “this is the tour we’re doing, what do you think”? For example with Adam, a lot of the stuff is all his ideas. Some bands just say “this is what I want”, and they give it to me.

How many bands do you sell merchandise for?

Oh god, that’s a good question….I do artists like Big Country, The Alarm, Adam Ant, ….Killing Joke, …..I couldn’t even begin to say…

Do the artist receive royalties?

Oh yeah…I’m set up completely like that. It’s random, but a lot of bands I set up the company for them and they employ me. Every company is different. I go on tour with only 3 or 4 bands now, like Adam Ant. I use to tour a lot. I’ve been touring with bands a lot. I run the company but I don’t go on tour as much. It’s kind of weird, every band is different. So it’s merchandise now, but when I started in this business we were selling records and giving away tee shirts. Now it’s the other way around, but I’ll be dead by the time you can download a tee shirt. So that’s a big difference.

To me I think everyone that goes to a concert, especially one like Adam Ant, needs to purchase something that reminds them of the artist. So what do you do with the people that are standing outside like in Brixton for example, since Adam Ant is my only point of reference, and selling tee shirts for £5?

What we do in our days is we ignore it. The best one I ever saw, I think it was “Public Enemy”. There were these massive men, I think they showed up from New York. They turned up at “Town and Country” there, and were selling their shirts outside. They were big, massive, scary looking blokes. There was a 5th one that went out behind them. Do you know what he did?

He grabbed a fire extinguisher and he went out and sprayed all their tee shirts. No violence. At Brixton I actually went out to say goodbye to my daughter, and the bloke said to me,”Do you want to buy a tee shirt”? The tee shirts are rubbish. The dedicated people that I work with, they put a lot of work in the shirts…if you ever looked at Adam’s tee shirts,  there is a lot of work gone into that. There’s front print, back print, a bit on the side. That takes a lot of his work.  If you’re a guy that has a bit of a belly, what they’ve done is added a little extra to the bottom. I think fans appreciate that. It’s the same thing when you go on line and see people selling tee shirts. I have to prove to them that I have the rights to the tee shirt.

That has to be annoying.

It’s really annoying. You can’t buy the experience that we have.

Well you look like you have fun selling as well.

I actually love it. When I’m asked the same question 24 thousand times, “do you have that in black”, when it’s an all white tee shirt, or “how much are your tee shirts”….the funniest is when I go across the pond…the Adam Ant tee shirt has the cross on his hand. Everybody knows that’s tape. I sold that shirt in England for about 2 years and then I went to America. Everybody asked me there, ” have you got that tee shirt in any other size than XL”? I was just standing there with my mouth open….My other favorite is when they turn up and say, “are you going to be here after the show”? My reply is, “Why do you want a date, if it’s a bloke or ‘no I’m going to leave when it’s really my busiest time”. I get asked the same questions every single night.

I think I might be guilty of asking you some of those questions myself.

We enjoy all that, all the fans. Everyone is really nice. They bring us a beer, ask if they can help…they’re really nice.

How much interaction do you have with the artists after or before the actual performance?

A lot of the time I travel with the band. Sometimes when there’s not much going on, then I’ll drive the band. I’ve done everything. It depends.  A big tour like Adam just had, you never see him. I try and make it beneficial for the artist and the band so that’s it’s cost effective.  I hire sellers all over the place. We hire someone that can sell well, someone that knows the merchandise, and not the singer. If they know the singer, you put them in the bus and they tell the singer, ” you know I can play the drums”…..that happens you know. If you know your position, you get treated better. I might need 20 people to do an event.

So what’s a normal day like for you on let’s say, an Adam Ant concert day?

I’m working all day, so I’m at the building probably at 8, 9, 10 o’clock. I set up pretty quick, and count the merch, because I have to account for everything. When the gig is finished everyone thinks I go home, but I have to  count  up everything. I have to tidy it all up.

So will you be at the “Kings of the Wild Frontier” concert on December 18th?

I will. We’re organizing that now. I have another show two days before for a band called the “Fields of The Nephilim”. If your in town, come see that.

So do you have any plans of touring the US with anyone?

I don’t know. It’s kind of hard for me, because of the kids and school.

How old are your kids?

I’ve got a 15 year old boy called JRoc and I’ve got an 11 year old girl called Summer Strummer. The year before we went and drove up to San Francisco, and all the way down the Coast and ended Up in Vegas. I love Vegas.

So you’re the king of Merchandise?

In my house I am.

Make sure before you leave your next concert to stop by the merch counter.. For more information: