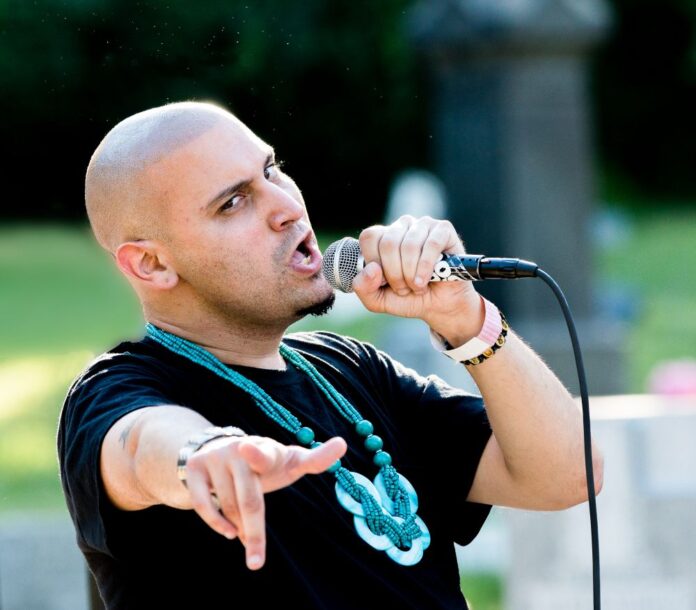 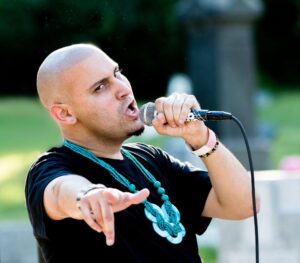 Lovari Lovari is an enthusiastic, high spirited pop/R&B/dance song writer and singer, a message that his newly released album I Wanna Be Loved, colourfully endorses. With his tattooed hair and tough guy look this genuinely gentle soul mixes it up, exploring several different genres all at once and comes out with some really good stuff as well as some funny stories. Lovari has been in the music industry for some time, producing, writing and promoting. His newest release contains four new songs and the most interesting collaborations imaginable. Eileen Shapiro caught up with him for a chat about free style, collaboration and using a block of wood as a microphone.

Louder Than War: So you recently put out a bunch of new material, including a new album. What is going on with that?

Lovari Lovari: I have 4 new songs because it’s a remix album.  I put two new videos out at once, Right Here and The Floor.

What about Touch Me featuring Robin Byrd?

Is that on the album as well?

Yes. It’s a remix album so I just went ahead and put in three new songs at once.

I Wanna Be Loved.

Awww – and it is already released?

Yes. It was released in June.

Lovari, give me some background information on yourself and how you got into the world of entertainment.

I was born and raised in Queens. Literally I used to sing when I was 3 years old. My mom used to put tape recorders, you know like those cassettes around, and she used to record me, because she used to say, “I think you’re going to be a singer.” There were three songs that I loved to sing over and over again. They were Macho Man by The Village People, Randy Jones knows that story (The Cowboy). I used a block of wood as a microphone. I wasn’t poor, but for some reason I literally used this block of wood, don’t ask me why. I would sing Bad Girl by Donna Summer and On the Radio by Donna Summer and the Bee Gees, but I don’t remember which song.  Maybe that’s why I sing in such a high voice.

How long have you been in this music scene, because I know you also act and produce as well.

Only the free style community knows this, but I had a free style single out in the early 2000’s called These Tears.  That was my first incarnation, as a free style singer.  The song did really well. They still play it on all the free style radio stations. When I do my ITunes sales, These Tears is always in my top 5.  The thing is I love free style, but I never intended to do just free style music.  So I took a break for a few years, just to work and stuff like that, and then I thought about what I wanted to do, in regards to a music genre. I love 90s dance music, but I also like R&B, so I did a medium. My first full, real album came out in 2009. That was called The Statement.  I put a lot of New York personality into that album, for example comedian and writer for Play Girl Magazine, Robbyn Kamille.  My lead single called All I Want Is You reached number one in Portland, Oregon on Hot 96, a dance station.

Do you have a favorite song on your new album?

You know I love The Floor. It’s my most polished video. So my next single called Work It Out actually got produced as a TV theme song for Under The Pink Carpet, which was a series on PBS, every week when the show was broadcast you would hear it . My follow up album was called No Holding Back. The lead single from that was a remix of Debbie Gibson’s song Foolish Beat. That worked in my favour because the gossip guy Perez Hilton actually trashed the song.

It was ok because here I was this tri state area singer and all of a sudden I’m getting written about by Perez Hilton. So for 5 seconds I was mortified then I made it work in my favor. So people started googling me and even though half of them said, “Oh he can’t sing”, people were still looking at me on gGoogle and I didn’t even have to do anything.  It was R&B, Hip Hop it was a dark album because I was going through a lot at that time.

Everybody deserves at least one dark album.

I’m sure there will be others. I write all of my own songs with the exception of the remix. But I had a guy from Long Island, an underground rapper and hip hop artist asked to write me a song. So I gave him a beat produced by J. Staffz who worked with G-Unit and Khalifa and he wrote me a track and brought it into a studio with a singer named Anny Jules. She was actually in The Lion King on Broadway. We wound up turning it into a duet, and it got over a million views on Vevo, and made the first round nominations for the Grammys, R&B category. It went to number one on the ITunes and Amazon R&B chart. The follow up to Still In Love was a song with Robey called Friday The 13th.  She was in the TV show Friday The 13th and she did a song with me called Take It To The To”, and that was the next single, so I wound up getting a bunch of horror fan based people.

Currently, where do you see your music going, in what direction?

I’m going to use more of my voice. I want to be more vocal on my next album. I want to showcase my vocals more. I can never say what the next project is going to be until it happens, but I’ve been toying with the thought of bringing it back to vocals. The industry doesn’t have any more vocals, it’s very computerized. Even the R&B. I think it’s very computerized. I want to bring it back to the early Mariah Carey, the early Whitney Houston.

So now that we’re back in the present, tell us a little about your remix album that released in June.