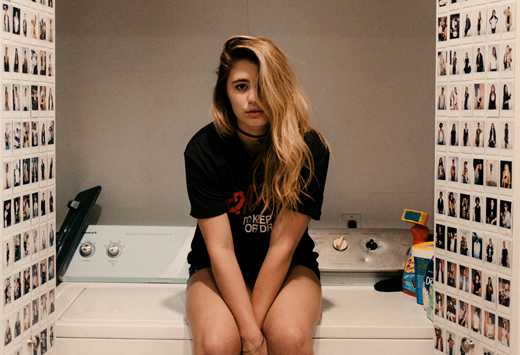 The 19 year old YouTube sensation was named one of the Top 100 You Tubers in the world, as well as being an accomplished actress, having appeared in the DreamWorks Animation “Expelled”, the lead in the film, “Terry the Tomboy”, “American Wrestler: The Wizard”, the TV series, “T@gged”, and “The Thinning”.

Johnson spoke of her inspiration for the song “DNA” her future aspirations, her acting career, and her personal life….

Louder Than War: I am in love with DNA, what was your inspiration for the song?

That video is so powerful.

Thank you, that means so much to me.

I was really young. I realized that I loved to sing when I was seven or eight. Super early on in life.

Who were your musical influences?

Growing up I listened to a lot of classic rock. I didn’t really listen to a lot of pop music growing up. My influences aren’t really mainstream artists, but now they are, talent like: Weekend, and Frank Ocean, they were my favorites in the middle of High School.

You’re also an actress? How do you balance the two, you must be really busy?

It’s a busy schedule, but I make it work. I still have time for my friends, and having fun, and being a teenager. It’s hard for me to find time during the day to work out and run errands, that’s very difficult. But I have a great team, great people around me. I’m not busy 24/7, I have time to breathe sometimes.

I can tell you love what you’re doing though.

I love life. I enjoy life so much, I’m so happy right now.

If you had to choose between singing or acting, which would you favor?

Oh my God, people have been asking me that ever since I was younger. I guess I would be a singer for a couple of different reasons. Mainly because I could still act. I could do a music video where I am acting in it, because I never want to stop doing both. I love them both so much. But right now my main focus is working on an album.

I would just say thank you and this wouldn’t be possible without all of them. About the people supporting me for so long, it’s just one of the best feelings. When I go on social media I don’t really look at people that are following me, as like followers or fans. It’s a very confusing thing for me to still grasp, even at this point in my life. It’s such a weird thing for me. I don’t want them to be like a fan, they are like a friend because they’ve been there so long. It’s such a weird thing for me to understand, a fan base, but I am so grateful for the opportunity.

If you could trade places with anybody at all for one day, who would it be?

I would want to spend the day as Marilyn Monroe. That would be incredible. She had it rough, I would just like to understand what was going through her head.

So you are a new addition to a Crayon box, what color are you?

If you were a superhero what would you want your power to be?

I’ve always wanted to fly, but also I’m torn between that and teleportation. Then I could do whatever I want, for example there wouldn’t be any going through traffic, actually yeah, I would totally teleport.

In 10 years I will be almost 30. Omg that’s so scary to think about…. I would hope to still be making music, and performing, and still acting, and hopefully I would have calmed down a little bit. My life is a little crazy, I don’t wanted to be like this for the next 10 years. I definitely won’t have kids, I definitely will not be married. That sounds like a good life, living in a beautiful home, traveling, that sounds awesome.

Do you plan on touring in support of DNA?

I probably won’t be touring until album comes out.

Do you have a name for the album?

I wish I did. I’m still trying to figure it out. I’m just waiting for it to come to me. I just think one day someone’s going to say something, or I’m going to think of something, and the album title…that’s it!

Take a peek at her latest video https://smarturl.it/LMJDNAvidYT