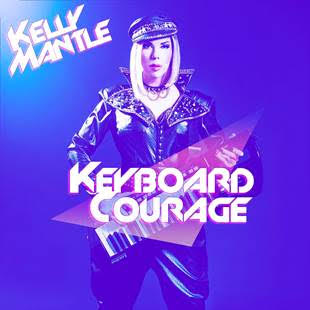 Talented and serious musician Kelly mantle, a contestant on season 6 of RuPaul’s Drag Race is soon to release her new electronic dream pop, anti-cyberbullying theme song of encouragement, entitled “Keyboard Courage”, followed by a tour in the UK in January.

Kelly plays each and every instrument on the track which will be followed by a video, as well as her fourth album coming in February entitled thus far, “Duality”.

Besides being a musically enriched drag queen, Kelly is also a serious actress/ after having appeared on television a bunch of times including shows such as CSI, Will and Grace, NYPD and Nip Tuck just to mention a few. She has also appeared in theatre productions as well as being featured in films such as “Confessions of a Womaniser” with Gary Busey.

Known also as a member of “Tranzkuntinental”, a band which included drag sisters William and Detox, she has gone solo with a vengeance. If that weren’t enough, Kelly Mantle is also the nephew of the baseball Yankee legend, Mickey Mantle.

Louder than war: The words to the song, “Keyboard Courage”, are very powerful. What exactly is the motivation behind the song?

I’m a singer and songwriter first, 4 years before drag race ever came around. It was interesting that since my appearance on RuPaul, I have so many fans, a lot of them high school or even junior high school message me or approach me during the show and tell me that they are victims of cyberbullying which is online bullying. Kids have told me that it can make them feel suicidal, so I thought let me write a song that would be like an Anthem, just not to get discouraged by Keyboard Courage.

It’s very inspirational and fun at the same time.

That’s so cool to hear that. I consider myself a lyricist first. For me the reason I write music is because I love the rhythm of words. That’s really where my passion lies and I just layer that with music.

You play every instrument on the track, correct?

Yeah, I do. I play keys, guitar and I recently started playing drums. I’m excited that there are actually clips of me on the video playing the drums.

With all the touring and shows and films that you do, how do you find the time to learn an instrument?

That’s what keeps my sanity. After being on the road and touring I love to just come home and sit with my instruments. That is where I find my peace and tranquillity.

Which do you prefer, working in or out of drag?

I don’t have a preference. It’s a hell of a lot easier doing it out of drag. I consider myself to be a true spirited individual, a Native American actually, from Oklahoma. My whole life I’ve travelled back and forth between genders.

And the first time you put on a dress was?

I remember dressing up in my grandma’s nightgowns, all the time when I would stay the night. I would play pageant or dress up when I was about 5 or 6.

It must have been odd having Mickey Mantle, Yankee baseball legend as an uncle?

It’s funny but I was not born yet when he played baseball, he was already retired. To me he was just Uncle Mickey. I used to spend summers with him, his kids and his wife. I knew there was something special about him because any time he would go somewhere there would be a swarm of people asking for his autograph the day after he died I went into a convenience store and saw his picture on the cover of every newspaper and magazine and I realized he was a legend.

You were in a musical group with Detox and William, how did that go?

Well, it was interesting. In the beginning it was fun. Listen, I love performing. I love performing rock and roll, and we did covers such as Joan Jett, but there were a lot of personalities included. Put five or six drag queens together… It can get a little shaky!

When are you releasing your new single?

You know I might be making my first London appearance.

Tell me all about that.

I spoke with my manager last night and it looks like it’s going to be happening in January or February. We are locking down the dates now for sure. I’m so excited.

Just remember, they start partying at 3 o’clock in the afternoon, unlike us. You don’t even go get dressed to go out until 11 p.m.

Exactly. So the new single is coming out…

Around November 16th or 17th. The album, which is my 4th album is coming out in February.

Do we have a name for the new album?

That’s a perfect name for you.

I think so, I think so… Its fluid I guess.

What can we expect musically from this album?

Listen to Kelly’s single Eliminated here. Kelly can be found online and on twitter.