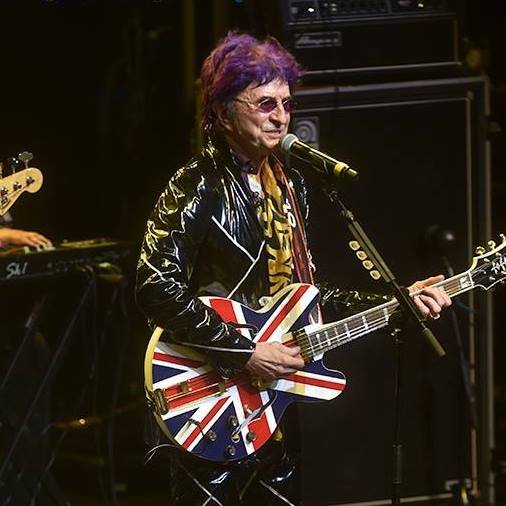 Illustrious and iconic song writer, performer and producer, Jim Peterik, known as a member of the band “Survivor”, (Eye of the Tiger), and “The Ides of March”, (Vehicle), has just released “The Song”. “The Song” is a collection of Peterik’s composition classics, taken from the last four decades of his song writing, and performed with an enchanting and sexy new interpretation.

Also released is “We All Bleed”, an anthem inspired by the tragic and senseless Orlando shootings which shook the world, as does the song.

Besides “The Eye of the Tiger”, from the film Rocky lll, and “Burning Heart” from the Rocky lV movie, his other phenomenal hits include: “High on You”, “Can’t Hold Back”, “The Search is Over”, and I can continue for days. I was honored to be able to ask Jim questions about the new release, as well as the music world in general.

Louder Than War: You have written so many epic songs through the years, what music
were you influenced by while you were growing up?

I was always a fan of great songwriting- though  I  had no idea who the writers were when  I  was a child-  I  just knew  I  was in love with the Everly Brothers music, Johnny Cash, Elvis Presley and then later anything by the three “B”S- Bacharach, (Dionne Warwick), the Beach boys and of course the Beatles.  Later on I discovered the geniuses behind these great songs- they had the power to move mountains- and me.

What inspired you to release “The songs”?

I was intrigued by going under the hood to see what made my biggest hits tick.  Was it the arrangements, the delivery or the words and music themselves?  When I  stripped these songs down to their raw essence  I  came to believe that a genuine song can be moving in almost any valid style- caught up in you (38 special) as an Eleanor Rigby style chamber orchestra arrangement, vehicle as a spooky “Riders on the storm” blues and most notably eye of the tiger as a moody bluegrass with fiddle, banjo and upright bass.

Do you feel as though writing songs was a path that was chosen for
you before you were born?

I believe it was there in the blueprint of who I am from the very start. Early on I found I could make up songs. I heard melodies in the air and words seemed to magically appear in the margins of all my school notebooks.  It is one area of my life that I am totally committed to.  I always feel my best song is still to be written.

I’m sure you live every single song that you’ve have created,
However is there a song that you are particularly proud of, one you
Enjoy performing the most?

Probably “The search is over”.  This song which I  co- wrote for survivor in 1984 has resonated in my life and changed shapes many times. It’s so easy to take for granted what is too easily obtained and overlook the obvious path. Perhaps the search is never really over.

Being in a group like Survivor you must have had amazing
Experiences. From your autobiography, what is one of the highlights of
your career?

There are so many amazing moments. But sometimes it’s the simplest thing that stands out. Of course survivor went to the big red carpet premiere of Rocky lll just before the single came out. There was the usual fanfare and flash bulbs (!) going off and a jaded, uptight industry audience politely watched and clapped in synch. But it wasn’t until I sneaked into my local theater in Lagrange, Illinois the week that the movie came out, sat in the back row incognito and saw the people start cheering and going nuts to the first telegraphic guitar lick that  I  played that  I  truly saw the future of this song- the impact it would ultimately have on the world.

Will you be touring in support of “The songs”?

Yes! I have done five sold out shows so far with more on the way. I love the intimate atmosphere of  venues such as the city winery (in Chicago, Nashville, Atlanta and New York City) and the acorn theater in Three Oaks, Michigan, where  I  can tell the stories behind the songs and feature my acoustic band of Chicago musicians on fiddle, upright bass, pedal steel, banjo, piano and acoustic guitar. Having my son Colin Peterik on piano and backing vocals is a really special treat for me.

“We all bleed red”, is an amazing song, with one of the most powerful messages I ‘ve heard yet relating to the senseless Orlando tragedy. Where and how can fans purchase it? How did the Orlando shootings affect you personally?

Thank you! I was moved and shaken just like everyone else in the aftermath of the Orlando shootings- but the song is also a reaction to terrorism in general- how religious beliefs and prejudice can go against the very essence of what it means to be human- living on this earth together. The song and lyric video is on YouTube now and the song itself can be purchased on  I -tunes. We are working out a way to turn over any proceeds to the proper charity.

Do you think the music industry has changed for the better in a “Twitter” world, or would you rather it have stayed the same through the years?

I think it’s a two edged sword. It’s easier now for a band or artist to self- promote if they are savvy with internet skills and have a flair for marketing. It also empowers the artist and puts his future squarely in his own hands. If they fail, they can no longer blame the record company or management. On the other hand, it is harder to make a buck selling your music because the perception now seems to be that music is free for the taking.  It has been devalued to some extent. Then again this new world order certainly weeds out the real deal artists from the wannabe’s and poseurs.

If you could give the younger Jim some advice, what would it be?

I would have counseled myself to stand up for myself and keep more control over what I  really wanted with my band Survivor.  Even though we were blessed with two great singers- first Dave Bickler- then the late great Jimi Jamison, in my original template for the band was to be kind of a second lead singer and second guitarist. That gradually changed as I  became the keyboardist and background vocalist. Fortunately I  could always express my heart through the catalogue of songs  I  wrote or co- wrote. That kept me sane.

Are there any future projects in the works for you?

The Ides of March, my band of 53 years (and still going strong) just released “Outside the box” a collection of the original masters of our biggest hits, including our the previously hard to find “La goodbye” and our 1970 number one, “Vehicle” and four brand new, brass driven rockers including our new single “Music messenger”.  In January frontiers records in Napoli, Italy will be releasing the new cd called “Fearless” by my band “Pride of lions” featuring the vocals of the incredible Toby Hitchcock and yours truly. This will be our sixth release since our debut in 2003. We have established ourselves in Europe and Japan and will hopefully with this release conquer America as well. Our sound is powerful and melodic at the same time.

I feel extremely fortunate to still be doing what I love. My greatest joy is hearing from people who have been affected positively by a song I  have written. That’s really what keeps me going and makes my strive to keep raising the bar on human connection. You can’t chart a goosebump- that either happens when listening to a song- or not. This blush of emotion is always what  I  strive for.

On top of the “The Songs” album, Jim has just released “We All Bleed Red”, a track inspired by 2016 Orlando Nightclub shooting. Share the track here: