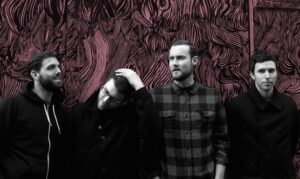 West Coast, fun in the sun, garage surf passionate, punk rock spirited, 1960s brought up to 2015, that’s Jet Trash. They’ve just released their first EP, entitled Jet Trash, which features their rock anthem single What They Want which is making waves all the way up the Pacific Coast.

The DIY surf cultured band is composed of, Paul Kemp (rhythm guitar and lead vocals), Keith Shughrou (lead guitar), Robby Justesen (drums) and Marshall Fassino (bass and lead vocals). Along with producer Andy Freeman, Jet Trash manage to create a classic, yet relevant sound using vintage gear combined with modern recording techniques. Using tube amps, 2 guitars, a bass and a drum, the group’s modernistic yet simple approach to their unique sound is reminiscent of the music of their predecessors, The Sonics and The Ventures. Currently they’re working on a full length album, which will undoubtedly be supported by a tour.

I was able to have a conversation with bassist and co-lead vocalist Marshall Fassino about the band’s creation, their music as well as their future projects.

Louder Than War: Who thought of the name Jet Trash?

Marshall Fassino: We actually collectively decided on it. It’s actually a lyric from a song by Tom Waits called Wild Years,I think. In it he refers to a lady that Frank is married to, I believe the exact words are “His wife was a spent piece of used jet trash.” We were like “boy that’s a harsh thing to call somebody”, but it also makes a great band name. We did have a few interesting theories about where it came from. One guy thought we got it from the New York Dolls because they had a song called Trash. We all like the New York Dolls, and that would’ve been a good place to get it from as well.

I wouldn’t call it a philosophy, but I guess “less is more” would be our philosophy. We usually try to wear all black when we’re on stage so that were not up there upstaging the music. We like songs to be tight, don’t overstay their welcome type songs. I think our arrangements speak for that too. You can only do so much with guitars, bass and drums. So I think we try to utilise the space as well as we can, by again, less is more. We don’t want to overstay our welcome. We do short sets and keep the people wanting more. We try to have a good time and like you said, marry a lot of influences. Obviously there’s a surf rock thing, garage rock, punk, so I think finding the middle ground between all of those various places and then presenting it in a nice tight package that people can dance to and have fun with, they don’t have to think too hard about anything, I think that’s probably our general philosophy. Less is more.

Your music is definitely fun and it’s definitely cool and to me it’s almost over the top, yet not at all. I have to wonder where this kind of sound is coming from now?

Yeah. It was our first time making the studio recording, with this material. So there are elements of studio traits that we did that give it that very flushed out feeling. There’s that punk Blood Moon, and we give it those hoots and howls at the end of it. It’s the little production studio things that kind of fill it out. It’s supposed to be just the music itself, very simple and very straightforward. I think we did a good job of marrying those two, our rough and tumble and stripped out live element in the studio, and the little bit of stuff to play with and to give it more of that filled out feeling. But again, the less is more thing is what I think we were shooting for.

A little over two years. Paul and I share the vocal duties, but he does the bulk of the work, probably about 80% to 90% of the material. Paul and I met, we were both working at Whole Foods in San Francisco. He mentioned that he had a band that he was putting together and I had a project I was doing at the time so I decided just to come in and play in my spare time. I think literally the first time we all met was at the first rehearsal that we had. The drummer Rob, Paul had played with in a previous band. And then Keith our lead guitar player met Paul at a barbecue. So he had met all of us separately and sort of brought us altogether. That was kind of how it all kicked off. We played for two years but literally hadn’t met each other until we all showed up for a first song together.

Do you plan on touring to support the EP, anywhere else besides California?

We haven’t gotten our first West Coast tour under our belt yet. We are actually planning one for the beginning of December. We just put the EP out, but unfortunately these things come and go quickly so we’re already starting to wind down as far as the promotion goes, but we are rapidly gearing up and figuring out a plan for a proper full length album. So there are a few things we didn’t do this time around like have a full national tour when we released this EP. So this time around we are going to have hopefully a tour that extends a little further than the West Coast. Where exactly we haven’t really decided, I mean we’ve got connections in the Midwest. I am actually from Wisconsin and I have friends that do music in the Midwest, so we might be branching out in that direction first. Eventually will get to the East Coast.

We’re hoping to get a label with a bit of distribution behind it. It’s definitely our plan to tour outside the west coast as soon as we have our album out.  We definitely did most if not everything for this release pretty much ourselves, the first time around. We got lucky in that the producer had a friend in the publicity world to help us. We managed to land a publishing deal. It was a chance to make a little bit of money from this but we wrote and we recorded this stuff by ourselves. We made CDs to sell at our shows,  and we did that all by ourselves. Considering that most of this first time around was DIY we made some pretty good headway, and are hoping obviously to improve on that with our first LP. You think that you just start a band and put out a record, people hear about it and they like it, and that’s how you get noticed, but it’s a lot of work. It is most definitely 1000 more steps than that. I think that a lot of us were uninitiated this first time around and now have a better idea of what is going on for the next one. Hopefully will improve on all levels of what we are doing.

Thanks for your time. Great EP and single and we’ll be keeping an eye out for the album!