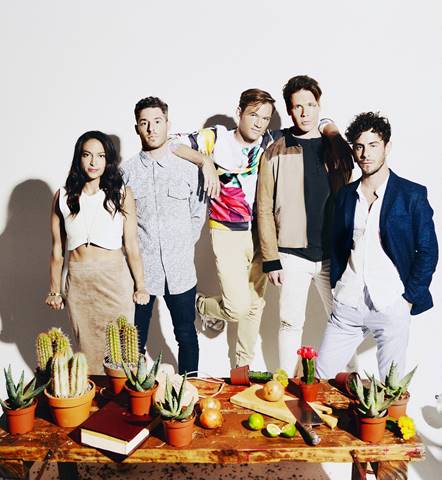 At a young age Jean-Philip began making music, and then studied for four years in Liverpool, until he was offered a song writing job in New York City. Grober has also remixed tracks for “Foster the People” and “Charli XCX”. St Lucia tours throughout the country and internationally.

I was able to speak with St Lucia and found him absolutely brilliant and a lot of fun. He was candid and very enlightening, with extremely thought provoking and heartfelt answers. Speaking with him was nearly a spiritual experience.

Louder Than War: I’ve never spoken with anyone from South Africa before, and I love your accent.

Wow, I feel honored to be the first.

I feel honored that you are the first. So how did you wind up in Brooklyn?…Musically?

Like you said, I grew up in South Africa, and when I was 19 I went to study music in Liverpool, in England. Then to cut a long story short, I got offered a job as a jingle writer, a music composer for a music house in New York. It was an offer that I couldn’t turn down, even though New York was never somewhere I ever pictured myself ending up at, but it would have been stupid for me to turn it down. So I did it and lived in Manhattan for the first couple of years, and then moved to Brooklyn.

So tell me about your newest release.

It’s called “Matter”. I feel like our first album was very tropical, and I feel like this album is a little less tropical. It’s more progressive in certain ways, more “poppie” in ways. It’s braver, it’s a little more abrasive at times….

Where do you usually perform?

You have these nights, it’s not every single night, you forget almost that you’re performing and you forget that there is an audience there. It’s almost like having sort of a transcending experience. It’s almost like it’s spiritual. You kind of become one with the audience, one with the band, and those are my favorite experiences. Not every show is like that. Every show is enjoyable in someway, but some shows just don’t obtain that level of connection, but when they do it’s just an amazing experience.

Well put. What is your personal definition of music?

Music is such a broad thing. There are so many different types of music, there’s music that some people would say is not music, and some people say that music that those people like, is not music. To me music is the most visceral form of art and self expression because you’re basically just hearing sound waves and then it’s entwined inside your mind and body without you even seeing any visuals. There can be music without any words, and it tells you that they love you, and you can just get that feeling from these tones. That to me is what’s so beautiful about music. It’s so expressive. It expresses so many things with such little information. You play 1 chord on the piano and it will invoke something. That’s why I love music.

So you go to a concert to see a band and one of the members of that band spontaneously combust. You are called to the stage from the audience to take his place, who is the band? In other words what artists inspire you?

Queen if I was replacing the singer, not that I would necessarily be able to sing like Freddie Mercury. If it was the guitarist I would probably choose a completely different band because I’m not a very good guitarist. I wouldn’t want to mess it up. If it was the drummer,  I would choose a completely different band again, because I’m a terrible drummer. There are some artists that inspire me and I don’t even like their music very much. Generally the quality that inspires me in an artist is when they surpass the expectations around them. I think of Prince, David Bowie, Michael Jackson, or Radiohead, Kanye West, for them it’s not about pleasing their audience, or trying to be appealing in anyway. They are just completely processed by music. That’s the way that I feel about music, I don’t feel like I’m writing something consciously. It just sort of comes to me. I go with it, and I normally try to go with the most surprising ideas that I have haven’t explored before. So it’s artists like that that really inspired me.

I love your answers, they are very deep and soulful. What was it like you going to school in Liverpool?

Initially it was a bit of culture shock for me. South Africa is basically sunny and relatively warm all year round. Everyone lives an outdoorsy kind of lifestyle. People are very loud and kind of brash in many ways. England is generally more of an introverted culture. If you’re riding the subway or the train people aren’t looking in each other’s eyes. I think when I arrived I was this loud, brash South African. I think when I spoke people just heard distortion in their ears. It took me a while to adjust, then after a couple of years I really fell in love with the place. I met my wife Patty over there. She was a helping hand for me. She helped me get used to the ways of life in England.

We more than decided to stay in New York. I see myself being here, having a house maybe upstate, maybe with kids, and I’d love to still be making music that excites people. And still have an audience that appreciates what I do. Not just because I’ve had a hit or two hits, but because I make music that they love, that they feel something, and it excites them.

If you could say anything to your fans and followers what would you say?

I would say, especially because of the times that we’re living through right now, if you disagree with somebody rather than blowing them up, let’s have a real open conversation with the idea in the back of my minds that we should find resolutions to it. If we can’t find resolutions, we still shouldn’t be killing each other.

That’s probably good advice. Do you have a favorite song that you like to perform?

Probably right now it’s between “Physical”, and “Home”. They are both high energy songs, and they are both a really fun journey for the audience.

You have been doing music for a while, how do you think the music industry has changed through the years?

Things happen in cycles. There’s sort of a musical revolution where there are all these new processes. For instance in the 1990s there was all of this kind of black-and-white music in the industry where the artist who had the most push behind the record labels became big. Then the labels lost control. I feel that when the musicians or the audience get control again more exciting things happen. I think that what is happening right now Is that the labels have gotten back some of that control again, they figured out how to deal with streaming and use it to their benefit.

Is there anything that you would like to say or promote for yourself?

If anyone has heard one of our songs, I would say go and listen to the album. We put a lot of effort and time and energy into crafting our records and it’s not only about the singles that come out. The reason that we chose the singles that we do, is because they’re the most palatable to the widest audience. There’s a lot of beauty and thought in everything else that goes on.