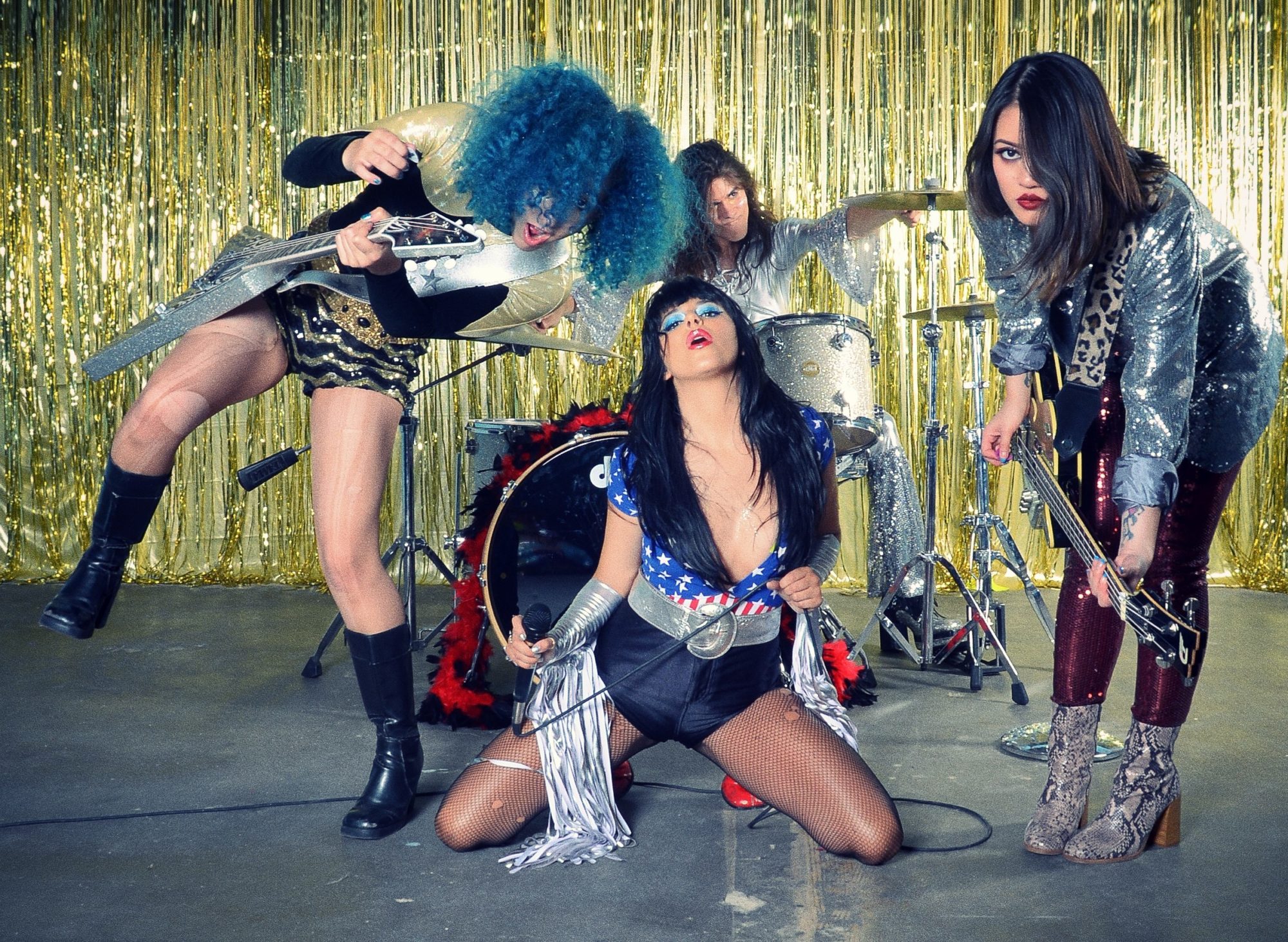 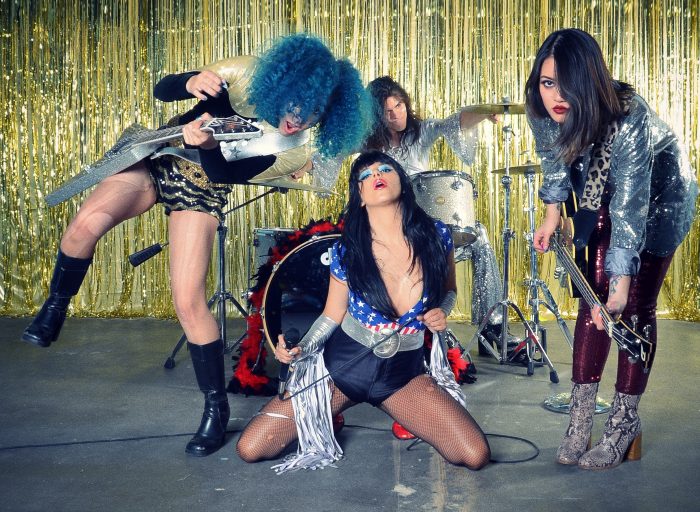 With songs entitled: “Pretty Boy”, “Miss Androgynous”, and “Bad Bitch”, as well as an album set to be released on August 6th called “Glitter City”, how can they go wrong? An almost all girl band,  the Glam Skanks faction, includes, Ali Cat on vocals, Millie on Bass, V playing guitar, and Jaxine  Sparkles, the only boy in the band,  who dresses like a girl, on drums. Their high energy sound resembles that of 70’s Rock ‘n’ roll, with an element of pop, and a touch of punk, as they dazzle their crowds with  songs about Drag Queens, and Hooker Heels.

The band members are all beautiful and talented, ( even the boy drummer ), and fun. They will be appearing on Kevin Smith’s hit, cult series, “The Comic Book Men”, and have also been chosen to contributed several songs to Kevin Smith’s new movie.

I had a scintillating conversation with the effervescent guitarist V, ( who coincidently happens to be the daughter of Bruce Witkin, a member of “The Hollywood Vampires”, the super group also featuring, Alice Cooper, Joe Perry and Johnny Depp).

Louder Than War: Glam Skanks, is a fabulous name, how did that happen?

V: It was actually mostly a friend of ours. We were looking for a band name. He was actually making jokes, he was making lamb shanks and put edible glitter on them and they became glam shanks. We just kept coming up with things that rhymed.

Now, you’re the guitarist? How long have you been playing?

Are you so excited about going off to Red Bank to appear on The Comic Book Men?

Tell me a little about your band?

It’s pretty much kind of a funny story of how we started. I had just quit another project that I was working on. I immediately went to craigslist and started looking at ads and posting ads. Right after I posted an ad looking for anybody, a singer, a drummer, whoever I could find, I found an ad from a singer looking for a band. Our ads were almost the same. So I sent an email out to her, and as soon as I had sent her an email, I received one from her. When we met up for the first time , we played T-Rex songs, Heart, and that was it.

So, you’ve done some stuff for Kevin Smith. What exactly is it that you’ve done?

So he needed originally a band to record some public domain cover songs for a scene in his movie. He had already gone to my dad because he was already recording his daughter and Johnny Depp’s daughter for some of the songs that they were singing in the movie. When he talked about needing a band to record the songs, my dad showed him our stuff and he liked us enough and wanted to record some of the songs. He wound up using our original song, Miss Androgynous, as well.

You’re about to begin a tour, correct?

Yes, where leaving on the 12th.

What can your audiences expect?

They can definitely expect to get covered in glitter.

What was it like being raised in a musical family?

It was really cool. I got to experience so many really cool and great things. I got to go to great shows, and meet great people. My dad was a great influence on me, just to watch him do what he does, being in the studio when I was growing up, I got to hang out with musicians which was great.

When did you decide that you wanted to be a musician?

I kind of always wanted to. I always loved being in the studio with my dad, and going to shows. When I was 12, I went to a show, and I saw the guitar player, and that was my moment of “Oh, that’s what I wanted to do with my life”.

Do you write your own songs?

Yes. It started off with mostly me and the singer because we’re the two original members. Since we’ve got a drummer and bass player now, they contribute too.

You’re an almost all girl band?

Technically our drummer is a guy, but he dresses like a girl.

I love all of it. To be up on stage, the energy, feeding off the crowd, everything. It’s such an amazing experience.

Growing up, who were your musical influences?

Where would you like to be in 10 years? Also if you could play anywhere in the world, where would it be?

Really just playing with the band, we all love each other so much, and Madison Square Garden is obviously like one of the go to big ones.

Who is the most famous and explosive celebrity that you’ve ever met through your dad, or through life?

What is your own personal definition of music?

Personally for me an outlet for everything. It kind of helped me be the person that I am.

If you could say anything to your fans, what would that be?

It would definitely be to girls out there, anyone can do this if you put your mind to it.