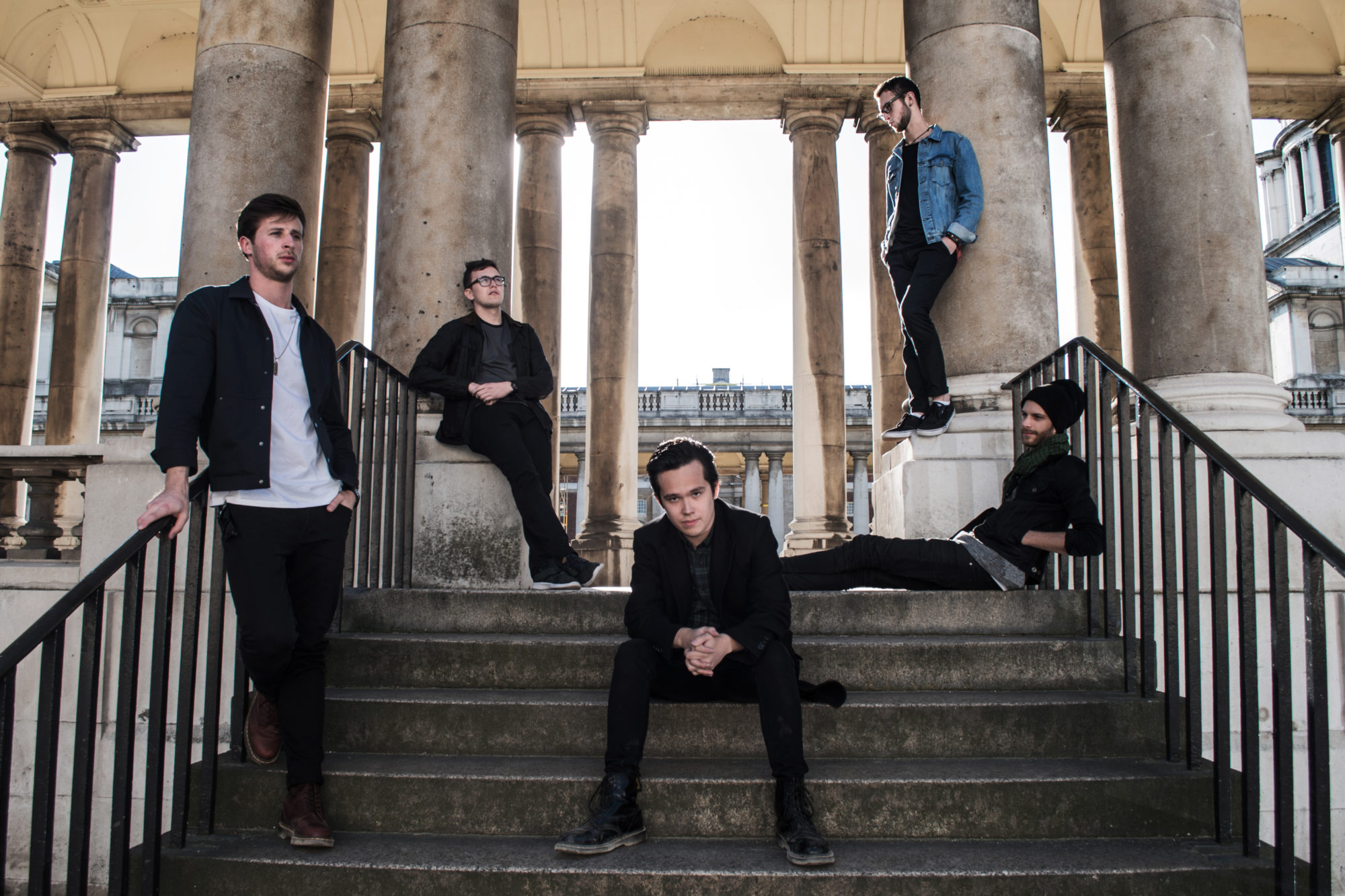 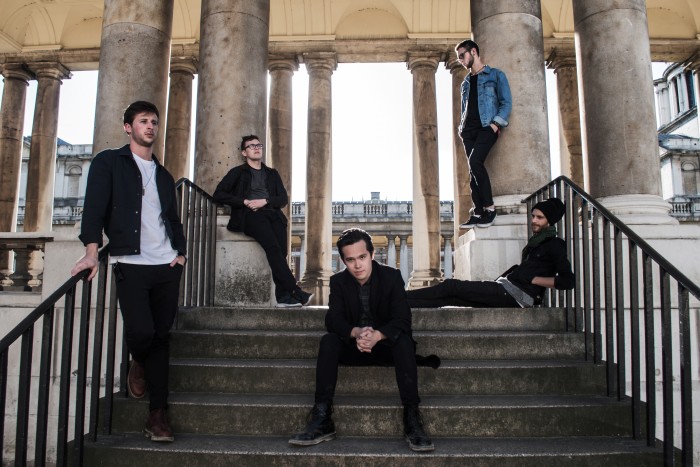 The 5 piece London, alternative band, originating in 2014, as “Metasic”, is in the midst of releasing their new single, “Breaking through the Walls”(January 29th)’ and their self-titled EP on March 11th 2016.

In October the group announced the decision to change their name to “Fades”, named after the Queens of Stone Age song, “In The Fade”. Fades consists of: Joshua Woo on vocals and guitar, Alessandro Melchior, on guitar and keys, Lucas Mendes, playing lead guitar, James Dibble on bass and drummer, Keir Adamsom.

After touring throughout the UK and then ultimately supporting “Nothing But Thieves”, they traveled to Italy to record their EP, and a short documentary to go with it. Louder than War caught Fades and was able to ask them a few questions.

NOTE: All answers are given by Joshua (frontman) minus question number 4 which is answered by Alessandro (guitars/keys)

1. You have toured throughout the U.K., what were some of your most valuable experiences that you received from being out on the road as a relatively new band.

The most valuable thing we learnt from being out on the road is that you really have to play each show like it’s the biggest show of your life. It doesn’t matter how you’re feeling. You might be sick, you might be tired but when you get on that stage you have to give it your all. The audience isn’t stupid they’ll know and feel it if you’re not giving it 100%.

2. Who are your musical influences?

We have a wide range of influences. We all enjoy different sorts of music which is a healthy thing to have really. Of course we all have a love for rock music but for example Lucas, our lead guitarist, is a big Jazz head and loves Robert Glasper, Lionel Loueke and Jonathan Kriesberg to name a few. You can really hear the influence in his playing. He’s always coming up with wacky, off the wall, musical ideas that really add extra colour to our sound and I think a lot of that comes from his Jazz background. We also all love Hip Hop. I think To Pimp A Butterfly by Kendrick Lamar was the album we listened to most whilst recording this EP. Keir’s particularly into it. Being a drummer the focus Hip Hop has on rhythm and groove is a big attraction for him. James has a classical background and that has a great influence on the way he treats harmony and his approach to bass playing. One of his favourite composers is Dvořák who he calls ‘a harmonic genius’. Me and Ale are both Radiohead nuts. We work pretty closely together when writing so we’re constantly listening to music together and showing each other new things. We listen to all sorts from FKA Twigs to Neil Young to Tame Impala to Porcupine Tree to Kate Bush to Aphex Twin… the list is endless really. We wanted this EP to be rooted in rock music to give ourselves a solid foundation to build from. We’re keen experimenters though and we’re looking to add new elements to our music. The closing track ‘Everybody Knows’ hints to where we’re headed next I think. We were a little worried about putting it on the EP actually as we thought it would be too different to the rest of the tracks. It really worked though and it’s probably the track we’re most proud of. There’s something special about it and we’re looking forward to exploring that sound more and seeing what else we can do with it.

3. Joshua you have an amazing voice, how did you all get together?

Thank you! You’re too kind. As for how we got together. I had just recorded an EP called Falling Into Place and I needed a band to perform the material live. I called on a few friends I’d met playing around London and as fate would have it we immediately clicked. The chemistry between us was obvious. We picked up our instruments and started playing and their was just this new life and energy to the music. So we looked at each other and said ‘Yeah, let’s do this’. We hit the road and started writing new material – refining our sound. Then Ale came up with the crazy idea of going to his home country of Italy to record these songs. We returned super buzzed and here we are ready to release our Debut EP!

4. I understand you filmed a documentary while recording your release, can you talk about it for a minute.

Alessandro: When we planned this whole experience of recording the EP abroad we didn’t know what we were getting into really and as if it wasn’t difficult enough, I had the idea of getting the whole thing on video. Our photographer, Chiara Melchior, came down to film it all and the result, after hours of editing, was really genuine and emotional. We had a tight schedule and we had to stick to it, despite amps breaking in the middle of a guitar recording session, language barriers, incredibly hot weather and unexpected hailstorms. It was mad and a good part of it is in there. It’s a simple testament of the enthusiasm and passion behind those 6 songs, and we lived intensely every second of it.

5. Who writes your very dramatic and emotionally filled lyrics?

That’d be me! I’m quite an emotional person which obviously reveals itself in the lyrics. I also think it’s important for the lyrics to match the mood of the music. The music almost always comes first and in this case the music was raw, fast and furious. I spent a long time writing the lyrics on this EP making sure it had the emotional impact the music was having on me. I’m also very into the idea of conveying the full spectrum of human emotion. So on this EP there’s moments of joy, sadness, passion, love, anger and all that good stuff. I wanted every song to have it’s own personality so I consciously tried to avoid any of my own habits and cliches when lyric writing. Instead opting to be honest to what the song was about and the themes it conveyed. I’m really happy with what ended up on the EP so I’m glad you mentioned it.

6. What’s your favorite thing about playing live, and do you have a favorite song that you like to perform?

Considering that playing live and recording in a studio are two very different things, getting back to gigging always feels right and natural, it has the added bonus of having immediate pay back. You get to feel your band mates having a good time beside you and you get to feed off of the enthusiasm of the people in the audience. It’s a dialogue, it’s chemistry. It was for this reason we decided to have quite a simple production for the EP. What you hear on the record is what you hear live, it needed to sound authentic. We wanted to honour simplicity. Dog On A Leash is definitely our favourite track to play live. It was one of the first songs we wrote for the EP so we had some experience playing it live before we went into the studio. You can probably hear it in the recording. All the parts on that song were done in one or two takes. Which gives it this awesome, fresh vibe. We love playing that song live. It’s hard to explain how it feels but Lucas always says ‘I can’t believe that was us’ after we’ve performed it. It’s like an out of body experience. The song seems to take on a life of it’s own and we’re just along for the ride. It’s pretty cool.

7. Do you have your next tour planned?

We’re in the middle of planning it at the moment. We’ve got a few dates confirmed already but we can’t really announce anything just yet. People should check our website or facebook for details on the tour. Having said that we’re really looking forward to hitting the road and playing live again. All our energy has gone into preparing this EP for release and as we’re completely independent that meant we didn’t really have time to do anything else. These songs are meant to be played live and ripping these songs up in front of an audience is going to be such a buzz.

Oh yes! We have a lot in store. It’s already started and our debut single ‘Breaking Through The Walls’ is now available to stream online. We’re getting a lot of great feedback for it from our fans and the media, which is awesome! The video for it will be coming out on the 29th January – alongside the single being downloadable. We’re so excited about releasing the video. We had such a great time making it. Without spoiling anything it’s basically us, a van and a whole lot of fun. Then we’ll be releasing our self titled EP. It’s going to be unveiled in style at Proud Camden on March 10th. We’re planning the event now. We want it to be special and something that people will remember. The EP will be available as a physical CD and digital download worldwide from Friday 11th March. The documentary of the EP and our time in Italy will also be coming out around the same time. After that we’re hitting the road, gigging as much as we can and writing new material for our next release. It’s going to be an exciting year and we can’t wait to get our heads stuck into it.