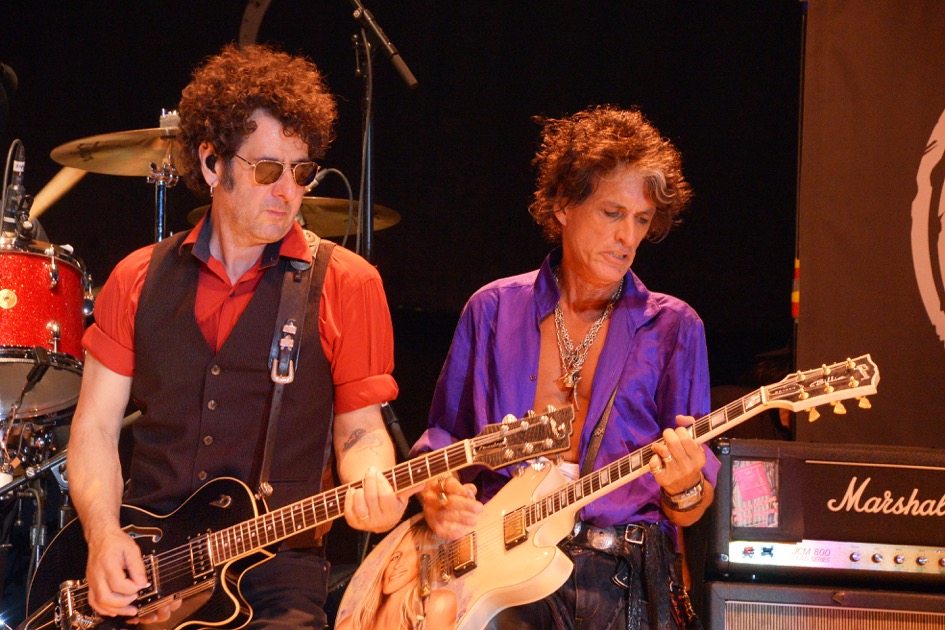 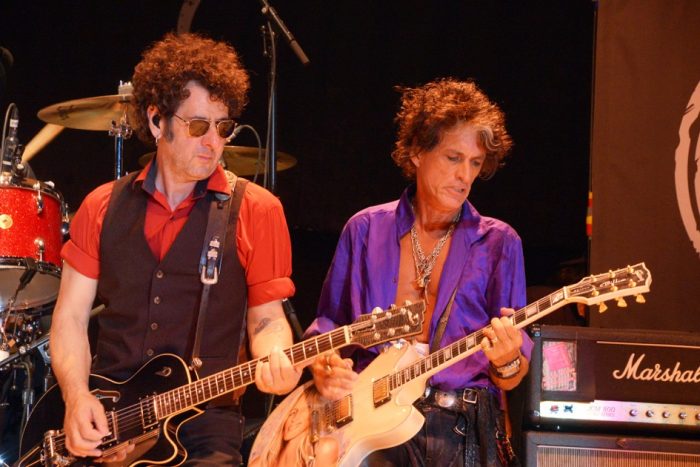 An amazing musician, an amazing human being, and one of the most intelligent, and enlightening artists I’ve ever had the honor to speak with, is Bruce Witkin, one of the members of the “Hollywood Vampires”. He brings to this world a wealth of knowledge, and the most poignant, and magical advice, almost on a spiritual plane, for those hoping to celebrate a career in the music industry.

Besides touring with the vampires, Alice cooper,Joe Perry, and Johnny Depp, he has also toured with Adam Ant, has had his own bands, The kids and Supremium has produced for multi artists, owns his own record label, has a daughter with a successful band,(Glam Skanks), plays many instruments, sings,writes, and I can go on  …. but the fact is he does this all from the heart. He manifests and evokes a certain compelling vision when it comes to music, the likes of which I had never heard before.

Louder Than War: I just wanted to clarify how you became involved and part of the group “Hollywood Vampires”?

Originally the thing started with Alice and Johnny. I always wrote with Johnny, so when he started working with Alice, he called me over to write with him because Alice wasn’t in town. So Jonny and I and one of Alice’s guitar players, Tommy Henrickson started writing just music stuff to send to Alice. So I was in it kind of from the beginning. The touring band came in secondary.

I knew that you did the tour, and the Grammy’s with them, but I never understood just how far that went.

Well there’s always different levels of the business side of music. There’s partners, there’s members and then there’s the band. As far as the Hollywood Vampires, it’s structured with Alice, Joe and Johnny, but Johnny and I have been in since the beginning. Everyone is a professional musician. We all got along, Matt and Robert and Tommy, as well as Duff when Duff just joined up last year. We played the Grammys with Duff. Then when Guns and Roses came out, Duff went with them, and we got  Robert from Stone Temple Pilots. I don’t think I’m stepping my boundaries, the whole idea of the Vampires, is really,  the record had a bunch of great historical rock musicians on it. The band now really kind of came together. It started to feel like a band after a couple of weeks of rehearsal. I’ve known Johnny since I’m 17 or 18. My involvement in the project began because of our friendship, for sure. I think by just getting to know the guys in the band, and then working with Alice a little bit and Tommy from Alice’s band, and of course Bob Ezrin, who has been with Alice forever, Ezrin the producer helped with the record,….he basically produced the record, but Tommy and I got co-production credit….. the whole thing was a joint effort on everybody’s part. The proceeds from the recording I believe are going to “Music Cares”. So it was all done for charity.

Well that’s amazing. You have played with a bunch of very well known, great and powerful
artists, aside from the Vampires, You have had your own bands, you’re a producer, you
sing you write,you are multi instrumental, is there anything musically that you still wish
to achieve?

Its weird, to me, that as I got older and once the business changed , my focus changed to mentoring younger artists. I was fortunate to start a label back 2007.  It feels like the day I started that label, that does well called “The White Buffalo”, and the other artists even if we weren’t successful in selling records, I believe I passed on everything I could to them from my heart. Everything I’ve done is from the heart to try and mentor an artist, and make them understand how hard it is out there, and what competition there is… My daughter, she has a band, trust me, I wish she wasn’t good, so right now my focus is releasing her record, in a very independent way. I believe the way of the big label is still out there , but it’s not like it used to be.

Any young artists now-a-days, if they work hard and pay attention to their fans one at a time, they can do it and survive in the business. It’s not like it used to be where you had to get discovered.

What’s interesting with the Vampires is there is a built – in fan base with three guys that are extremely popular. We did a few originals, but mainly it’s cover songs dedicated to people that we lost over the years. I’m sorry it came to an end,  this was a very well – put – together tour, and nobody works harder than the crew on these gigs,  we did 17 shows in 25 days.

Its all for that 90 minute show, I felt that I had to go earn my keep with the audience. I wasn’t just going to sit back, play, and not move around. The cool thing with this band is that there was a lot of energy on stage, Alice Cooper is 68 and is just killing it every time.

Besides the Vampires, What was your most fun tour ?

I’ve been fortunate over the years to have a few things. I never saw myself as a side guy. When I moved out here, I was gonna make it. . . went through managers, got close to getting a record deal and it never happened. At a certain point I decided I’ll just produce and try and pass on what I could pass on. The other two major tours I did were when I toured with Adam Ant, which were fun. It was after all the makeup. That was my first real tour. Touring with Vanessa Paradis was fun too, that was all in France.

But if I think of tours being fun, it was probably some of my earlier tours with my own band. You just get in a van with your pals, go out and hit the road. Those memories stick with you forever. The Adam Ant tour was an opportunity to be a working musician, and I knew Adam, so that was fun, but there is something about the camaraderie of a band, and I think knowing Johnny for as long as I have was a taste of what we came out here to do together. Someone said that “Every time we take a picture of you and Johnny on stage, his smile seems to be bigger than in other pictures”.  I never noticed that. Maybe it’s because that’s what we came out here to do. I look back at my friends career and its astonishing. I feel honored to still call him one of my best friends. I think that’s what people see on stage when we’re next to each other, just playing it brings back memories of the old days. I think that the first band you have as a teenager, is always “that” band. Some bands have been lucky enough to take that to the top. With our band that didn’t happen. We’ve done reunion shows, with our band, The kids back in 2007 and 2008. My mom, she was a booking agent and manager, so when she passed we did a couple of shows with the original members. So I think when Johnny and I are up there now, We’re kind of thinking of those times, obviously life goes on, you grow up, you have kids and responsibilities, but there’s always something in your soul about that first band, that first fraternity, that brotherhood, It never disappears, we’re all good friends still the four of us.

The funny thing is, we never broke up we just stopped playing. Every time we get together we say, “its just a long play between sets”. But right now my focus is mentoring younger artists. To survive playing music these days.. it;s so different than our days.

I remember Alice Cooper back when he wore Straight jackets and snakes on stage.

Im blown away by his dedication, his family life, he and his wife have been married forever. Alice is an epitome of humanity of rock’n’roll. I watch the guy kill it every night. He figured out life and happiness. That’s the key. Sometimes this business can really tweak your brain, I’ve seen it happen. I’m happy for him, I mean he is 68 and there’s nobody that could wear leather pants the way he can.

I might have to disagree with that. I’ve recently seen Adam Ant in them, and he’s looking pretty good.

Absolutely but Adam’s not 68, I love Adam. I got to know him well on tour.

I understand that you played on a couple of his albums, “Persuasion” was it?
I played on the “Wonderful” album. The “Persusasion” album, we actually toured that album without any record label support. My first tour with Adam was, when whatever happened with him and MCA fell apart. He went and did the “Persuasion” tour anyway, without a record album. I think somehow people were releasing it with cassettes.
I think it was one of his best records.

Did it ever get released?
I’m not sure, but it’s so easy to get anything off facebook these days.
I remember because that was the first tour I ever did with him. He financed that tour himself, Then the “wonderful” record was done on EMI Capital, so I recorded on that one, which was like a dream come true. I recorded at Abbey road Studios, I was in heaven.

It’s interesting being in the business as long as I have and watching it shift. The big machine still exists. I have nothing against it, but what it does is far from art. The big machine is in control of the radio stations, but they’re not in control of the internet. So you can get something out there that’s great that people share, and then you can go out and kill it live. I think you can survive out there. Someone once told me something when I started my label, he said, ” don;t ever sign an artist that doesn’t work as hard as you”. Today there are very few avenues where you can get a blast of promotion. Back in the day if you played “Saturday Night Live”, It was good for 250,000 records. Now you’re lucky if its good for 2500 downloads of your single. There is still a lot of great music out there, because you have people doing it for the right reason. You gotta do it for yourself, and have a purpose, Computers didn’t ruin the music business, marketing ruined the business. One thing about music.. Only music can take you back in time.