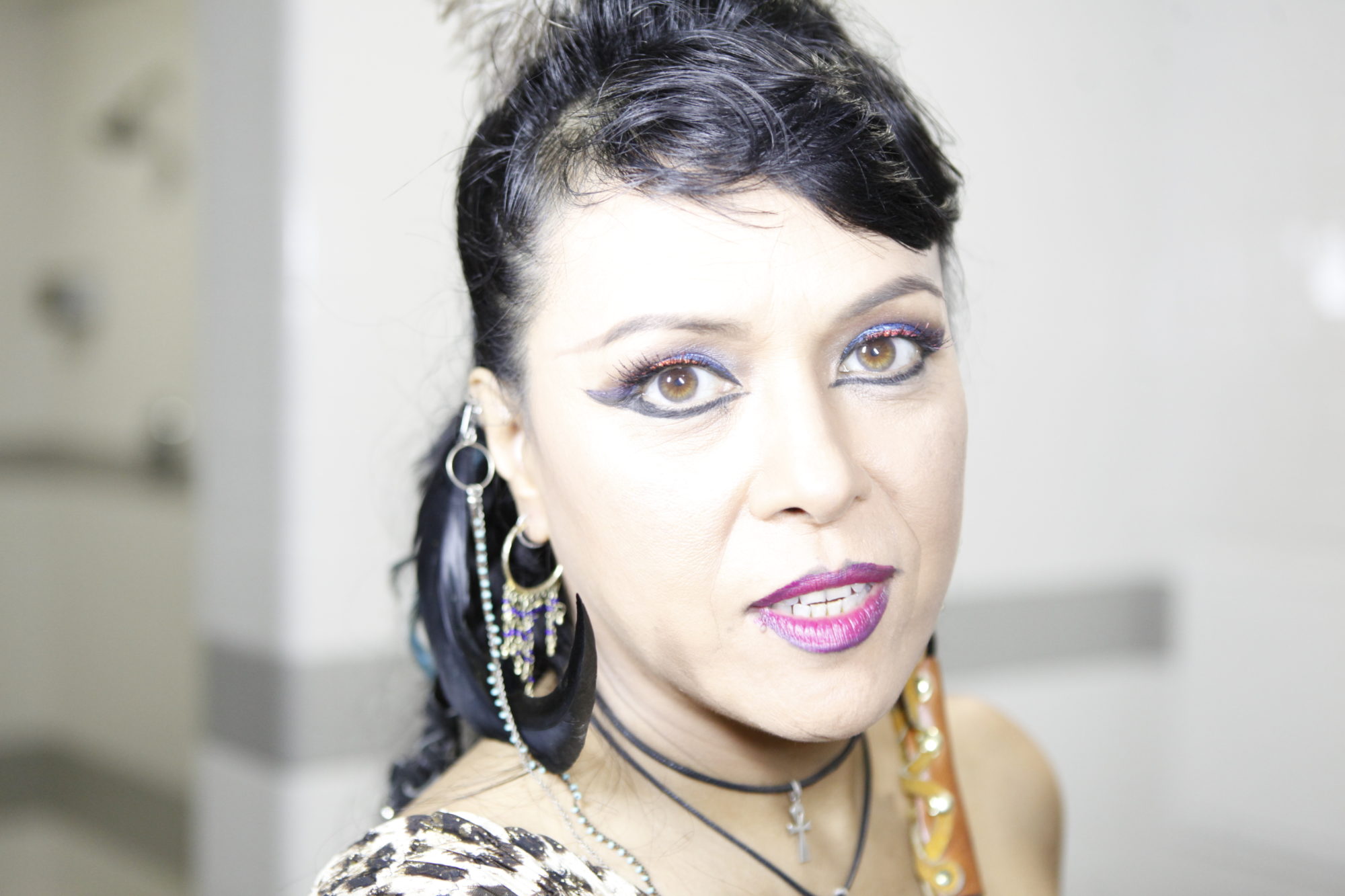 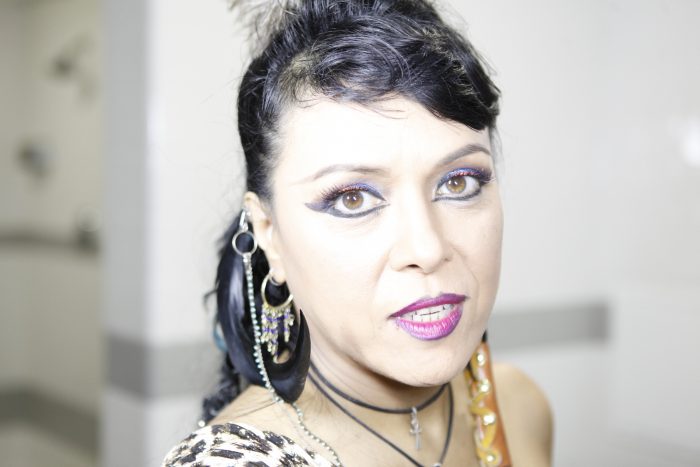 The vivacious, effervescent lead singer of the 80’s sensational punk pop band “Bow Wow Wow”, Annabella Lwin will be embarking on a major UK tour, beginning with “The Rewind Festival”, in Scotland on July 24th.

Every young man’s heartthrob in the 80’s, Annabella began her career at age 13, and although sometimes surrounded by controversy, she has emerged victoriously, and continues to write her own songs, sing and entertain her fans.

Best known for the song, ” I Want Candy”, she has also appeared in or wrote songs for movies including,  “Thief of Hearts”, “Desperate But Not Serious”, “Scandalous” & Entertainment.

She was also invited to do a tribute song for a Bob Marley album for the “Specialized Project”, a cause created to help the UK teenage cancer trust.

Annabella is probably one of the most enlightened, interesting, and fun filled ladies that I have spoken with thus far. Very spiritual and sparkling, we shared views on nearly every topic under the sun. Way ahead of her time in the 80’s, I found her to be candid, strong and empowered….

Louder Than War: You started in the music industry when you were just a little girl. I mean you should have still been playing with dolls….what was that like for you?

When I first auditioned I was 13 and a half. I was still working at the dry cleaners, a job my mother got me, God Bless her !  It was after I’d been working several months,  I was asked to audition for this unnamed, unknown band
I was auditioned at 13 and a half, and people say, “It must have been what you were planning on doing”.

I say, ” absolutely not”. Actually I wanted to be an air stewardess. Really, that was my plan. I wanted to be this gracious lady in an airplane serving people, believe it or not, and traveling all over the world, and being able to enjoy that. As it turned out, it happened through singing even after they decided to kick me out, a few times and convinced me to go back…

It’s weird isn’t it? The universe does answer our questions, just in different ways then you’ve planned.

We have to trust the universe more, that’s why I chant. I want to be on the right path, as opposed to the wrong one.

I can’t waste precious time doing things for the sake of just doing them. I need to do things that make a difference. But yes, I’ve seen a lot through the years, especially in the industry.

I think if I had known then, what I know now. Its taken a long time. It took a young girl, without any experience
what so ever, a while. It’s like most of us …when you get to a new school, or a new job, we’d have to find our feet as they say.

Your latest EP, “Willow Tree”, looks to be very earthy and spiritual. Is it out yet?

It was released it in February 2016. and it is my very own EP…! because I wrote all the songs, as well as singing on it. I started writing at the age of 17. I started writing on “When The Going Gets Tough, The Tough Gets Going” album. I became a writer because of  Matthew Ashman. he was the original guitar player in my band.

He unfortunately passed away in 1995. he was the person that got me into that craft. He said to me,  ” Haven’t you got something to say”? I said, ” Yeah”…and that’s how we started doing, “When the Going Gets Tough, The a tough Gets Going”  album. We sat down and wrote that in his living room. I’m really very proud of that because it was my first experience of writing, and I’ve been doing it ever since.

Getting back to my recent EP, it’s one of many, but it seems apt because I have a song on it called “Spirits of the Earth”,  it’s about the Earth.!  The rest are about, what I come from, what I do, who I am. I love “Garden of Pleasure”, it’s a very upbeat song. I perform that song live now with my band.
It’s different when you do things at the studio. That’s the beauty of doing things at the studio, which I hear is getting a little out of control with all the twiddling of the knobs, and the twerking of the singers that can’t sing in tune, when they really should be doing that already !! When I sing in the studio, I like to try and have a ‘live’ vibe, a ‘live’ feel, so that the people  ‘feel’ what I’m singing. The whole thing about studio, is you put something down for now, and then you go out live and perform it for the “next now”, as I call it. You just perform it and add stuff to it. It’s all about “keeping it live”.

But you can really sing…

Thank you!  but I don’t know if I can really sing…I’ve never thought of myself as a great singer. I’m an ok singer. When you say “singer”, to me when they call singers “pop” singers, I don’t know if that’s a compliment.

Really pop is what’s popular at the moment. Singers to me are people like Lena Horne, all the 60’s singers, all the Motown & Opera  singers. I love all kind of singers! I’ve come to know it’s a real craft and art in singing. The idea is really to carve your own  Niche, which is what I was told by Malcolm, right at the start, which I never appreciated back then. I was singing a song called “I Will Survive”, by Gloria Gaynor. That was the song I was singing when he came to hear me at my mother’s home. He said, “do you know anybody a bit younger that you can sing along to”?

He slammed The Ronettes record down. He introduced me to The Ronettes. But I completely get it now, it took me a LONG time.

If you had to give up music, what would you do to be creative?

That’s not in my vocabulary right now.

That’s one of the better answers that I’ve gotten to that question. What’s it like singing in a Twitter world?

Well I tweet here and there…I don’t know if I’m an official tweeter. I’m excited to be part of a new generation. A lot has changed obviously. It’s a good thing. It just keeps evolving. There’s an old saying, I don’t know where it came from, but it’s “Don’t put your daughter on the stage Mrs. Worthington”, and that’s when i kind of realized what that meant, through all these years. going from being a novice, to being in a band, to doing what I do now actually.

It definitely is not what it used to be when I started out. I think it’s become more homogenized. I don’t know if music is going to get better or worse, let’s put it that way. Everybody’s doing music in their living room now. The Reality TV world, they tried to look behind the door like “The Wizard of Oz”, but it’s a bit of a disappointment, isn’t it?

The way I look at it is, if people are doing it for the right reasons, I don’t see any reason why they can’t continue doing it, if they are doing well from it. It’s just the ones that are doing it for the wrong reasons…..the music industry has become more of a ‘business’  than it ever has been. When I started out it was all about creative stuff. It was all about being as creative as possible. Now a days if you’re an artist you have to understand the business aspect of it as well. I’d definitely advise  younger artists to have a good manager. In answer to your question, I’m excited to be part of the new generation, and I hope I can continue to be part of that NEWgeneration.

You are very spiritual.

I do chant. Everyday. Usually it’s twice a day. I usually have to do it before I start my day. That’s what I do to keep my mind, body and soul together. It been something I’ve done for many years now. My father was a Theravada Buddhist, but my mother was an English Christian lady. I guess I’m a child of two worlds really.

I was sort of lost for a long time spiritually, and it wasn’t till I met  Nam Myo Ho Renge Kyo…things became clear. It comes into everyone’s lives at different times and in different ways. first time it touched me, was in New York…one of the other artists on the show was Grace Jones, she was a lovely lady.

I heard this chanting coming from this room and it turned out to be another North Londoner, Lynne Franks.

I was born in Burma so I guess buddhism was intrinsically in me. I started chanting, and I’ve been doing it ever since. I love it and it helps me greatly. When you start discovering spirituality, you start  discovering other things. Your life really opens up. Can I make a quick mention?

You can say whatever you want…

I’ve recorded a song for a Bob Marley tribute album that is coming out in the next couple of months.

It’s an album to help teenage cancer patients and the project is called “Specialized”.

The crew of people who do this every year, do it for different causes, for different reasons, to raise money for the cause. Its called ‘Specialized’ Project. They are doing a show in November, it’s going to be a really big show, with some really big artists. They do this show every year, and I was asked to do a song, a Bob Marley song which is really cool called “Cheer Up”. just wanted to make mention of that !  It’s November 11th, 12th and 13th,

In the UK and I will put it up on my ‘like’ page on Facebook. You can go on line and look it up.

I will like your page directly after our conversation.

Thank you !  I like to get feedback from fans. Obviously my UK tour dates are there. Short but sweet…I’m looking to doing more live shows, that’s the reason I’m still doing music…for people who want to hear me sing and still see me, and to help causes I believe in….that’s the simple, honest truth of it.