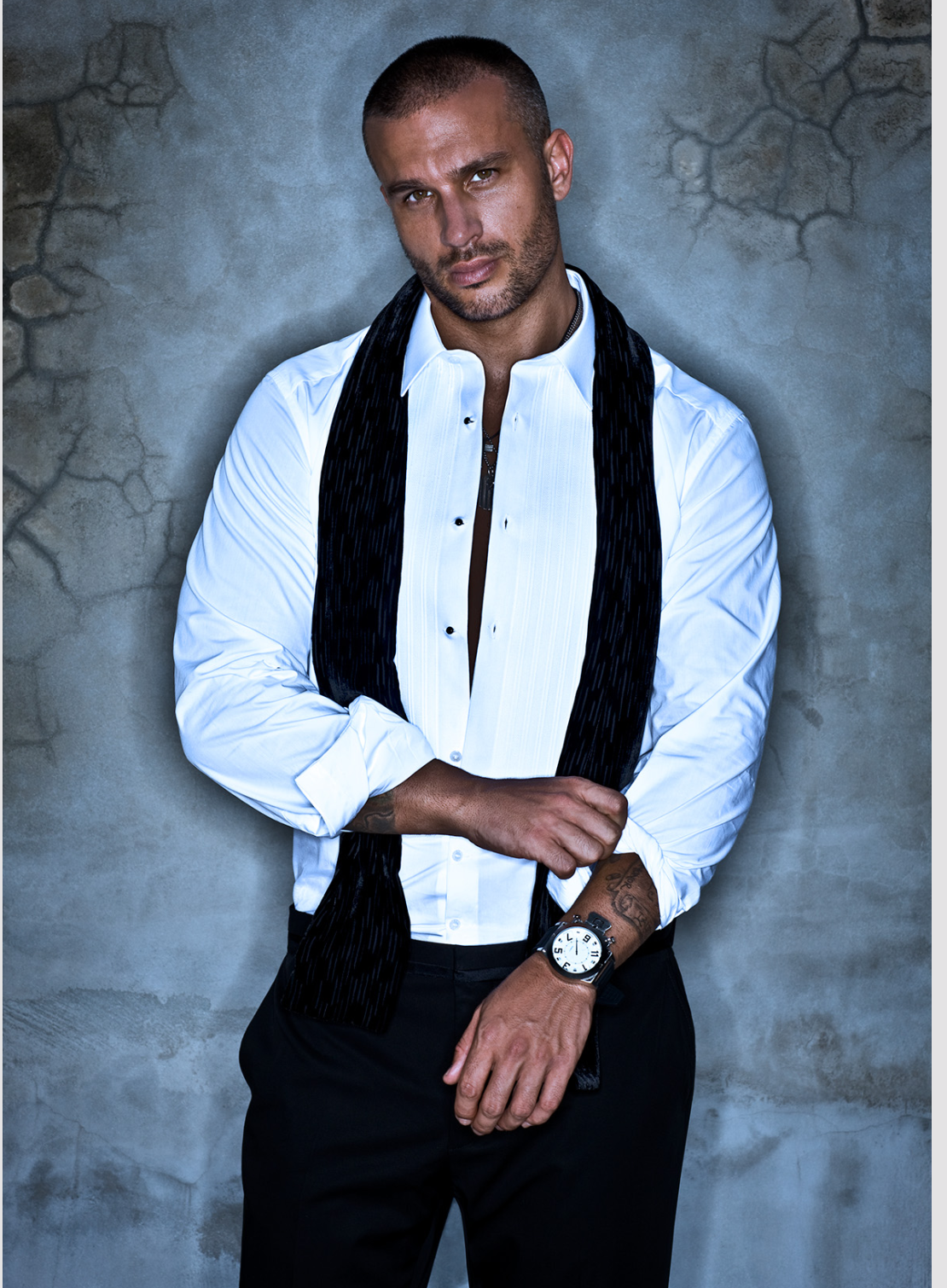 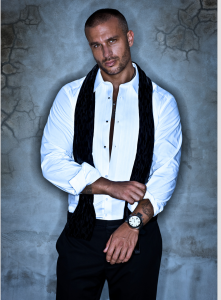 You may know Andrew McLaren from his appearance on NBC Stars Earn Stripes, where celebrities were coached by real life military and law-enforcement members through military exercises to earn cash for their favorite charity. Or as Captain Sampson in the heroic film Battle For Haditha. But as a Marine Andrew served in Iraq and Liberia and was assigned to the Fleet Antiterrorism Security Team. Before he enlisted he was also a powerfully successful model. Now he travels the world, and lives a life that people only fantasize about.

Louder Than War: So can you give me a brief synopsis of how you started modelling and acting  after being a Marine?

Well actually I was modeling before I became a Marine. I did a couple of commercials, ads in magazines and stuff like that. It helped me pay for my college. Then I always wanted to go into the military, there was a million things I wanted to do back then. I had the looks and the talent back then, but I didn’t have the confidence. That’s what the Marine Corps gave to me. I went in right after September 11, I went in October 2001.

I always wanted to go into the military because my dad served in Vietnam, and then he became a successful stockbroker. It always appealed to me because of the travel, and the physical fitness aspect. So I went into the military and it ended up working out for me. I went to Spain, I went to about 30 countries. I was in an anti-terrorism unit, and we had to go all over Europe and Africa. So we went to Italy, France, Estonia, Sicily, all these countries, and I had never been out of the country before. Here I was 21, and traveling the world. It was amazing. When I got done doing that I went down to Liberia to guard the Embassy. Then I went to another unit, and I went to Iraq.

No, not at all. Not even the slightest. We were doing stuff like jumping out of helicopters, sliding down ropes, and wearing ski masks. In Baghdad it was all about killing terrorists, that’s all we wanted to do. We were America’s SWAT team, America’s 911. We were drinking whiskey in the bar, hitting each other in the nuts, smashing bottles over people’s heads…. Then our beepers would go off saying we have to go back to the base because we have a mission in some country that we had to leave for. It was kind of like out of a movie. I remember having a girlfriend, and in the middle of making love I had to stop and run back to the base because we were getting deployed.

That could be a little awkward.

Yeah, that’s the way it was back then. Looking back it was definitely one of the best and most exciting times of my life. It was just a magical time looking back at it. After my time was done in that unit, which interestingly, it was the same unit that went to Benghazi the day after the big controversy, that was actually the same unit I was in. FAST, they guard nuclear weapons, they guard the President of the United States, and they protect any Embassy that comes under attack. So then I got honorably discharged from the military, and got hired by the NYPD. However that year they cut the rookies salary to $23,000, so I had the opportunity to try out for Blackwater, and I made the cut. There was a lot of cops that tried out for Blackwater, but didn’t make it because they didn’t know how to shoot machine guns.

Blackwater was founded by a Navy seal who was the richest guy to ever serve in the military. He started the most notorious company in the history of the world called Blackwater. It basically paid for all the Republicans congressional campaigns and in exchange he got multi billion dollar contracts from the government. They work for the CAA whacking terrorists, and they did what I did, which is Guard Senator Tom McCain, and all these government diplomats in Iraq.

Blackwater had the best jets, the best tanks the best planes, machine guns…. We were really a good company. We never did anything wrong, all we did was keep them in safe. Obviously there are many books that will dispute that, but we were just all doing our jobs and protecting who we had to protect. In an area in Baghdad we had 60 co-ordinated attacks on us every day. We would have lights going off on our suburbans, we had to drive on the wrong side of the road, we had helicopters overhead to get our VIP out to where he had to go. So it was definitely an all out action movie.

I would come back to New York and drive Lamborghini’s because I was making a lot of money, I didn’t have any kids back then, and I didn’t know if I was going to get killed. It was fun. I was 25-years-old and making $300,000 a year, most of it tax free.

I ended up meeting my wife who was a model, and we were married for six years, and had three kids together with a messy divorce, but we have since become cool. In that time I’ve had three TV shows for the Discovery Channel, I’ve done a bunch of movies, I’ve also done stuff like protect ships from pirates.

Yeah, real pirates. Basically after Captain Phillips was kidnapped they hired me. I would guard the ships from pirates. These Somali pirates took 47 ships.

I have never interviewed anyone remotely like you. You say you have three kids, aren’t you afraid you’re going to die?

I gotta pay the bills. It seems easier and safer to just act. Well, I do that. I was just in Sri Lanka and produced three films. I do love acting and my TV show is all over the world.

My girlfriend is a supermodel and she just saw me on TV in Italy. That’s how I got the movie in Sri Lanka this year. The producer was watching TV in India and he called me up. So that’s cool but at the end of the day, the money in acting has gone way down. I’m getting paid a lot of money to do what I do, and I’m good at what I do.

I find that art does imitates life because on my show I’m this guy, I’m doing all the stuff this guy kind of did in real life, but it’s sensationalized. People watch me on television, and they want me to be the same guy that they see on TV. So yes I was in the Marines, I was in Blackwater, but then I get put on TV in an exaggerated version. So yes I’d rather act, I’d rather be like George Clooney or Brad Pitt, but in the meantime I feel like I’m changing the world, which I’m really good at.

Right now, because I have the kids, I’m going to do what pays the most. Until my acting career could match my career protecting people then I’m going to keep going with the money, but I definitely do want to get more roles.

I think I’ve gotten enough ammunition, pardon the pun. Is there anything else that you’d like to say?

I have a beachfront in Puerto Rico, where my show is very popular. What I’m doing, is, the economy is bad in Puerto Rico, and I want to give people hope down there. So, I’m going to be having a poetry contest, where I am actually giving a cash award. I’m going to have a bunch of celebrities flying in from Hollywood to be the judges. I’m doing this the first week in May.

I also write, and I love poetry. That’s one of the reasons of how I was able to get my girlfriend. Basically the reason why she likes me is because I write her really nice poetry. So I want to have kids being able to express talents, because the arts program in Puerto Rico has been slashed, because there is no budget. The place is bankrupt. So many people are forced to drop out of school. I want to give them an outlet to be able to express themselves creatively and then give them some financial incentive. Everyone there is working for five dollars an hour there.

Anything else, because you’re very interesting.

You could just mention my love for my kids. My five-year-old daughter is my best friend. I talk to them every day, and she’s literally my best friend. She’s my life. That’s why am doing all these crazy things, I want to pay for their college. I just worry so much because things today is so expensive.