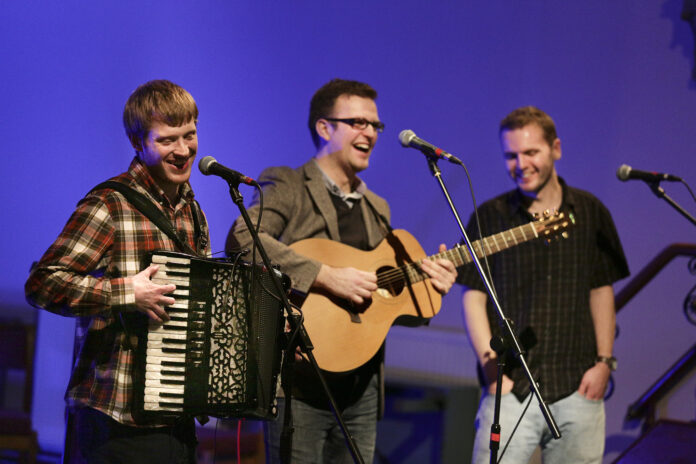 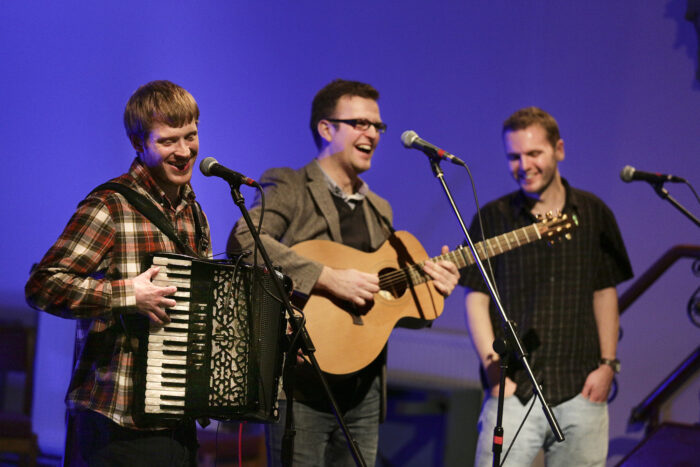 Hot on the heels of their radio 2 Folk Awards triumph (where they won the best group award ahead of such luminaries as Bellowhead, The Furrow Collective (who released our favourite folk album of 2014) and The Gloaming) The Young ‘Uns hooked up with Louder Than War’s Mike Ainscoe for a wide ranging – and illuminating – chat. But first Mike fills us in with a bit of background about the band whose 2014 album we gave 9 / 10 and whose new one we’re about to laud with a very positive review too.

The Young ‘Uns are so named after the time they stumbled into Stockton Folk Club as teenagers and found themselves the youngest ‘folk’ in the room. They also found themselves mesmerised and thoroughly addicted by what they found – so a life changing moment indeed. They are, of course, not to be confused with the wild eyed, big bottomed anarchists from the alt-comedy obsessed eighties, although with a dash of witty banter added to the mix,   primarily from, or at the expense of, David Eagle, they are  closer than you’d imagine to Rik, Vyvyan, Neil and Mike.

From the major stages at Glastonbury and Cambridge Folk Festival to their own residential singing weekends and their passion for “going back to their roots” with local pub singarounds, they share an infectious  passion for singing and laughter wherever they appear.

Fresh with the flush of that folk award triumph, The Young ‘Uns are back on tour with a new album to showcase. David Eagle from the band chats to Mike Ainscoe about what they’ve been up to. 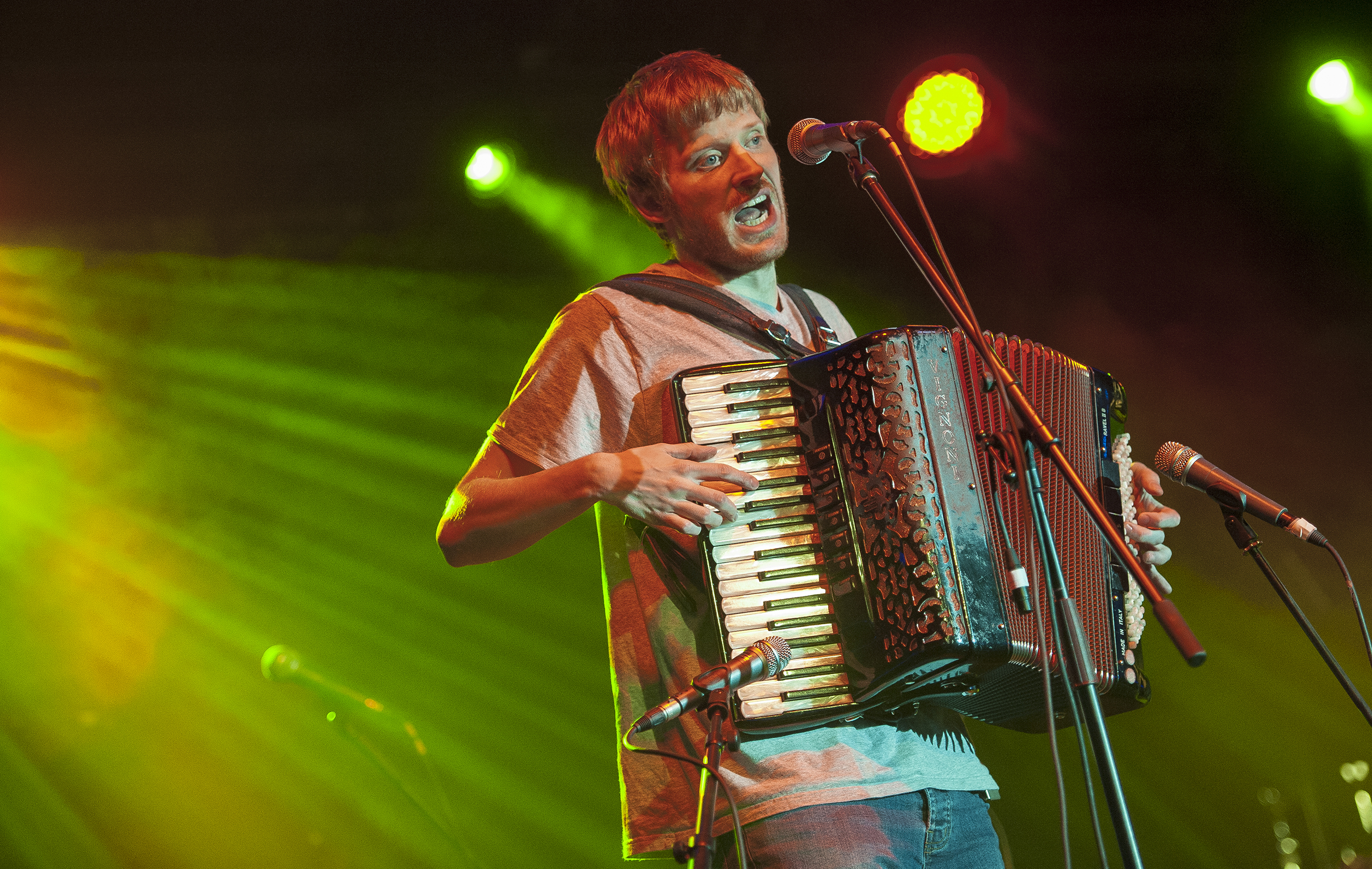 First of all though it was a massive congratulations to the boys with the hot off the press news that they are now officially the 2015 Radio 2 Folk Awards Best Band.

Thanks! It’s crazy to think that twelve years ago we stumbled across the folk scene simply because there happened to be a folk club taking place in the pub that we were in at the time, which we favoured above the other pubs in the town because we’d got away with drinking underage in there. So essentially this award is predicated on the basis of illegal teenage boozing.

We could never have imagined back then that we’d win best group in the BBC Radio 2 Folk Awards. One of the reasons for not being able to imagine this was because we didn’t even know that such a thing existed. We never got into folk music with the intention of it leading us anywhere, but it’s led us on the most fantastically life altering, crazy, beautiful adventure. We’ve met so many amazing people, been to so many incredible places, and enjoyed a whole host of wonderful and enlightening experiences, and it’s all thanks to the accidental discovery of our local folk club.

The tour comes hot on the heels of a support slot on tour with The Unthanks (our review) which was quite an experience in terms of new audiences and venues.

We’ve been good friends with the Unthanks for years, and so it was great to go on tour with them. We only tended to play for twenty to thirty minutes a night, which are quite short sets for us, although strangely, we sold more CDs at these gigs than we normally do when we perform for a full ninety minutes. So the formula seems to be that the less time we’re on stage, the more CDs we sell. I’m not sure if that’s a particularly reassuring concept for our egos, but on the plus side it means we do less work every night, and have more time to spend enjoying the finer things in life, such as the Jeremy Kyle show. Or maybe it’s just that the Unthanks fans are a bit more well off than the riffraff that we tend to attract at our gigs.

We performed some amazing venues with the Unthanks, including the Roundhouse in London, and we also got to perform in Ireland and Northern Ireland, which we’ve never done before. We’ve only just started our own tour, and already we’ve had loads of new fans come to our gigs because they saw us supporting the Unthanks. I think they were quite disappointed with it all after the first thirty minutes. Some of them threw their CDs back at us.

The new album has come round quite quickly after ‘Never Forget’ – does it find you in rich vein of form in terms of writing / recording?

I think it’s more a case of us being greedy capitalist scum, churning out album after album in order to rake it in. But, in addition to that, we’ve written a few songs about recent events, such as the filming of the controversial “reality” TV show Benefits Street in Stockton. We feel that these subjects need to be addressed, and it’s important to sing these songs and get them out there as soon as we can, while they are at their most relevant to people. That’s a key ethos of folk I think.

Regarding the new album, a lot of songs are again unaccompanied – are you quite happy with that and without feeling you have to overlay them too much with musical arrangement?

When we stumbled across the Stockton folk club as teenagers twelve years ago, we were completely blown away by the fact that ordinary people came together of an evening to sing collectively and unaccompanied, without the need for instruments, singing in their own accents about subjects we’d never heard people sing about before, such as our local area and historical events. When you sing unaccompanied, there is nothing between you and the song. There are no instruments to hide behind, and so I think the message of the song really comes across to the listener. It’s so easy to crowd out the message of the song with instruments, and people start getting distracted by those instruments, and start tapping their steering wheels to the rhythm or humming or whistling along to the melody. I think unaccompanied singing has a lot of power to it. There is a nakedness to it, an intimacy that it engenders. 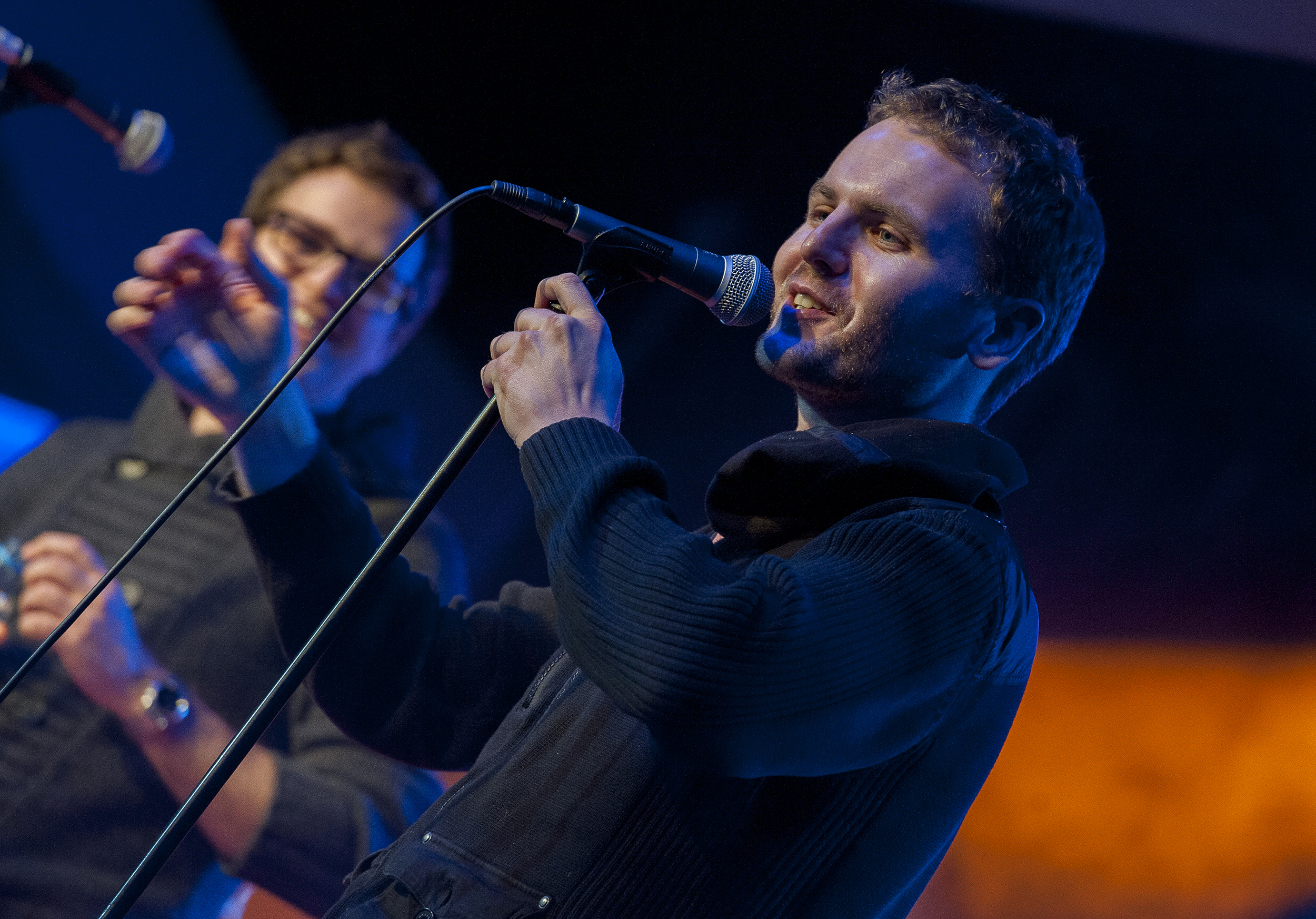 Sean (Cooney) has come up with a couple of ‘war’ themed songs on this record – was that  the impact of the 2014 Great War centenary playing a part?

We’ve done lots of work in schools over the last year about World War I, writing and singing songs with the children. We’ve also been involved in the Songs For the Voiceless project, recording and performing songs about the Great war with other folk artists like Bella Hardy, Josienne Clarke, Gilmore & Roberts, and Jacky Oates. Our song, One December Morn, about the 1914 German bombardment of Hartlepool, was featured on the BBC Radio Ballads last year. So we’ve been doing a lot of research and writing about World War I, and we’ve discovered some really moving stories about the war, including the local tale of Private Hughes, who’s message in a bottle to his wife was discovered eighty-five years after it was thrown into the sea.

You’ve worked with Andy Bell again on this album. He’s the ‘go to’ folk producer at the moment! What does he bring to the table for you guys?

Andy is a good friend and a brilliant producer, so it’s always great working with him. Andy isn’t afraid to make suggestions about how songs should be delivered and recorded. He was very keen that this album should focus principally on our voices and the words, and that the instrumentation, when present, should be stripped down and minimal. I think if we worked with someone else, or self-produced the album, then we’d have maybe introduced more instrumentation, which might have diluted the impact of the songs. For instance, I would play something on the piano, and Andy would stop the recording and suggest that I did the same again only do about ten times less playing, which was a little bit damaging to my ego, but essentially he was going for the less-is-more approach in regards to instrumentation. 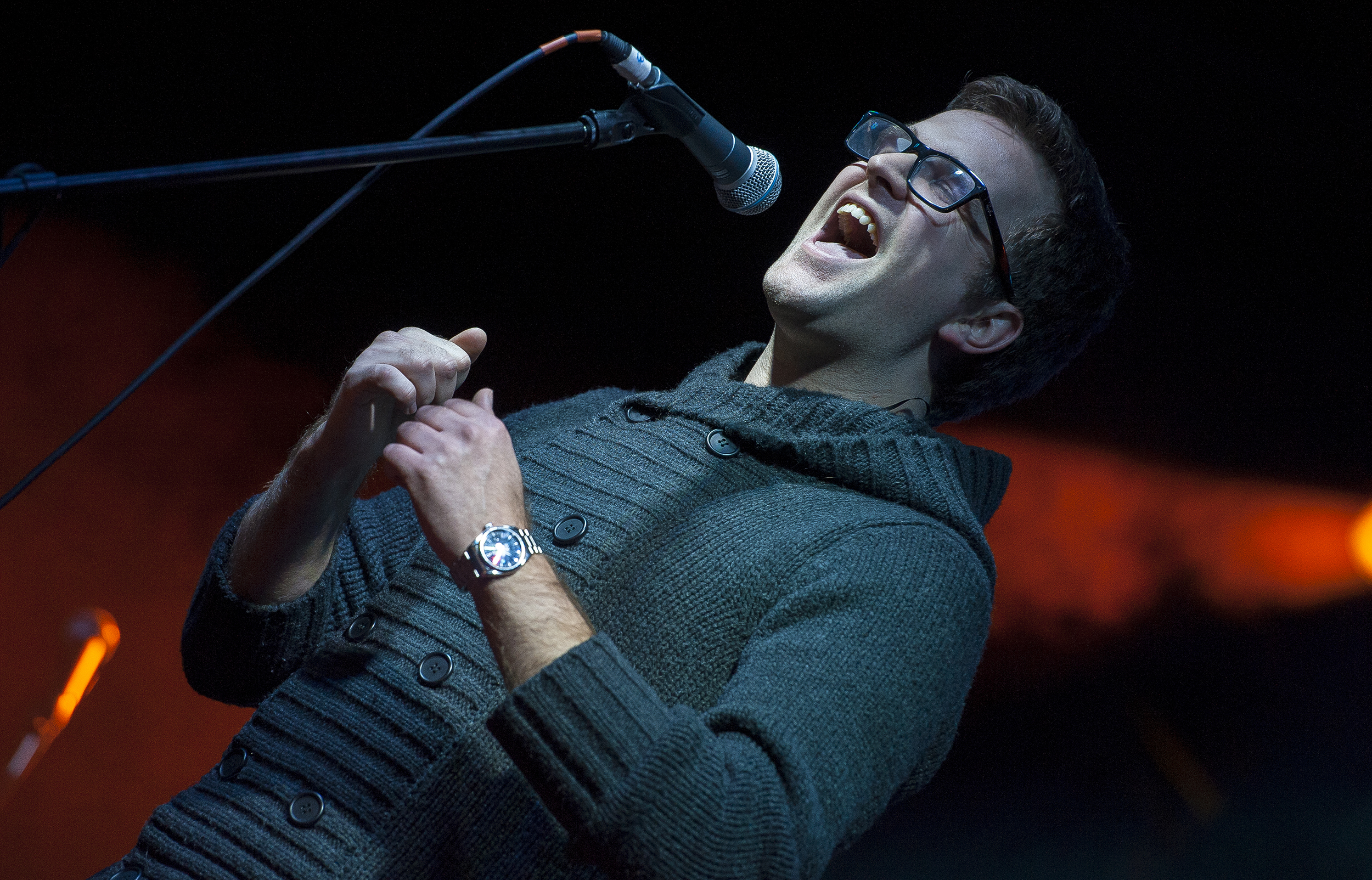 An essential part  of the Young’uns live experience, some may say highlight, is the banter and humour – it always seems unplanned, totally natural and revolves around yourself and some degree of political incorrectness!

One of our major influences on the folk scene is the Wilson Family from Teesside, who, as well as  delivering powerful unaccompanied harmony singing, spend a lot of time between songs chatting to each other and the audience, telling anecdotes and having a laugh. This is something that’s quite common on the folk scene, especially in folk clubs and certainly with a lot of the North East performers like Bob Fox, Jez Lowe and Vin Garbutt. So we sort of learnt from those people.

We do a lot of gigs and meet a lot of people, and so there are always stories to tell about things that happen on tour and the interesting and often eccentric characters we come across on our travels. Telling anecdotes and talking to the audience keeps every gig interesting for us, and it means that we don’t get bored or complacent when we perform.

We produce our own Podcast, which features a lot of the talking bits between the music. Just do a search for Young’uns Podcast on the Internet.

You’ve come  quite a way from the initial steps of community singing into becoming an established band and  doing your own singing weekends. Do you still see the community thing at the root of what folk music is about?

I think a lot of folk performers are still immersed in the folk scene in terms of going to folk clubs, sing-arounds or tunes sessions. Sean and I went to the Sheffield Sessions festival a few weeks ago, which we weren’t performing at, and there were loads of other folk performers in attendance who also weren’t booked to perform but were just there for the craic.

Our singing weekends comprise us booking out a youth hostel for us and fifty other people who’ve fallen under the Young’uns’ evil spell. We sing songs, learn songs, play games, eat and drink, have a laugh, and we also go out into the community and do spontaneous performances. It’s great fun.

What attracted us to folk music was that anyone and everyone was allowed to have a go. If people at the Stockton folk club hadn’t encouraged us to sing when we turned up as clueless, drunken teenagers, then we wouldn’t be doing this today. Community and communal singing is what folk music is about.

You can find The Young’uns  online here: theyounguns.co.uk  They are also on Facebook and tweet as @theyoungunstrio.

All words and photographs by Mike Ainscoe. Live shots from the Great British Folk Festival, December 2014. You can find more of Mike’s writing on Louder Than War at his author’s archive and his website is www.michaelainscoephotography.co.uk