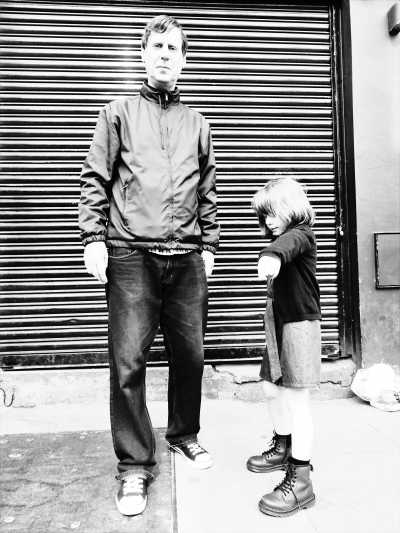 Manchester’s Northern Quarter has changed beyond recognition over the past few decades. Once the blood and guts of Manchester’s seedy underbelly, now it bristles with trendy bars selling overpriced ale to hipsters, students and an assortment of insufferable gobshites (myself included).

Look beyond the outstretched jaws of gentrification and you’ll find Butterfly Music towards the end of Oldham Street. Robert Paul Corless is Butterfly’s in house producer. He is also front man of Gabrielle’s Wish, the Evil Poor and a prolific solo artist (23 LP’s in three years thus far).

For the unanointed, Gabrielle’s Wish are a band of North Manchester miscreants and outsiders who have bucked trends as often as they shunned them. Famously ‘too Clayton for cool’, they were signed and dined by the late, great Rob Gretton (Factory Records/Manager of Joy Division & New Order) whom Corless remembers fondly:

‘Rob signed us, suggested a few things but that got fucked off ‘cos we wanted to do what we wanted to do. Rob’s looking after one of the biggest bands in the world but we’ve still gotta do our own thing (laughs). He sat back in his chair and went ‘ok twats you carry on’, but the full support was always there.

We sort of caught the last bit of being young and being in a group and being signed. At that time we were young, daft as fucking brushes and enjoying ourselves. And we felt we were on fucking fire. We had all the elements together.’

Together those elements created a unique alchemy, leading to a string of acclaimed recordings and a well-earned reputation for intense and incendiary live performances.

Once a regular fixture on the live circuit, the band now play less frequently, preferring to cultivate their extensive back catalogue. The good news is that a new album and, hopefully some live appearances, are not far off:

‘I’ve been asked to do some shows and I’ve said no but…come the New Year we shall see.

We’re recording a new album but it’s still early doors at the moment. Hopefully by the New Year it’ll be out. We’ve got sixteen songs down so far.

Darren and Steven turned up with a load of tracks and left me to it so I’ve been left holding the baby. When I’ve got a couple of hours I’ll do some vocals. I’ve got to find my right space.’

Part of the process for finding the right space sees Corless leave the studio on long walks to find inspiration and allow ideas to germinate:

‘It’s the only time I could not have any distractions or Devils knocking on my door. I like wandering…it’s a release for me. I wander round the streets in the Northern Quarter and misery just sort of creeps its way in. Through my pumps, up my legs, through my jeans and then into my soul and my heart. It’s just bleak and I pick up on that.

I love going walking. Especially when I get visual context then I try to put that into my music. The magic thing about it is I don’t really know what it’s about. When it’s good, it’s gone. It’s been given away’.

Much of Corless’ solo recordings make use of the sounds around him, albeit deconstructed and warped. Soundscapes tempered and sculpted into something unique:

‘I feel like I’ve got a big fuck off orchestra going off in my head whether it’s the wind or the rain or instruments. It just somehow forms.

Of recent I’ve been spending a bit of time in Sothern Spain and North Africa as well.

I’ve been taking microphones and getting ideas – I’ll go and stand on a corner and do field recordings and I’ll come back and use bits and bobs and fuck it all up; reverse it, put it through two amps. Bastardise it all together. Something comes out of it cos I’m not very precious about anything apart from my breath so I’m just trying to keep hold of that at the moment.’

It’s rare to hear a producer dismiss the mystique around the supposed ‘right way’ to record, especially as so many studios are being usurped in favour of inexpensive home recording. But musical snobbery is a notion that seems anathema to Corless:

‘Over many years I’ve started using digital tech, because I grew up with tapes. Technology is here to be used. Yes it has its limitations. Digitised music rather than magnetic tape – there is a difference but can I afford a tape machine? Can I fuck?

I hear these conversations – ‘It’s the age of the amateur’ – but so what. All good shit will find its way to the top of the shitheap.

If there’s someone creating whether it’s good; bad; indifferent; shit; left; right; centre; whatever the fuck it is – its fine with me. As long as they’re not stealing anybody’s soul then it’s fine with me. Cos there’s vampires everywhere and I don’t want to work with them type of people. I want to work with people coming from a genuine type of place. A genuine place…I don’t know where that is but I can sense it. I can see it, I can hear it. I can see the body language. I like working with people who aren’t precious about shit.’

Of the many musicians that he has captured at Butterfly Music, an honourable mention should go to Joshua Ben Joseph who epitomises the ‘genuine’ artist. His songs are mostly finger picked, his lyrics devastating, and his half dozen or so LP’s – criminally underrated. His records have also benefited greatly from sparse production in the studio. That is not to say, favours haven’t been called in from a coterie of accomplished musicians in the Butterfly phone book when further orchestration was called for.

Corless sometimes draws on this revolving door of musicians for his solo work too, utilising the talents of the many people he’s worked with through the years to add musical flourishes to his work. As previously mentioned, he has released 23 albums in a very short period, with much of his solo work instrumental. Although he often showcases poets alongside his music too.

The difference between his solo work and Gabrielle’s Wish output is stark, not least because of the cerebral quality of his vocals when fronting the latter group:

‘Regarding writing lyrics I more or less write as I go. It won’t fuse together until I’m in the studio with a pen in my hand and a microphone in front of me.

It’s just a stream of consciousness and I don’t really want to know where it’s from to be honest. I don’t want to delve too deep into the heart of darkness really. I check myself when I’m beginning to slip and by check myself it usually means going to the Castle.’

Butterfly Music is dangerously close to two pubs – Gullivers and the Castle on Oldham Street. As such, it can be an occupational hazard to pass by without being caught in a tractor beam that pulls you in and keeps you there until your wage and/or soul is spent. They’re also some of the few places in the NQ hinterlands that still cater to the old regulars as much as the new:

‘I’ve been boozing in the Castle since I was 17. I used to go in the back and watch the blues bands. There’d be a drummer there and an organ player. We all know about the Friday club yeah? It’s when everybody got paid. You’d go in that back room and couldn’t see cos of the smoke. The drummer would have a Benson and Hedges hanging out of his mouth. The Castle always fascinated me.

The landlady Cath was a good lady. An amazing woman and she didn’t miss a fucking trick. I built up a great relationship I loved her dearly and she loved me back said to her one day and said I’ve got a group can we play?’

It’s hard to imagine a period when Manchester wasn’t teeming with venues and promoters desperate to fill a line-up without paying much heed to quality control. And yet, in the early days of Gabrielle’s Wish, the Castle offered a lifeline when the jump from Clayton Working Men’s Clubs to the town centre seemed remote:

‘When we first started out cos we didn’t know anyone in Manchester on the scene it was hard to get concerts. Darren the bass player constantly went round with a tape and still couldn’t get ‘owt.

Manchester musicians can often fall prey to the trappings of the city’s musical history and expectations. A heady mix of ego and insecurity can mean that many groups give too much of a shit about what people’s expectations are. Willingly sounding the death knell of creativity. Going through the motions.

Be it through self-imposed exile, bloody-mindedness or a hopeless knack for self-promotion, Gabrielle’s Wish have managed to forge a singular voice that is their own. Corless himself embodies an attitude that is as rare as an affordable pint in the town centre, a notion he attributes to not taking music too seriously;

‘It does overtake some people. When you know something’s being lost…I try to move away from that.’

Whether this means going on a wander or having a drink in the Castle you can bet it won’t be long till he returns to the control room of Butterfly Music to capture the sonic atmosphere that’s just been imbibed.

So next time you venture through the Northern Quarter, try straining through the craft beer goggles for a change.

You may even hear ‘the heart of darkness.’ Resolutely – still beating.