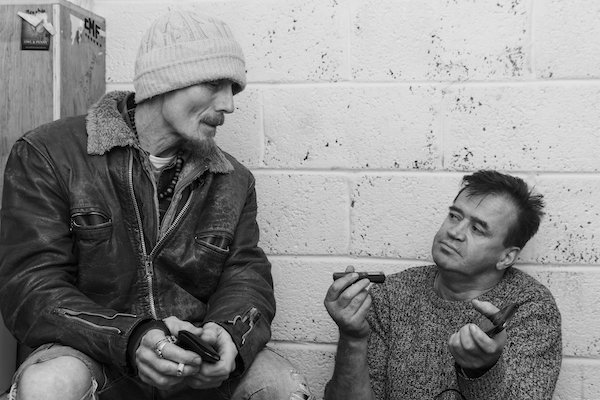 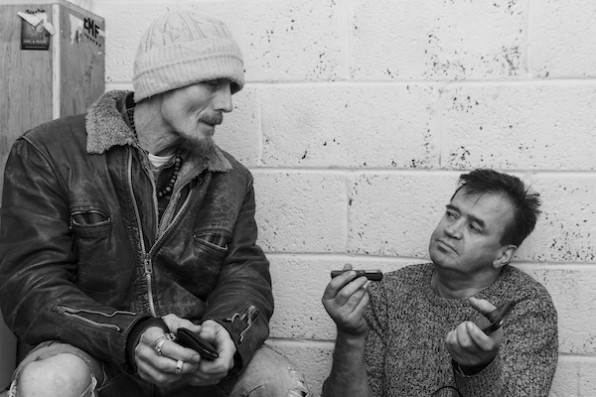 Harry Mulligan went to check out Stereo MCs live in Edinburgh just before Christmas, as documented in his review. Right after the the gig he went back stage to catch up with Rob Birch, who we also spoke to back in July, to find out what he’d been up to since then and what plans he and the band have for 2015.

After the show, the Stereo MC’s Dressing Room is full of noisy chatter and we take up occupancy in The Liquid Rooms backstage toilet. For me, our conversation is enlightening to say the least. Find out why after the break.

Louder Than War: How are the joys of Fatherhood treating you?

Rob Birch: Fatherhood is a beautiful thing! I love my children… My boy is seventeen and my daughter is going to be sixteen in February.

Do you mind if I ask you their names?

Do you have any tricks for making the old and the new material more congruent, or seamless?

It’s seamless anyway. I don’t think about it. I don’t think seamless matters. If it’s rough and its got a Vibe… You know, the most important thing is that music has a Vibe. If it’s got a Vibe, people will feel it! You get too preoccupied with technicality – you’re gonna lose the Vibe!

What kind of changes have you guys made to the live show, and has it improved the Stereo MC’s or have the changes been made out of economic necessity?

We got more electronic drums because we think they sound better, and I got an Echo Unit on my voice because I can Dub myself out, its more interesting, exciting. So, if you got more money, you can spend more money on your LIVE show, but we try to look at things in terms of what we can do, you know… Hands on sort of thing. That’s the important thing, that you do things yourself. We don’t want run some show that’s theatrical and pre-worked out and pre-conceived. It’s got to be LIVE, so there’s an element of Jamming to it.

Do you prefer touring with a full back-line or do you prefer it stripped back the way it is now?

Well it’s not stripped back. This is the way it’s always been! When we started and it was just two DJ’s and me on the Mic. So really, this is a full band.

As everyone has ventured more into MIDI (Multiple Interface Digital Input), or Analogue and MIDI, combined, what changes have you made to work you do in the studio, and what advice would you give to younger grassroots performers, straddling both these domains in Dance music and music in general?

Well, I don’t know what advice I’d give to anybody. I think you got to follow your Heart. You got to follow your heart and do what excites you! That’s the important thing. If you need advice, you’re probably in the wrong Business. That’s what I think! Obviously, from when we started, things have changed many times over. You just got to keep learning new methods.

As the first UK group to break the US Charts with a Hip Hop tune, what do you think of young hip hop artists and rappers singing with their local vernacular and accent?

I think you should speak how you normally do… how you feel right speaking. You have to invent yourself on the Microphone. When your on the Mic, you do what you want to do, be who you want to be. It’s not a matter of doing what you think you’re supposed to do. Do you know what I mean? I don’t think you should feel like you ought to do anything. If it sounds good, and you’re getting an energy about it. That’s all that matters really. I can’t really see any point in doing anything that is alien to yourself. If you don’t know it and feel it, how can you do it? What’s the point in being American, when you’re not American?

Have you heard Young Fathers?

What did you think of them?

Well I think they’re a very interesting group. I like what they do. They’re definitely on the verge of something that incorporates a lot of different vibes, different sorts of music
.
What’s the festival scene like on the Continent compared to here in Britain?

It’s very commercial here. So the Festivals are huge and a bit of a Rat Race. It’s alright though. On the Continent, you get a lot of quite nice smaller Festivals and the people that run it I a manner which is really more personal and not so commercial or money based. You know, people want to make money, but, it’s not so devoted to being a money machine. Also, you get a different feeling from the audience. It reminds me of a spoiled child who gets given lots of toys. You are going to get a ‘Cry’ if you take them away, ha! Whereas, on the Continent, they’re going to go wild for a toy, because they want to play with it. But here, everybody’s got a toy to play with. So there, everybody’s more likely to say: ‘Yeah, I’m going to get down tonight!’ Well, that’s how it feels to me.

Did you have fun with Shaun Ryder and The Happy Mondays on this last Tour? Do you want to share any amusing anecdotes from your jaunt with them?

They are a great bunch of people to work with. Whenever you share a stage with The Happy Mondays, you know its going to be a good night! Everything else, what the place is going to talk about is whatever… They’re a good bunch of people, and we’re all professional. We go out there and we Rock crowds. It’s what we want to do Harry. Everything else is irrelevant to me. You know, I haven’t really got any funny anecdotes. We’re all out there to perform. And they’re good people
.
How do you manage to decompress after ten albums and a relentless touring schedule?

I don’t know, I haven’t done that in a long time, haha… Usually, if you go, ‘Ah, I got a few weeks off!’, you end up getting ill, and your body releases all its tension. You end up spending your holiday feeling rubbish. It’s like your body finally expresses all its problems, and you suddenly go ‘Oh Shit!’ and you’re spending all your holiday in bed. But that’s right, I’m grateful for what I do… and you find a bottle and go outside… ha ha ha…

More touring, more new music and more energy… more movement, more new parts. Everybody is going to get out on the Road and make new music. That’s what we want to do – and DJ’ing.

What’s different about when you started and what it’s like now?

Well, most of the Labels are dead. It’s a whole different way of survival. You have to find different ways to survive. I mean the way music is made has changed. I mean it’s like saying: ‘What’s the difference between Elvis Presley and the Sex Pistols? ‘. Do you know what I mean? It’s like everything changes, people’s context, what music sounds like. The sound of music has changed and it changes every ten years. Now it’s like running a little business. A sort of ‘Hardware Shop’, on the internet. You’re trying to get by, put your music out, make some waves, collaborate with some people, and go out and do some shows, and manage yourself! It’s really come down to the individual, whereas before it was about being signed to a Label, and them injecting some money into you. And of-course the way people make music now is totally different. Now you make music at 32,000 feet as your flying across to do a DJ Set, whereas before you’d wait until you got into the studio. So, the whole concept of music is changing. You just have to keep moving, and the older you get, the more you have to move.

Rob, thanks for talking to me!

Yeah, it’s been my pleasure Harry.

All words by Harry Mulligan and photography © Allan Sinclair. More from Harry can be found at his Louder Than War Author Archive.