Not too long ago, I did an album review of the new Pig Iron release, IV. And, low and behold, I was then offered an opportunity to interview the band â¦ or at least Â¼ of them when bassist Hugh Gilmour was gracious enough to answer a few questions by email. Below is what he had to say.

First off, I quickly patted myself on the back when it was revealed to me that I was indeed right when I asked if the band got their name from the old song âRock Island Lineâ, although I thought it was a Johnny Cash song instead of a Leadbelly song…

â…The blues is very important to the band, but the truth is we just liked the name and thought it was a good way to describe the band; heavy, primitive, raw, untreated, unrefined. Or at least those things applied to the bandâs sound when we started in 2001. Itâs definitely NOT a Sabbath derived name. Best ask Electric Wizard about that…â

After patting myself on the back, I felt a little more humble when, after stating that to me Pig Iron sounded like an âAmericanâ band, Hugh came back with a pretty damn good and interesting answer.

âFree made âAmericanâ sounding albums. As did Purple. As did Zeppelin. As did the Stones. How do you define American sounding, and what elements are American sounding? Johnny Ogle, Pig Ironâs vocalist, is Canadian, so perhaps itâs a Canadian sounding album? As with every record, we write songs and make music primarily to please ourselves, and there are no US bands that are a bigger influence on Pig Iron than those bands (plus a bit of Sabbath).â

DAMN! Chris 1-Hugh 1. But he does make an excellent point. In my mind, these guys sound like a southern rock band, along the lines of Drivinâ nâ Cryinâ or the Allman Brothers or the Black Crowes so I associated their sound with the US. But of course, music doesnât exist in a bubble, and these rock and blues sounds have traveled back and forth across the Atlantic, with bands from the UK and from the US (and all kinds of other countries for that matter) influencing each other. Iâm sure it would be hard to find a southern rock band without a Stones album in their collection. In many ways, itâs fair to say that Western popular music has lost all borders.

And now to the nitty gritty: Not being overly familiar with Pig Iron before IV I thought I best ask a few ‘what, where, when, who and whys’. So, when did they start?

âExact dates vary, but there is a 4-track rehearsal recording from 12th July 2001, so the bandâs origins are usually dated to then. We played our first gig in June 2002.â

So this is a band that has been around for a while, with only a few lineup changes over the years. Original guitarists Dave Pattenden played with the band until 2010. Now, apparently, he lives in Canada. Living in Canada myself he could be my neighbour for all I know. Iâll keep an eye out for him. Ben Ash played on and off with the band until 2010. Nowadays, Dan Edwards is doing a bang up job on guitar (as I talked about in my album review) and doing some song writing as well.

With their new album, Pig Iron find themselves on a new record label, Hear No Evil Recordings, an imprint of Cherry Red Records devoted entirely to hard rock and metal.

âTo date, all Pig Iron releases had been issued via Sounds Of Caligula recordings. The opportunity to start a new label (Hear No Evil) came about with Cherry Red earlier this year (2012), and it all went with there. Sounds Of Caligula ran on a completely self-funded, independent basis, but thereâs a limit to how much you can achieve alone. Cherry Red have a very good team and infrastructure that benefits Pig Iron and Hear No Evil 100%.â

So, the future looks bright on the recording side. And by the sounds of things, theyâve done some pretty good size festivals and shows, opening up for Iron Maiden in 2005, and playing festivals like Hard Rock Hell, and apparently in front of 10,000 Hellâs Angels at the Bulldog Bash Festival. That gig intrigued me. So, how was that?? Anything crazy happen?

âWeâre very English, so donât really discuss that much outside of the band, but that was a pretty crazy weekend; playing electric to the Angels on the Friday afternoon with Status Quo, then acoustic at Bloodstock Open Air with Exodus on the Sunday afternoon of the same weekend. Contrary to popular belief weâve never trashed a hotel room. Weâre more likely to tidy them.â

Check out Pig Ironâs webpage or âlikeâ them on Facebook.

Interview by Chris Hearn. More writing by Chris on Louder Than War can be found here. 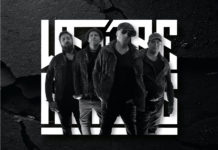 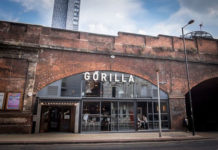 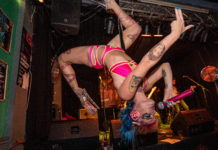 September 24, 2012
We use cookies to ensure that we give you the best experience on our website. If you continue to use this site we will assume that you are happy with it.Ok