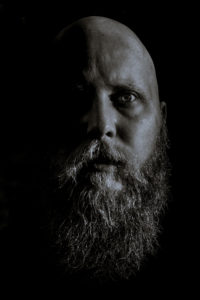 Interview with Petter Nilsson from ORO

Louder Than War recently reviewed Swedish metal band ORO’s debut album Djupets Kall, describing it as “an atmospheric and complex masterpiece of metal”. To explore the elements that went into creating the album, and learn more about the band that created such evocative and unsettling music, Gareth Allen put some questions for Louder Than War to guitarist and vocalist Petter Nilsson. During the interview Petter indicated that the band would love to play the UK if someone will book them. If any promoter is reading this, please consider putting this great band in front of audiences in the UK.

Louder Than War (LTW): In our review of Djupets Kall, we referred to the album’s imaginative musical soundscapes, and the power and atmosphere of the surrounding landscape where it was recorded. What were for you the experiences in the moment, that impacted on the recording sessions, and we hear in the music on the album?

Petter Nilsson: For me there’s not a single moment that has influenced the sound of the album, but of course layers of experiences, from real life and from imagination. When I think about the sound that we wanted to create with the songs and the album, I envision the blue shimmering mountains and deep forests that surround us. Our music is heavy and primal, as the massive rock, and yet fair and gentle as the wind through the trees. Whenever I walk through these woods, I get a sense of the thundering stillness and the untamed power that it holds. It’s an amazing sensation.

LTW: With each song on the album, there seem to be multiple musical layers, both instrumentally and vocally. How did the compositional process work?

Petter: The songs generally start with me sitting at home with my guitar. I record ideas and riffs on my phone that I then present to the other guys in our rehearsal room. We then start to add all the layers, bass, drums, melody, etc. to the parts, and piece them together. We try out different ways to approach the songs and everybody gets to have a say in the creative process. If someone has an idea for a drumbeat or a new way to arrange the song, we try it out and see how it feels. Then slowly but surely the songs take shape. The vocal parts are the last thing that we add. I sit at home, listening to rough recordings of the songs on my headphones and write down the lyrics. Even though I generally have a rough idea on how I want the vocals to be, it’s not until that moment when I’m alone with just my thoughts and the music, that it really takes form.

LTW: On the song Tusen Kroppar from the album, your vocals seem to almost scream with pain. What are the experiences/observations, the song is seeking to express?

Petter: I wrote the acoustic intro for this song many years ago and recorded it on my phone. And when I listened to it afterwards, I heard my newborn daughter crying in the background, which I hadn’t noticed during the recording. Her crying and the acoustic guitar made it sound creepy as hell, and I knew we had to use this somehow. The title means “thousand bodies” and I wrote the lyrics during the worst refugee catastrophe around the Mediterranean Sea. Seeing all those people risking their lives and the bodies of dead children floating ashore on the Greek beaches affected me deeply.

LTW: The artwork for the Djupets Kall album is very evocative, what was the concept behind it?

Petter: As a band we’ve always dwelled in the murky, gloomy aspects of what it means to be alive, and for our debut album we wanted to capture the feeling of being drawn to the deepest, darkest places, both mentally and physically. Hence the album title “Djupets kall” (The call from the deep). We found this very talented illustrator via facebook called Jonathan Bark, and we started to discuss the artwork with him. We went through tons of existing artworks of albums and bands we love, to find the right look and feel that we wanted for our cover. We knew from the start that we wanted something that looked hand drawn and painted, not too photo realistic and digital. And Jonathan was the perfect guy to deliver that! He made about a hundred different sketches for us to consider and after a lot of work and tweaks perfection was achieved.

I’m very happy about how it turned out. The idea is this humanoid creature who has been drawn to a cave deep inside the earth, far from sunlight. Not against his will, but not entirely voluntary either. The impenetrable darkness calls upon him and demands his submission, and as he surrenders to its will, staring into the black stream, it consumes and dissolves him with a bitter sweet satisfaction. That is the feeling we want to awaken in the innermost essence of the listener.

LTW: Could you share something about the musical background of each band member?

Petter: Well, my musical background is a bit diverse in the metal genre. I grew up listening to Guns N’ Roses and Metallica, moving on to Slayer and Pantera. For a long time, I was into thrash and death metal, playing guitar in the extreme thrash band Terrorama. But I’ve also really enjoyed listening to progressive stuff like Dream Theater, and other bands like that.

It’s hard for me to answer for the other guys but I’ll give it a try. John Stöök (drums) has a background as the drummer of the stoner rock band called Maskin. But he is also really into modern thrash and progressive stuff like Lamb of God and Periphery. Sebastian Conde (bass) has a background listening to black metal like Mayhem and Marduk, and also playing crust/grind punk. Sebastian Andersson (guitar) has a background in the skate punk and hardcore scene. He’s been playing in a lot of different bands within the hardcore and grindcore genre.

LTW: What does metal music mean to you as a band?

Petter: I think metal music means everything for us as a band (and for me personally). Metal music is the essence that connects us, without it we wouldn’t exist. It’s like asking what oxygen mean to humans.

LTW: Do you have any plans to play the music live and might that include concerts in the UK?

Petter: So far, the only gig we have planned is the release party for the album, taking place in our hometown. After that we’ll see what happens. We’d love to come to the UK and play for sure. If you book us we will come, haha!

LTW: Thank you for your time, it’s really appreciated.

Petter: Thank you, no problem!

You can find ORO online here. They are also on Facebook.

All questions by Gareth Allen.