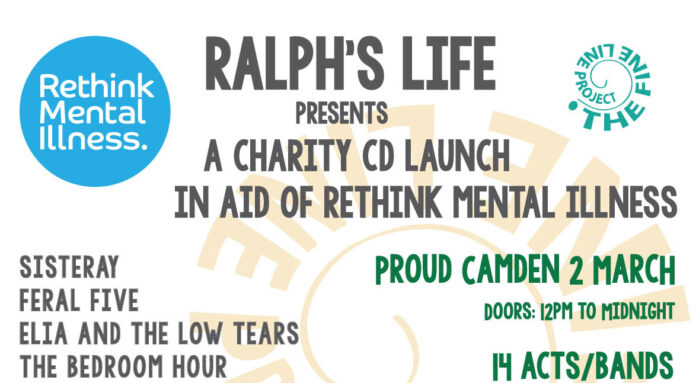 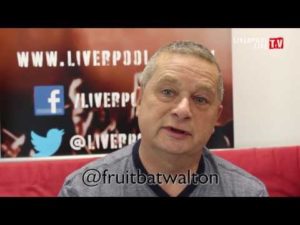 We recently gave the Ralphs Life compilation album in aid of the Rethink Mental Illness charity a very worthy 10/10 on Louder Than War.

Our man Paul Scott-Bates recently caught up with Mike Lindley, the man behind the idea, and asked him few questions.

Fruitbatwalton – what’s in a name?

Long story. Going back to when I wrote a comic Agony Aunt column, Fruitbat Walton was a very confused 14 year old boy who was in love with a Canadian Ice Hockey player and seeking advice and solace (an every-day story).

The cd is a huge success already. Did you ever feel that it wouldn’t happen?

With two days to go and over £2,000 to raise on the Crowdfunder with only the power of Twitter to do it, definitely!
However almost 48 hours of straight Tweeting on my part and the generosity of the people who follow Ralph on Twitter won the day! We made the Crowdfunder target with 20 minutes to spare with Mission Impossible music waiting in the wings.

You have some big names on the cd like Tom Robinson, Helen McCookerybook. How easy was it to attract artists to contribute tracks?

Amazingly easy. Both Tom and Helen were most gracious. That being said the majority of the artists on the CD’s are unsigned and they were amazing in their support and willingness to contribute.

And, were there people who refused?

Only one, who shall remain nameless as there’s no fun in naming and shaming which I wouldn’t love and it would be criminal – but that was only due to management and not the band.

There’s a real sense of community with artists on the cd. The either know someone, or get to know someone.

It’s been great as most already knew each other and if they didn’t, have since interacted at some point on Twitter, and that helped when it came to putting together the Camden Launch Party. Also a number of the artists have had some kind of experience with mental health issues either personally or through family and friends. It’s been a very – cue overused but apt X Factor type expression – ‘humbling experience’ putting the CD together.

Will there be a second cd?

There will indeed. I had more than enough offers of tracks from the Ralph’s Life Double CD to make another. This time for the music therapy charity Nordoff Robbins in Scotland.

I’m coming for tea, what are you making? What will Ralph be having?

I’ll make you my famous Almond Raisin Cake with Madeira. Ralph will of course will be having Bonio. 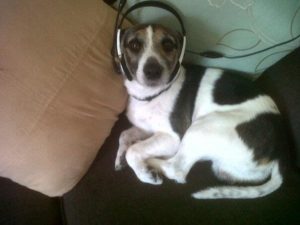 For anyone that was insane enough not to have already ordered the cd, where can they get it?

They can get it from my Blog (click here) however I’m hoping to get it into some Indie Record Shops soon. It’s amazing value for money, and free delivery if purchased online, at £12 for 40 tracks which were mastered free of charge by Dave Maughan.

A Liverpool supporter? How very dare you! Cowdenbeath forever! However, King Kenny every time both as a player and a manager.

As Fruitbatwalton you’re a well-respected blogger. Does the future of unsigned bands lie in online blogs?

Given the number of unsigned bands out there; whether good, bad or indifferent, the online blogs are invaluable when it comes to getting noticed, even on mine!

We’re in an age where bands don’t really need record Companies. Is this a sign of the Industry imploding?

Difficult one, but whilst teenage girls buy the likes of Justin Beaver, the mainstream record companies will always survive.

Twitter, without exception. It’s a massive method of communication and promotion and where else could a Jack Russell hold so much sway!

You’ve already held the cd launch at a live show in Camden featuring many of the artists. Tell me about the day.

First of all I can’t thank the people who came on the day and gave of their time without thought or charge. There are far too many highlights to mention, however, Snippet (Johnno Casson) kicked it off in his inimitable and unforgettable style. Debs McCoy was sublime followed by a debut performance by producer/DJ Ambrose Chappel, who we were very proud to be able to have given him his breakthrough performance, and the established and most excellent Mono Life got people up and making some moves. Twin Hidden were eccentric and entertaining whilst Ded Rabbit were both mesmerizing and manic. We had two Scottish Alternative Music Award winners performing in Plum (Best Electroninc 2013 and first ever female winner) plus Culann (Best Alt/Rock 2013 for whom this was their first ever performance outside Scotland) who were both loud and impressive…they’re gonna be huge. Two St Helens bands came down for the event and both Stillia (who recently signed for a London record company) and Titors Insignia were immense. Elia and The Low Tears got everyone moving and Feral Five closed the show making Ralph’s day by dedicating their cover of the Grace Jones track Warm Leatherette to him – the highlight of any music bloggers day I would think. (winks) 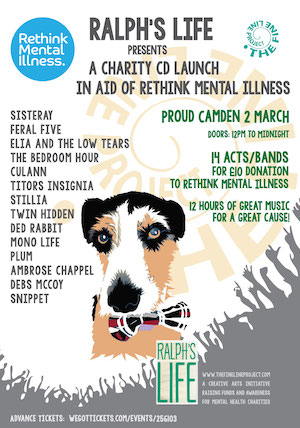 Are there plans for other dates?

Ralph’s just announced an Edinburgh gig in Electric Circus on April 30th headlined by Steve Heron who’s on the CD accompanied by King Eider and The Universal Thee. A Manchester gig will be announced soon too.

How much have you raised for Rethink to date?

We presented a cheque for £2,500 to Rethink at Camden, with more to follow as CD sales increase and the other gigs take place.

What do you hope you’ve achieved?

Well the money is all well and good but for me the main focus was raising awareness of mental health issues, a cause very close to my heart through personal experience.

Rethink Mental Illness is a charity that believes a better life is possible for millions of people affected by mental illness. Forty years ago, one man bravely spoke about his family’s experiences of mental illness in a letter to the Times and in the process brought together hundreds to talk about their experiences of mental illness and support each other. Today Rethink directly supports almost 60,000 people every year across England to get through crises, to live independently and to realise they are not alone. The charity’s website and helplines give information and advice to 500,000 more and changes policy and attitudes for millions. Rethink’s services, support groups, and members cover every county in England, giving them local insight and helping to spread innovations nationally. All their work is governed by people who have lived through mental illness.