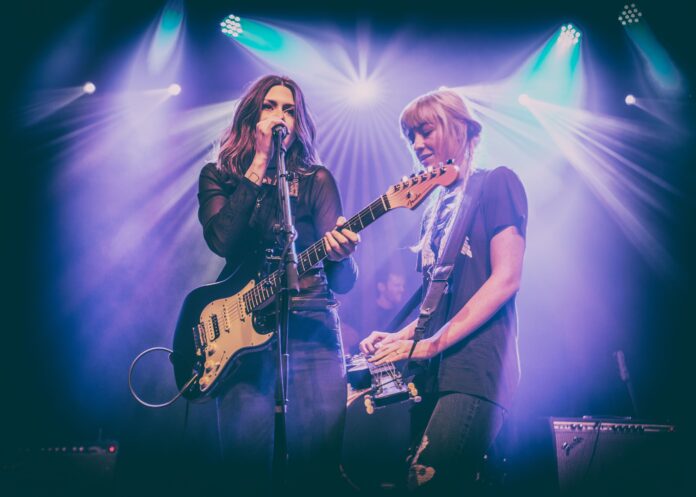 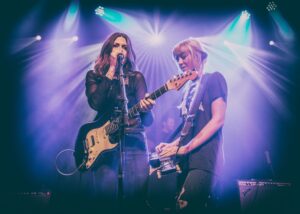 Despite the blues acquiring an image as retro music by and for men of a certain age (and beard), it was women like Sister Rosetta Tharpe and Memphis Minnie who pioneered the blues guitar. Almost a century later Larkin Poe are following in their footsteps today. With their rootsy approach and electrifying live performances, marked by Rebecca’s raunchy vocals and Megan’s searing slide guitar solos, they fly the flag for women in the blues today.

Larkin Poe hail from Atlanta and now live in Nashville. They have released five studio albums since forming in 2010, and spent much of lockdown posting cover versions recorded at home on YouTube. By contrast, Nu Deco Ensemble, formed in Miami five years later, fuse innovative, genre-bending orchestral performances and collaborations to redefine what an orchestra can be in the 21st century.

LTW – How have you spent lockdown in Nashville?

Megan – Rebecca and I live less than 10 minutes apart so we saw each other throughout the lockdown. There’s no way we could be separated. We also continued to work during the past year and half. When our tours got cancelled we pivoted into tons of livestreams [like this fiery version of Layla], content creation, and connection with fans online. It was an amazing year in spite of the huge, massive left turn, loss and heartbreak, mostly because our people are the most supportive music lovers ever. They’re incredible.

LTW – How productive was it for your creative partnership to have so much time off the road and at home for the longest time since you formed ten years ago?

Rebecca – Being off the road isn’t all bad! It was really amazing to be able to be home with our husbands and around for holidays and birthdays with family. It’s good to be reminded of the joy back home as well as looking forward to the upcoming tours.

LTW – You’ve a history of collaboration with other musicians (Thom Hell, Blair Dunlop, Elvis Costello, T-Bone Burnett). What is it that attracts you to a particular artist?

Megan – Our history of collaboration has come about very organically and it’s always felt very natural to create something together. Every artist we’ve had the pleasure to perform with possesses incredible creative capacity and we’re always up for learning. It’s all about learning something beautiful from a new musical situation and allowing one’s horizons to be broadened.

LTW – What made you decide to make your first live performances of the album a collaboration rather than a ‘regular’ gig with your band?

Megan – We didn’t go into the gig with Nu Deco Ensemble intending to release the collaboration as a live album. It was intended to be a one-time-only live performance, but when we listened to the rough board mixes, it felt too special to leave behind.

LTW – How did you come to collaborate – and what attracted you to each other?

Jacomo – Our manager at Red Light, Andrew Leib, first brought them to our attention and Sam and I were immediately transfixed, much like so many of their fans are! The authenticity, blues-rock background, soaring vocals and Megan’s unique virtuosity of the lap steel guitar made it such an intriguing proposition to collaborate with.

LTW: This collaboration with Nu Deco Ensemble really seems to have brought a new dimension to the rootsy sound of Larkin Poe. Was that the plan?

Rebecca – We love the way these songs evolved and feel grateful to Nu Deco for giving us a bit of a creative jolt. The push and pull of the orchestral rhythmic groove certainly changed the way we approached our musical additions. Touring as a roots rock ‘n’ roll outfit, I don’t think we were fully prepared for the emotional release of hearing so many humans playing our music all at the same time. Getting to hear our original songs soaring above the instrumental support of an ensemble was truly one of the most gratifying experiences of our performing career.https://youtu.be/Y5qHC2mJYN0

LTW – Were you already familiar with each other’s work?

Jacomo – At first, to be honest, I personally was not. This style of music really speaks to me, but it was not a world I listened to regularly. However, no matter the style you believe they live in, which is many, I was so drawn in by their craft and thought how magical it could be to elevate their art with an orchestral palette supporting them.

LTW – What attracted you to work together?

Jacomo – That they were such high-level artists and the more we listened, especially to their live performances, we knew this could be a collaboration that would be something very special for their fans as well as ours.

Rebecca – When Nu Deco approached us with the idea of coming together for a livestream during quarantine, we immediately delved into their work and were so impressed by not only their music’s range and depth, but the respect with which they approach other artists’ work. We felt very comfortable with placing our songs into their hands and felt sure they would create a magical space for us all.

LTW – How did you prepare for the performance given the restrictions of lockdown?

Megan – We had several conversations over Zoom and email with (conductor) Jacomo Bairos and (composer/arranger/producer) Sam Hyken to discuss song choices and the basic idea behind the performance. We feel such admiration for Sam’s arrangements and all the parts he wrote for the songs; we basically left him to his own devices and then everything fully came together during rehearsal the day before the concert!

Jacomo – With production value so high these days, Sam and I always look for those stripped-down, live performances of artists to truly know the essence of their work. However, once we know the quality is high from a collaborative perspective, we look toward their output and ask ourselves, which music would truly be elevated by an orchestral palette supporting it.

LTW – Do you plan further collaborations together?

Megan – We’d love to collaborate with Nu Deco again at some point in the future if the right moment presented itself. And if we ever need badass orchestration, we know where to find it!

LTW – Will you be following the album with a live film of the performance?

Megan – No plans yet but you never know. The footage is beautiful.

Jacomo – We would love that! Hey Megan and Rebecca, let’s go on the road!!

LTW – Are you now looking forward to performing these songs as they were originally recorded, with your regular band?

Rebecca – We’ve already been out touring the songs from ‘Self Made Man’ a bit and – I tell ya – they are a blast and a half to play live. There is so much energy and joy behind these songs; they’re made to be shared with a bunch of hootin’ and hollerin’ humans.

LTW – Why do you think there are so few female blues artists today? Especially considering two of the pioneers of electric blues guitar were women – Sister Rosetta Tharpe and Memphis Minnie (and a lot of others of the early part of the 20th century like Ma Rainey, Bessie Smith, Dinah Washington).

Megan – Oh, all the respect in the world for those ladies of the blues! So much strength and raw charisma just coursing through their veins. I think there are a lot of female blues artists carrying the torch now… Susan Tedeschi, Bonnie Raitt, Shemekia Copeland, Ruthie Foster, Samantha Fish, to name a few. Maybe they just don’t get to dominate the public eye. We can always use more representation!

LTW – What thing(s) do you most look forward to doing once we regain our freedom in a meaningful way, without restrictions?

Megan – It will be nice to hug people without worrying about what you might be passing to each other!