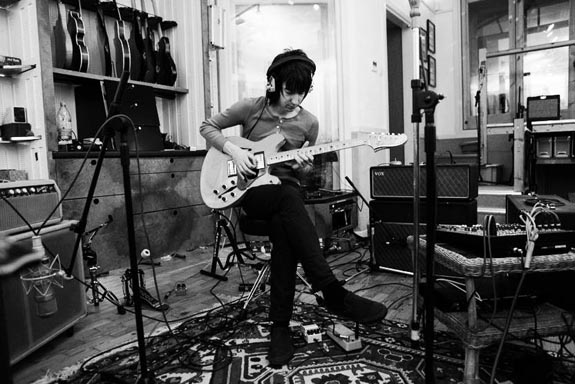 As Jeff Wootton (Gorillaz, Damon Albarn, Eno etc.) puts his new solo album together out in LA Louder Than War were lucky enough to catch up with the Manchester guitarist and song writer to get the lowdown on how it’s going so far.

Jeff Wootton is a much in demand and highly respected musician whose career so far has seen him work on many projects with various legendary artists, groups and producers including Eno, Liam Gallagher and Mick Jones. Recently he’s also been working alongside Damon Albarn in his group ‘Heavy Sea’s’ as well as being one of the artists chosen to go on Albarn’s acclaimed ‘African Express’ tour.

It’s safe to say he’s already achieved and covered so much, but right now it’s all about his own album – recorded between Manchester and California – which he describes himself as ‘sonically driven’. Find out more about it in his own words below.

Louder Than War: Hi Jeff … you’re in the studio right now working on your debut album so firstly I wanted to ask you what it feels like to be working on your own material and with your own ideas after such a fulfilling career playing, touring and contributing on such an array of fantastic albums and projects with a range of equally fantastic artists and groups. Is the material you’re working on right now ideas you’ve been planning over the last several years while you’ve also been working on all those different albums, projects and groups?

Jeff Wootton: Well it’s a great feeling first of all, it’s been a great journey to get to this point and I would not have travelled it any other way. I’ve kept making music aside from being in the bands I’ve been in and it was always in my mind to release a record of my own eventually. We all have a desire to remain eternal on earth and I decided I must do this through my art long before I joined any band. But I wouldn’t say I was holding back, more creating a new sound. I built new sounds for the future on this record, I was pretty hell-bent on doing that and that took some time.

Can you give us an idea about the tunes and overall vibe of the album; I’ve been checking out some of your music on Soundcloud and the ‘Guitar Arkestra’ uploads you put up online, there’s a real blues influence in what you do and you use some stunning effects and sounds, is that maybe a flavor of what the album’s going to sound and feel like?

You’ve been involved in some fantastic projects, albums and tours over the last four years haven’t you, would you say you’ve managed to take some of the experience, inspiration and recording techniques from working with people Damon Albarn, Gorillaz (see video above), Africa Express, Brian Eno … and that you’re using it within your own ideas and material? Do you feel your
own music has benefited from those experiences?

Totally, mostly in the studio. Brian Eno is a great theorist and just listening to him taught me a lot. Some of his theories I implemented in the making of this record. A lot of records he made were not done in conventional studios where the control room is in a separate room to the live room. Having the musician and the engineer in the same room when recording gives such a great feel when working when everyone is huddled together with the engineer. I also experimented a lot with sonic’s like Eno would do, especially on the guitar, I do these guitar loops that are quite unique, there’s a whole song on the album built round one guitar loop called sonik drips, it’s one of the tracks I’m most proud of on there. I also managed to get some of my recording done in Mali.

So who are you working with on the album and can you talk about some of the process involved in making the album? Are there any guest spots on there?

The record was recorded and mixed with Mark Howard and myself in Manchester, England and Topanga, California. We constructed these renegade studio installations in houses with our own gear and would record for a few weeks then take them down. It’s a unique way of recording that is different to most i have worked with, As Mark would say – You don’t fall into the same routines with putting say drums in the same place. I played everything on the record apart from the drums who were done with Mark Heaney who did a magnificent job. Me and Mark Howard would then spend time doing these treatments we call ‘Sonik dubs’ to layer the songs and recordings we made. There are some guest spots on the record but you will have to wait for that, I’m sorry.

When do you think you’ll be ready to release it, are you on the last stages of recording it or is there some way to go yet before release?

Next year’s most likely for release, I’m in the last stages now – some treatments left to do and a guest or two, then send it off for mastering.

On top of producing and recording your debut album you’re still really active with other
projects, like with the recent event you played on with Damon Albarn’s band The Heavy Sea’s who you played with at Manchester’s Victoria Warehouse for BBC radio 6 music festival and you’ve been playing many different gigs with many different groups and artists all over the world. What have been some of the best live moments you’ve experienced?

Well I’ve been lucky enough to have some amazing experiences through music. Gorillaz was something that will stay with me forever. There’s the obvious … headlining Coachella, Glastonbury, Madison square garden etc. etc. etc. were definitely highlights on a grand scale. To be in the first western band to play in Damascus Syria was also something I won’t forget any time soon.

You seem to have a really good working relationship with many artists, you were one of the people chosen by Damon Albarn to go on the Africa Express project travelling and playing through Mali for instance, can you tell us your overall thoughts on that trip and tell us what some of the highlights for you personally were?

Going to Mali with Africa Express definitely taught me so much. From the moment you step off the plane and meet the musicians you’re instantly away from all the bullshit side of the music business – there’s just you and these fantastic musicians and it’s all about the music and feel … they play with great feel over there. It was a heartfelt experience for me jamming away and seeing the people smile, they just want you to enjoy it as much as them – and they want to show what they can do. It can be quite competitive between those guys! But yeah Nick Zinner did a great job with Songhoy Blues – Soubour (see video below), that’s a highlight on the record for me.

…and the album that came out of the Africa Express project, ‘Maison Des Jeunes’ … would you say it’s maybe one of the most unique pieces of work you’ve ever played on?

Yes definitely, unique in the sense of the journey recording it. I should add, as well as the record, which is great, there’s also a piece Andre de Ridder and myself worked on – Terry Riley In C. It’s almost finished now and 40 mins long and was recorded in Bamako. It’s gonna be great!

So looking ahead to the album, can you maybe give us some titles of tracks on the record and the album title itself? And what do you feel are the stand out tracks or your personal favorites so far?

Sure …. Sea Of Sound, Sonik Drips, The Eternal, Ceremony Waltz, So Lonely. The record is a whole
piece from top to bottom really, a journey. I couldn’t pick out one!

Lastly Jeff, what’s the next live date you’ve got planned and could we maybe see you tour your album some time this year?

Well I’m gonna finish this run with Damon and then it’s time to start, I’d say look for a small club launch and some supports, it’ll probably be the end of this year to next though.