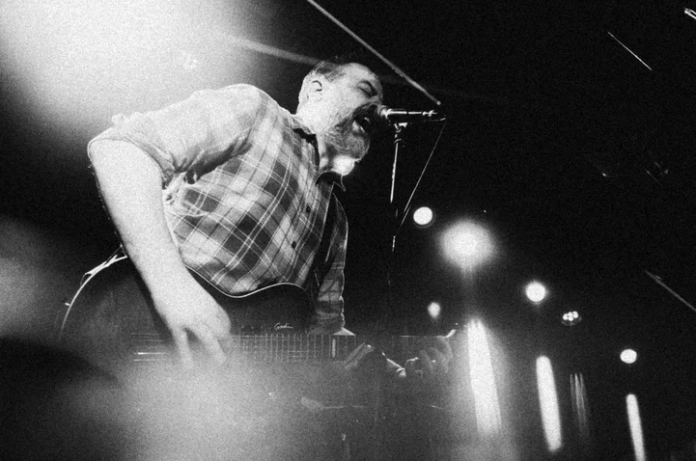 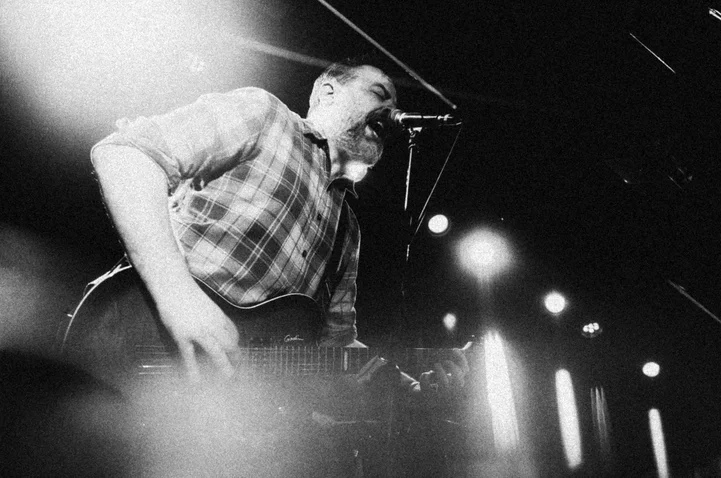 Phenolhouse is one of those bands you’d call a “hidden wonder”. Formed in Moscow by Canadian-born signer and guitarist, Ian Henderson’s Phenolhouse has been playing for seven years already. Certainly, it’s a band that tours constantly. Henderson stresses that, being working people, all their energy goes into rehearsing, recording, and then releasing their music digitally on Bandcamp.

Their newest album, Unheard, Seen, combines a punk-rock mentality with geometric minimalism. Inspired by the early SST Records roster, Phenolhouse takes the energy of punk-rock of that era, constantly experimenting with additional elements – more melodic and dissonant, avant-garde or inspired by country music.

Louder Than War talks to the guitarist and founder of Phenolhouse, Ian Henderson, about his life in Russia, chemistry within the band, ongoing writing process, language and future plans.

LTW: First of all – how did you end up in Russia?

Ian: I first started visiting Russia in the 2000s as a Canadian student. I was studying international relations and Russian was my chosen language component. First, I lived in Tver.  Then I travelled for a while. I had an internship in Moscow and later started working here.

By the time you started Phenolhouse you’d been living in Russia for a few years. How much has this cultural difference and diversity affected you on a creative level?

That’s an interesting question. Perhaps it isn’t so much a cultural difference, as much as the pace of life in Moscow pushing things forwards relatively quickly for us (the pace of life is much faster than Canada). I must say, I have been lucky to find players like Nikita Zubov (drums) and Ivan Garbuz (bass) who are open to diverse ideas. Also, since we are all working people, we are permanently situated in Moscow. This means we aren’t touring new albums or EPs. Rather, once a new work is released, we are already working on brand new ideas.

But if the process is ongoing, how do you usually sort the ideas out ?

I think our process is quite straight forward…I come in with a few riffs or chord progressions that I think work well. Then, we jam it out – fast, slow, how many times per riff, etc. Earlier on, I think it was more conceptual – “I want a song that should sound exactly like this”. But now, we get the basic ideas at practice and I might refine them over a few weeks. As for a ‘vibe’ or ‘mood’, that could come from having new strings on the guitar or practising in a different rehearsal room. While recording, of course, it’s key to find a mood and a groove. Usually that can take a while, like a goldfish getting used to a new bowl. We do try to filter the ideas though and use those we are most enthusiastic about. There’s hours of jams and incomplete songs. 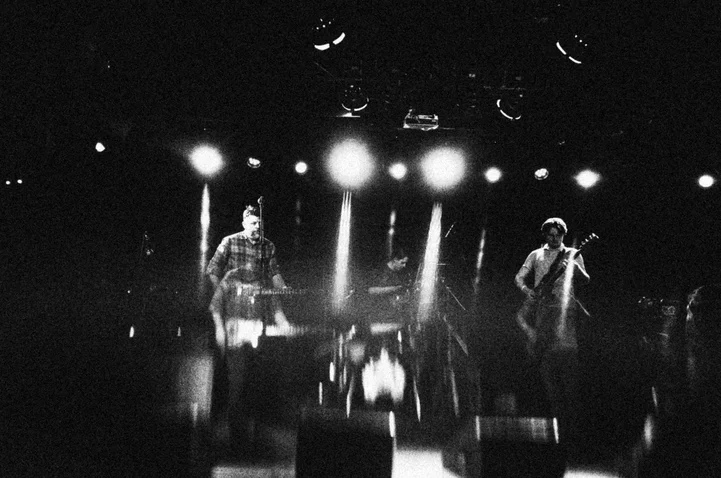 There are quite a few songs on the new record that are focused on repetitive structures, like Song For Rodion. Is it something you want to incorporate into your music or just the place where song leads you to?

Probably both. At the end of the day, my interest is what best suits the song…it could be several different parts or lots of repetition, or both. One thing I really like doing now is repeating parts with variations in dynamics; louder/quieter, chords/individual notes, etc. It opens things up for the rhythm section too, I think.

Your previous self-titled LP came out in May 2020. Then you released Red Eyes Session No.1 and now Unheard, Seen. Having this non-stop sort of process, what usually bring you to a decision that “this will be an LP or an EP”?

Well, The Red Eyes EP was an experiment that we recorded at our rehearsal place where we demoed a bunch of songs I wrote during the Covid-19 quarantine. We took the three best songs and made a quick EP in the old style hardcore sense. Then, we continued for the next while, refining the leftover material or writing new songs. There wasn’t much live activity, so we could focus on writing most of the time.

Being a non-constantly touring band and getting to play live from time to time, do you think it gives you a new perspective on things? In the end, not all songs could get repeated just like they were recorded. But also, sometimes the reaction of the audience affects the way the material is presented.

Well, I would never rule out touring in our future, whether it might be in Russia, Europe or even North America. Playing this stuff to different groups of people at various venues would be a great experience. As far as reinterpreting songs, I think that’s kind of an organic process for us.

Since we record most of the instrumentation live ‘off the floor’ with no click tracks, we don’t box ourselves into a particular way of doing songs. Some songs have evolved in a relatively short period of time. For example, Four Choruses from our last album sounds different every time we perform it, even though it’s repeating the same four chords.

Four Choruses is an interesting one to talk about. It seems to me that within the same degree of inner-band organics, your sound on the previous LP is much more angular and contrasting in comparison with Unheard, Seen.

Yes. I think the new one is bit more ‘traditional’ in a songwriting sense. More actual choruses and hooks. Or simpler arrangements.

What caused this shift ?

I think it’s more or less natural. I can’t speak for Nikita or Vanya, but I feel more comfortable and confident with applying more melodic elements without getting too cliched. 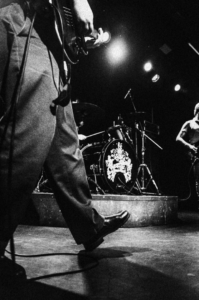 For a lot of hardcore artists it becomes a real task. It took a while for Minutemen to progress from The Punch Line to Double Nickels On The Dime – to find a balance between melody, rhythm and a certain degree of lyricism. In this sense, it would be logical to ask you what language do you use within the band?

We communicate in Russian. The lyrics are in English though. I think the balance is found by trying new things while also being quite democratic if something isn’t working. As for how the band is developing, it comes from getting more used to each person’s individual playing style and rhythms, while also trying to expand and try new things.

What brought the three of you playing together for the first time?

Well, this is the second line up for the band. The first lineup formed loosely in 2014 as a one-off experimental powerviolence-noise thing. We did the first split with Bolo from Petersburg and Zhenya, the first drummer, decided to focus on his other band. So, after a while we found Nikita who had a completely different style and feel, so the music immediately changed. It was also around this time that I was just getting tired of playing through tones of distortion and kinda disillusioned with a lot of extreme music. We shifted styles, made it swifter, jazzier, cleaner and surfier, and clearly under the influence of the early Minutemen LPs. Then Ivan, the first guitarist/bassist, left and Ivan Garbuz joined us in 2016. That’s the lineup and it’s pretty much been phase two of the band since then.

Your lyrical complexity varies from song to song. Literally. How much did this shift to the melodics within Unhead. Seen affect you on a lyrical level?

I think I was trying to figure out some balance for each song, doing the half spoken/quiet yell thing but with more of a pop approach. I was listening to a lot of country from the 50s and 60s (Ernest Tubb, pre-outlaw Waylon Jennings, Buck Owens, etc.), and I think some of those vocal affectations crept in on some songs. 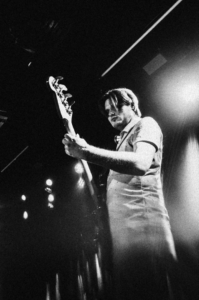 you had as a band at that point ?

Yeah it could be. This is where working with a good sound engineer like Stas Baranov, who’s recorded most of our stuff, can really help. He gets what we are going for, and knows how to coax the right feel when I’m doing the vocals. Obviously, I’m not a trained singer and the vox aren’t to everybody’s taste, so it’s sometimes good to get that intelligence support or guidance.

Stas is somebody who’s been working with you for a while. What do you think, the addition of Colin Marston, who did the mastering for Unheard, Seen brought to the sound of Phenolhouse?

It sounds richer and deeper. Colin worked on my friend’s album, Antediluvian’s Divine Punishment, and he offers bands lots of options to get an optimal sound that fits their vision. And he is extremely professional and has a broad understanding of music.

What we should expect from you?

Probably more music in the near future. Some fast some slow.