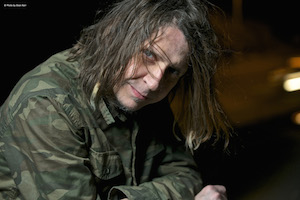 After the tragic summer of 2013 with the loss of drummer Joey LazCaze, New Orland’s legends EYEHATEGOD have taken this year by the horns. With Aaron Hill, as their new drummer and a new album due to be released next month things can only go up from here. I caught up with Mike Williams, the lead vocalist of the band, to get the lowdown on their first record in thirteen years.

Louder Than War: How has 2014 been for EYEHATEGOD so far?

Mike Williams: It’s been great, we’ve done a lot of shows with our new drummer so those have been good obviously, but besides that our new albums coming out in May on a few different record labels. It’s starting out to be a good year! Hopefully we can just keep the momentum up.

It’s been a while since you guys have released an album, have you done anything differently this time, has the recording process changed?

No not at all, it changed from the first album because obviously we know more now. We know more about being in the studio and recording and things like that. The first record we ever did, we just went in and did it live in like one take, and that was it! So the process now is that we record everything separately. We wanted to get a really good sound on this record, we wanted it to be clean, not so much clean because EYEHATEGOD is not clean, we’re a filthy band. I mean I don’t think you could lose that anyway, but no we just did it like we usually do. We went in and knocked it out and ended up having to re-record some stuff but in the end we got to keep Joeys drum track so that was cool.

Which track is your favourite song off the new album?

This is such a good album to me, I’m not even ashamed to say that, because we’ve been working on this thing for such a long time, so I like them all! I like every song on there. However, I would say that ‘Medicine Noose’ is one of my favourites, ‘New Orland’s in the New Vietnam’, that’s not on the album but that is a song that we do live that is a newer song. We’re all very proud of this record, we’re just so glad that it’s finally out there and we can start doing things around it.

Do you feel like your influences have changed over the years?

Not at all, I feel like I’m just perpetually a child, I don’t want to grow up and I don’t think I could if I wanted to. It’s the attitude. There’s things that elicit different emotions that I bring to the song and lyrics. But for the most part the lyrics are very cryptic, so it’s not like the subject matter has changed, it all the same influences from when I was a kid. I’m still really passionate about music.

Did you always know that was what you wanted to do?

I would say probably yes, because I had two brothers and they were vinyl collectors, so I grew up with a house full of music with vinyl everywhere. One of my brothers was sort of a hippy, so would listen to hippy stuff, but my other brother I would look up to as he got me into Alice Cooper, Black Sabbath and things like that. I wanted to be a drummer to begin with, but I just aggravated people. Then I noticed it’d be easier to be the singer, plus I’m in the front too. So it seemed like a fun thing!

Vocalists say when they first started out singing, it was scary as they had nothing to hide behind.

Yeah that’s true in the early, early days of first playing live, you do feel awkward at times, but I would always mask that by throwing a bottle at someone or falling down a flight of stairs or something. But as they get older you get used to it!

It really is, I could be completely blacked out drunk and still- it depends on how drunk actually. I can be pretty drunk and do the show, it’s automatic. You just know the songs.

I suppose the big question on everyone’s lips is when are you coming back to the U.K?

We were just there last September, so we come here every tour, it’s always a major stop for us so I’m sure this year some time. We have a bunch of shows in April then I think we’re gonna start working on getting back to Europe.