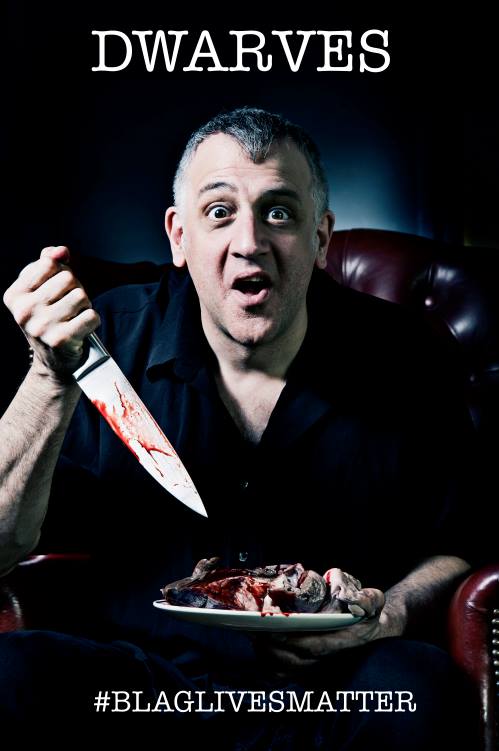 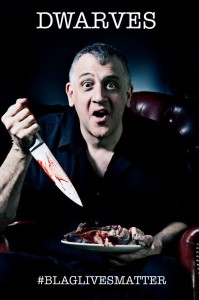 Blag Dahlia (born Paul Cafaro) is best known as the vocalist for punk band Dwarves, in addition he describes himself as a musician; he also released solo material as Blag Dahlia and under the alias, Earl Lee Grace. In 1999, he sang “Doing the Sponge” in the SpongeBob SquarePants episode “The Chaperone”. Two of his compositions were included in the soundtrack to A. W. Feidler’s short film ‘The Jo’b (1997), he also contributed to the ‘Ghost World’ soundtrack, and is credited as the producer for albums by Mondo Generator, Jon Cougar Concentration Camp, and Dwarves. In addition Blag has also authored two novels; Armed to the Teeth With Lipstick (1998) and Nina (2006).

All of this is perhaps surprising when you consider Dwarves became notorious for self-mutilation, on-stage sex, and taking hard drugs, and their live shows would often only last around fifteen minutes, occasionally cut short due to injury caused by spectators! Dwarves album titles include ‘Free Cocaine 86-88’ in 1999, ‘Blood Guts & Pussy’ in 1989. In 1993 the band issued a press release stating their guitarist HeWhoCannotBeNamed had been stabbed to death in Philadelphia. Though this later turned out to be a hoax, the band even went as far as to attach a tribute to the “late” guitarist on their 1993 Sub Pop-released album ‘Sugarfix’ – In 2000, the band offered the track “River City Rapist” to George W. Bush as his presidential campaign song.

In 2015 Dwarves released the album ‘Radio Free Dwarves’ – A 12 song mini-album recorded live in one take for Estonian radio in 2012. In typical Dwarves fashion the album was released in a standard sleeve and as a Deluxe Banned Edition not available in stores, featuring photos by Driven By Boredom and the Malice McMunn. It came in an “under-the-counter” skin-mag style paper bag silk-screened with the Dwarves logo, and is perhaps not best viewed on a public library computer!!

Dwarves have announced the release of ‘How To Win Friends And Influence People’ the re-release of their 2001 album that the band have described as “16 of the most raucous hits from their first decade of unmentionable practices against music, the populace, small animals, teenage girls, law, order, and society in general!”, in addition they have been confirmed to appear at the 2016 Rebellion Festival.

LTW / Rebellion photographer Dod Morrison first interviewed Blag back in 2010, and has recently caught up again with Blag who hinted at what we can expect to witness at Rebellion 2016.

Hi Blag, it’s your favourite Scotsman here, it’s been 4 years since our last interview, and I would like to do a quick follow up; With it being 40 years of punk next year and 20 years of Rebellion Festival, where I can’t wait to see you play..

Dod – So first of all how are you doing?

Blag – Merry Christmas, Dod. I’m feeling barmy, yet chuffed. Not just to be alive, but to be returning to the UK this summer for Rebellion Festival. Best of all HeWhoCanNotBeNamed will be there and we’re going to play a certain classic LP from the last century that involves plasma, innards and felines!

And what did Blag do for Christmas?

Blag – I fucked a lot and I saw a Broadway show. Also, a lot of eating.

What has Dwarves been up to? 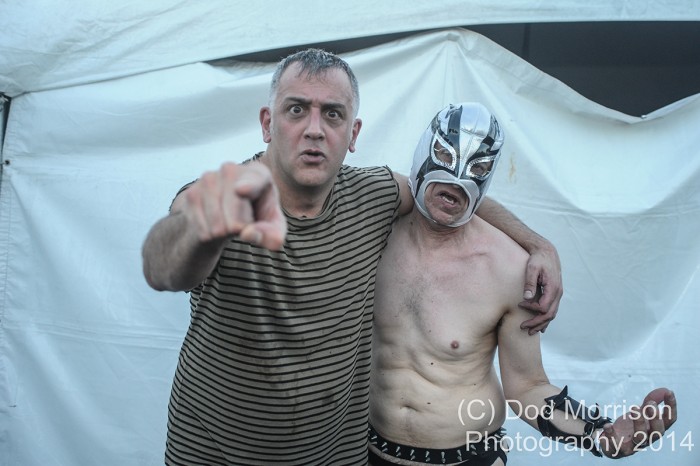 Blag – We did Fun Fun Fun Fest in Austin and Riotfest in Chicago. Now we’re gearing up for New Year’s Eve on the West Coast. We’ve been doing this shite, Doddy!

Did you ever expect to still be playing all these years later?

Blag – Fuck no! I wanted to be retired in Barbados with a troupe of 12 year old girl Scouts. But life is unfair…

Since our last interview I have seen you play Las Vegas and Glasgow, which both shows I thought were quite tame for a Dwarves show are you all mellowing out now?

Blag – I could point out that your sister hasn’t had any complaints about our potency, Dod. Or that in Vegas we’re always on drugs, while in Glasgow we just wish we were on drugs because it kinda sucks there. But that would be rude, so I’ll paraphrase Forrest Gump – A Dwarves show is like a box of chocolates, you never know what you’re gonna get!

Speaking of Vegas and Punk Rock Bowling (2014), it was a great event, did you like playing it and have you done it before?

Are Dwarves doing anything next year to celebrate 40 years of punk?

Blag – I’m going to celebrate 50 years of me! And this band is going to continue ruling rock for the foreseeable future.

What can we expect at rebellion? How about Blood Guts n’ Pussy in its entirety?

Blag – A brilliant idea! Why didn’t we think of that!!! Cheers Dod, see you soon!

With a new album due out in the May, and a tour to follow, I managed to catch up with Dwarves front man Blag Dahlia and put some questions to him about one of music’s controversial bands.

What’s the origin of the bands name?
Since we are all under 5 foot tall, it seemed appropriate.

How long have you all known each other? How did you meet?
We met at a gay teen social in Waukesha, Wisconsin. Everyone else was cranking the new Madonna record, but we favoured Gang of Four.

Who writes your songs?
We write the songs that make the whole world stink!

What originally attracted you to punk?
Girls so dumb and drunk you couldn’t possibly miss.

How much do you think punk has changed in the last 30 years?
I’ve gotten fatter, I know that. Also, no one buys records anymore. Aside from that, it’s perfect!

He who shall not be named only ever wears a wrestling mask and a jock strap or nothing, how did this come about?
If you’ve got it, flaunt it. That includes psoriasis and hepatitis C. 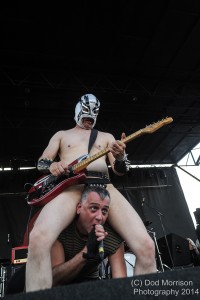 And does it cause many problems with venues?
Not if we do magic tricks and juggling as well.

What’s your favourite band song to perform and why?
I like Happy Birthday. It’s so catchy and everyone relates to it.

What has been your biggest challenge as a band?
Getting paid, doing nothing, and being taken seriously. In that order.

Have you been able to overcome that challenge? If so, how?
No.

Where have you performed? What are your favourite and least favourite venues?
Dwarves have played over a thousand shows since we began in 1986. We’ve toured the world and favour the big cities, LA, SF, NY, London, Hamburg, and Melbourne. Good hotels and easy women in the urban centres.

What’s your coolest band story?
I’m glad you asked. Check out the History section at www.thedwarves.com – it’s full of hilarious stories and lies from the entire sordid history of the Dwarves.

What do you think about downloading music online?
I do it all the time, and so do you.

I saw you at Rebellion Punk festival last year, did you enjoy it?
Always, we love Rebellion! UK crowds rule, although they are a bit pasty and in need of a new haircut. 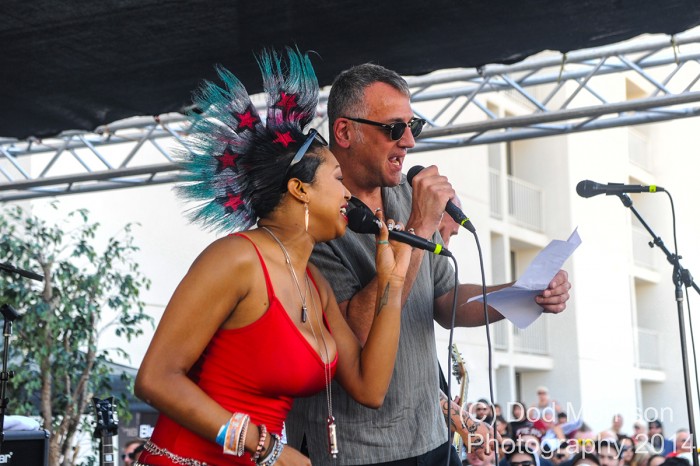 What makes a good crowd?
See above.

Are you still fans and of who?
We live in a time warp. I still shoot up with Kurt Cobain and pop pills with jerry Lee Lewis.

How does music affect you and the world around you?
It feeds me.

You Have a new album out in May, what’s it called and what can we expect?
The Dwarves Are Born Again, is another trip through all hard music genres. This time there is more straight punk rock than the last album, but still lots of wacky surprises. An instant classic.

Is there a U.K tour on the horizon?
Look for us this summer at the usual festivals. And bring hash without tobacco please.

Are you still writing books too?
Yes, NINA and Armed to the Teeth continue to sell. My new one is about conservative commentator Rush Limbaugh. Should be out soon.

Finally after last years Rebellion show, you told us you had the biggest cock in show business is this true?
Well, your Queen Mum seemed to think so!

Louder Than War are Official suppliers of Rebellion Festival Tickets – tickets are in the LTW Shop, and available for immediate posting; we will post to any worldwide location, just ensure you select the correct postage rate if outside the UK.