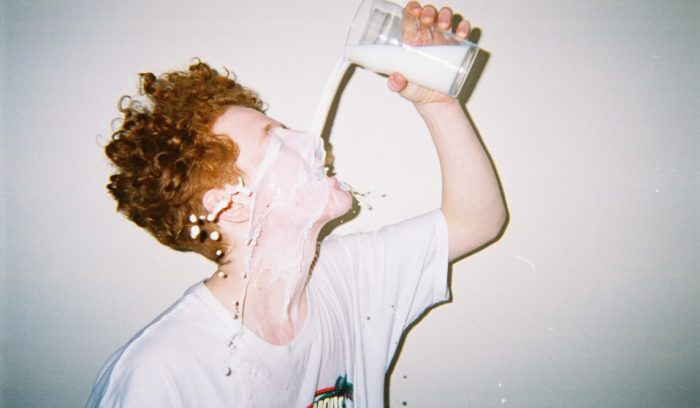 Willie J Healey’s début album, People And Their Dogs, came out in August on National Anthem/Columbia Records. People And Their Dogs is, according to the man himself, “a record for anyone who likes analogue recordings of songs about feeling strongly about everyday things, like being in your bedroom or watching people walk past your window. Feeling like you’re on the outside looking in & being cool with it.”

Often classed as slacker- or self-defined as surf-rock, his is certainly a blend of “rock ‘n’ stroll” that frequently nods to many of his classic musical forebears. Louder Than War spoke to Willie recently. He’d just been to the supermarket to buy some samosas. Himself. Proof enough that this music malarkey hasn’t gone to his head just yet.

You may have caught him supporting Sundara Karma very recently. If so, you’ll be snapping up tickets for his recently-announced headline tour in December.

LTW: Starting with a total language geek’s question – You’re Willie J Healey. Why the middle initial and is it your real middle initial?

WJH: It is. My Middle name is John, which is my Dad’s name. There’s also a bit of a Homer Simpson joke in there. He spends a whole episode trying to work out what the ‘J’ in his name stands for, and it turns out to be ‘Jay.’ ‘Willie Healey,’ as a name on its own, sounded like it needed something going on in the middle there.

It’s got a bit of Screamin’ J Hawkins going on, hasn’t it? Or taking people down the Ben E King route?
I feel like a bit more of a character with the ‘J’.

Are you still a proud dweller of the county of Oxfordshire? Your lifestyle hasn’t taken you to more lofty metropolitan surroundings?

I’m still a proud citizen of the fine rural town of Carterton, which is not exactly a go-to destination for anyone, perhaps even for some of the people who live here. But I’m very proud of where I’m from and my music hasn’t taken me too far yet, certainly not out of Carterton.

And you join a fine legacy of Oxfordshire musical successes.

A lot of bands, rather than solo artists in that list, so maybe solo success could become your Oxfordshire claim to fame.

You’ve mentioned your Dad already. Is he where you get your love of music from?

My Mum and my Dad are big music fans, but I’d say that my Dad was my introduction to 70s rock. I was used to hearing Neil Young and Van Morrison, then when I was thirteen, I decided I’d develop my own music taste. I liked bands like The Kooks – some cool bands, but not quite as credible as artists like Neil Young or the Beatles. Around the age of sixteen, I realised that I was really into 70s rock, so it all came full circle and was definitely started by my Dad.

That’s probably better than reacting against your Dad’s taste in music. Enough people have done that. There must have been some shocking guff when you were growing up which you could have resorted to instead.

I think I got off pretty lightly.

You mentioned Neil Young as an influence. There must be a whole raft of people that critics have cited in comparison, when trying to define what you sound like. I guess that’s just what people do. Have there been any especially terrible or complimentary comparisons that people have made?

I don’t think there have been any terrible ones. Maybe my musical knowledge isn’t good enough to realise when someone is trying to insult me, but I haven’t noticed any really bad ones. There have been a few that have made me think, “Do I really sound like that?”

One I get quite a lot is Mac DeMarco, which I do think is a compliment, because I’m quite a fan of his. Maybe with my really early stuff, you could compare it, but nowadays, I can’t see how it comes under the same umbrella, other than it’s recorded at home. I don’t dislike the comparison, but I just don’t think it’s very accurate.

I went to your gig at SWX in Bristol recently. I enjoyed it immensely, but it also made me feel immensely old. I was looking round the room and everyone apart from the guy who came with me and one other bloke looked over half my age.

I think that other guy was probably my Dad. He comes to as many gigs as he can.

Considering how many mature, broad influences there are in your music, I somehow expected there to be a more diverse age range in the audience. Do you get that elsewhere? Was it just a quirk of that gig?

It’s probably that my music hasn’t got to everyone yet. I feel that there’s something in it for people from fourteen- to seventy-year-olds. I can’t speak for everyone, but maybe the younger kids are looking harder for new music.

I first came across you on 6Music. They’ve really got behind People And Their Dogs and you did your session with Lauren Laverne.

It was amazing for me to do that. It’s the radio station that I’m into; they’re the real deal. To have their support for what I do is a massive compliment. We played the session in quite a small room. I feel they could have crammed us into a bathroom and made us sound good, because they really know what they’re doing. The mixes they do on the fly are amazing. It’s like a really good house party.

They’ve certainly got behind the album. How do you feel like the album’s been received?

It’s certainly not one that’s taken the charts by storm, but I never expected that. What I hope is that people will come across it with time, like a Wilco album. The albums that Wilco released in the 2000s or the 90s are ones I really love, but I’ve just come across them. I’d be happy for the album to have some of those qualities, and for it to take its time. People that have heard it seem to really like it. Some people have been surprised at the variety of styles on the album, which is cool for me, because I don’t want to become predictable. I wouldn’t say it’s out to the masses yet.

What’s your reaction to it, now that it’s out there?

I was done with it a long time ago, because we’d finished it a while back. There’s the record label stuff that takes best part of half a year to get it out on release, so when it came out, it was like I’d just completed the album again. People were congratulating me on finishing the album, but in truth, it had been done for ages and I was already underway with the next one. It’s been good to be able to show it off and not just talk about it. I hope people can enjoy the live sets more once it’s out, maybe sing along with some of the words, as we’ve been playing some of the songs that are on the album in our sets already.

I’m sure you’ll have a host of people singing your words back at you in no time.

It’s very much the unknown at the moment. I feel like we’re at the stage where things are unpredictable, sometimes we turn up and there are a few people and sometimes we turn up and it’s really full. I would much rather play a place that’s smaller and more intimate that’s packed out and has a strong atmosphere. We played a short headline tour not so long ago and the venues were medium-sized and busy. You never know what’s going to happen; you’ve just got to keep swinging.

You do a good line in quirky videos. Are they mostly of your devising?

Yeah. From Best Friend’s Sister until now, those videos have always been my collaborations with a director. The first one was with Sam Hiscox. I came with an idea and he added to it and made it work. The last few I’ve done have had the Alan Partridge-like character of Ray in, directed by Joseph Bird.

To the naked eye, they look like an excuse to be pleasantly daft and to dress up.

That’s precisely what it is! It’s a bit of fun and a chance to do something that keeps people on their toes.

Are those dogs all yours on the video to the track People And Their Dogs? I know the one on the album cover is yours.

The boxer dog is my parents’ dog. The rest were just there for the video. The boxer is called Jeff. I named him after the Wilco front man, Jeff Tweedy, on the premise that I was never going to meet him. But then I did, and I was quite embarrassed. I thought, “What if he ever found out?”

How does Willie J Healey spend the autumn? Hibernating?

Apart from the gigs we do and the occasional cinema trip, I don’t really do much. I’ll probably be doing some recording. I’ve got new ideas, so I’ll be making some demos.

So that first line on the album, “I sleep in, ‘cos I stay up late,” is genuinely you, then?

It definitely was me when I was recording the album. I try not to do that every day.

There’s the headline tour, of course. I’ve got a lot of songs written for the second album too, so I’m going to crack on with that and see how it goes.

Finally – if you could cover any song and get away with it, what would it be?

I would love to cover Whiter Shade Of Pale. I’ve talked about it a bit in the past, but I’ve never plucked up the courage to do it. It’s such a big song. I’ll have to get it ready for you for the next time we’re in Bristol.

You can hear People And Their Dogs here: