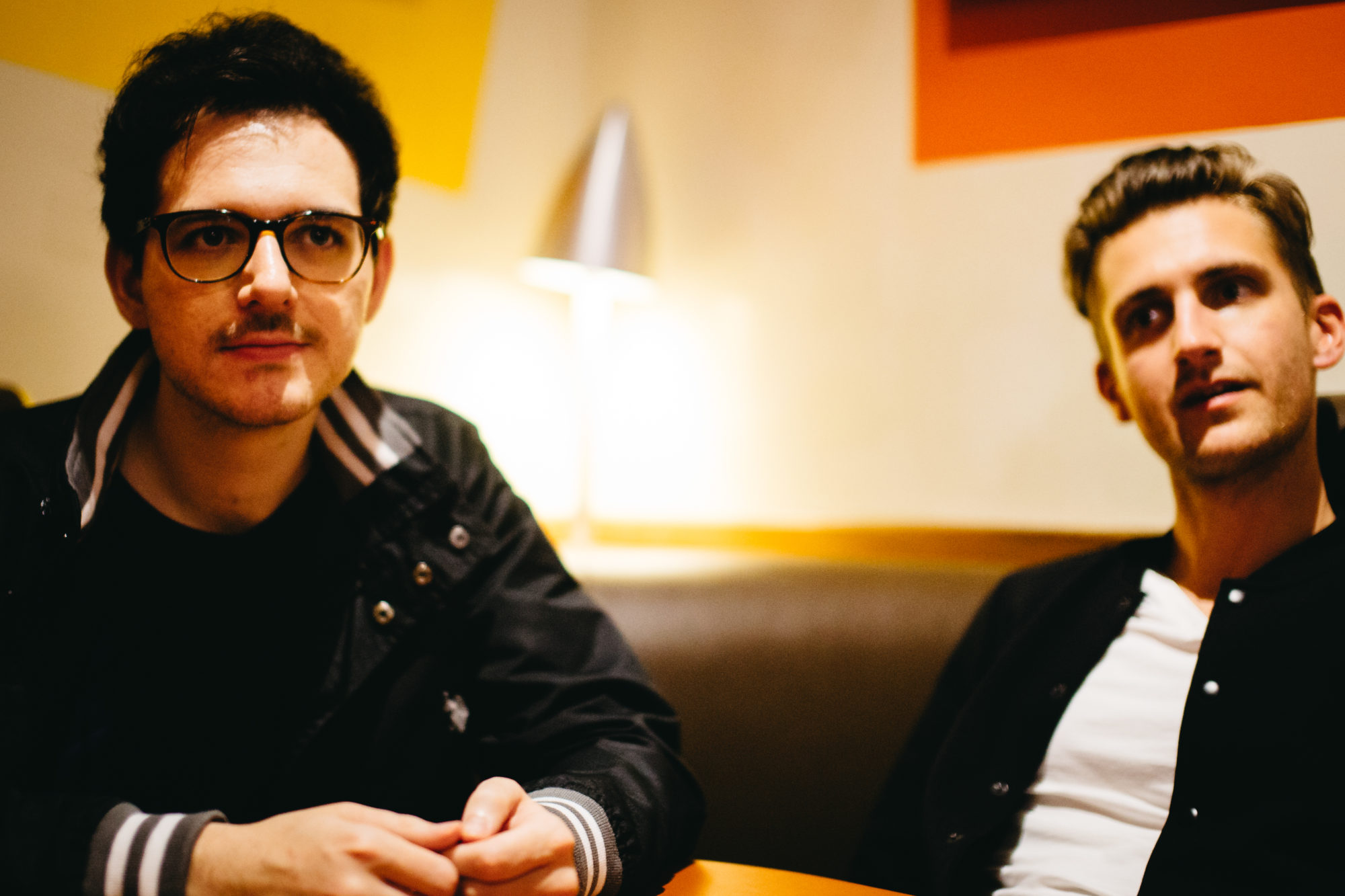 A most unusual duo, We The Dreamers are a tantalizingly sonic duo, who magically entraps the listener into feeling the sensations of dreaming, or even flying through the universe. They consider their genre to be “lush inspirational ambient indie rock” and their music, “A larger than Life, sleepy mix of love inspired, electronic influenced songs to help you feel that sensation of dreaming and/or flying”. 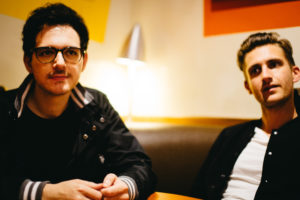 The duo is composed of Chicago born Myke Wilken, singer, writer and producer, and musical child prodigy Ethan Rose, hailing from Albany New York, who is lead guitarist, writer and producer. Wilken is inspired by: “compassion, and motivated by motivators” whilst Rose is inspired by: “reverb, and motivated by his cat Boba”. Together they write and produce the most melodic and enchanting tones and lyrics, all distributed via The Spectra Music Group.

I spoke with Myke and Ethan regarding their music and future intensions, as well as the secret to their sonic wizardry. Both brilliant musical masters of melody, their EP entitled, We All Need Time, an essentially effervescent and sonically spectral purchase…

Louder Than War: How, when, and why were We The Dreamers created?

Myke: We started about last summer. Actually I had one single out, and I was looking at having a band and getting some other songs out. Through a Facebook referral group for musicians, Ethan responded to an ad I had. We met for hot apple cider in Studio City California, and decided to make some music together. Ethan thought of having just a duo, like a writing, performing and producing duo.

Who sings, who write the music?

Ethan: Myke sings, I sing. We both write. Sometimes Myke sings, I’ll start singing along to it and vice-versa. It’s a really collaborative process.

Do you two perform live?

Ethan: We haven’t been playing live lately because we’ve been really focusing on producing and collaborating with other artists, and releasing new material. We want to get some new material every month, every three weeks, to keep the momentum going. We are focusing a lot on producing right now, so that’s where most of our music’s going. 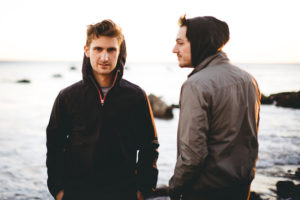 I especially love the song  Wiser. Who wrote that one?

The EP is being released by Spectra Music Group, correct?

Ethan: We signed a distribution deal with Spectra Music Group to release this EP. We actually record all our material ourselves in our own studio. We do everything from all of the tracking of the instruments to the actual production. We did send it out to Outpost recording studio to do some final mixing. We produced it and Spectra Music Group is distributing it.

Myke, when did you decide to get involved in the music industry?

Myke: I first picked up a guitar when I was 11. I started playing other people’s songs. The first song was Hash Pipe by Weezer. It’s most people’s first song because it’s the easiest song in the world. As soon as I started writing music and going to concerts in my early teens I just knew this was what I wanted to do for the rest of my life. It just stuck with me, and it’s the thing I always go back to. It’s the main thing that keeps me driving every day.

Ethan: I discovered music when I was five years old. My parents took me to see  Titanic and when I came back I played the melody to Celine Dion’s My Heart Will Go On, on this little toy keyboard that I had. From there they realized that I could play by ear, and I kind of took lessons for a while. So it’s always been music for me from the start during my  development. Then as a teen I played in a lot of rock bands, and did some light touring, and I guess at that point I realized you could market it and hone your craft and become commercialized. That’s when I became serious about it. I went through college and learned more about the industry, and it came to fruition now.

You’re sound is very different that anyone else’s, why do you think that is?

Ethan: I personally think what makes our band different from other bands is that we are entirely self-sufficient. Everything to conceiving the idea and to physically playing all the instruments that you hear, productions to engineering it, mixing it, making content with the photographer. I studied film and TV. We both know how to do a lot of multimedia stuff. So we both try to do everything that we can, between the two of us to maximize everything regarding our music. Building our website and everything like that. Today you can research everything on your own, YouTube is like free online schooling. Anything we need to do, we can just look it up, troubleshoot and figure it out.

I was referring more to your music.

Myke: We have an interesting way of writing, Ethan has a very cinematic approach to what he writes instrumentally and that mixed with kind of a more pop/rock kind of sound that I like to go for, is really interesting. We add some electronic element.

Ethan: What makes us unique sonically and musically is we try to approach our music with a pop format. We try to make it as accessible to as many people as possible, both in the song structure and the lyrical content and the themes. Musically, I think what makes us unique is that instead of playing parts and using instruments conventionally we try to make them into textures to create more of a mood and an ambience and a feeling rather than just creating a song with parts. We try to simulate sounds, design sounds in different ways. Like Myke mentioned, having a cinematic approach with a pop foundation so that it can be universal and at the same time be authentic and unique. And, one more thing, all of our songs are recorded at different frequencies. Basically all music in our days is recorded at 440 and we record everything in 432. There is a lot of scientific proof that softer frequencies are more pleasing to the ears and hence more pleasing to the energy and vibration of the world.

That is so fascinating because I found some relaxing kind of influence and feeling when I listened to your songs.

Ethan: Wow that’s very nice to hear because what we’re really going for is people connecting with it, not really realizing the details of why they are connecting with it. We try to make our music very feeling based. It’s not necessarily about just hearing the song, it’s more about we want people to feel it. I feel like using 432 hertz as a frequency connects more with people’s subconscious. That’s great, we’ve done our jobs. Whether people know why they are into it or not, we don’t care as long as they like it.

Ethan: We’re going for it.

So you met on Facebook, are you good friends now?

Myke and Ethan:  Yeah, we’re best friends now. I think we’ve been together a year. We met last September.  We spend like 4 days a week together. We try to get together every week night, meet at the studio and produce and write. We had a really great initial chemistry. Myke put out this ad on Facebook and something really drew me to it. I decided to meet up with him and we had hot cider and we just kind of started with a good conversation. We didn’t even jam or show much musically, we just wanted to see if personalities clicked and if our chemistry was there. We both had confidence that we were decent musicians and players.

Do you socialize together also?

Ethan: We never went mini-golfing, but we have plans to go mini-golfing. Myke is great and loves going out, and is very social, and everyone loves him. I hate going out, it just doesn’t work out well. Maybe that’s why our personalities really work. I’m very much an introvert, I’m married and I have a full time job as well. We have our own sort of thing but…we’ve gone out for frozen yogurt…we literally meet every day…

Myke: Basically I take him away from his wife too much of the time.

Anything that you want to say? I feel like you guys are really smart.

Ethan: We’re bad at promoting ourselves because we try to be humble, we really believe in what we do. At the end of the day, not everyone is going to like what we do. Some people might, and if it resonates with the few people then we’ve done our job.

More information about We The Dreamers at: Facebook and Instagram. Listen to them at Spotify and You Tube.