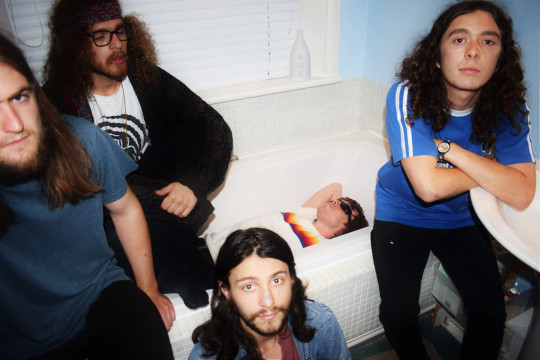 Would you like to introduce yourselves to people who aren’t too familiar with you guys?

And how did you all meet?

Me, Lloyd, Ben and Ryan were in another band, but that came to an end because we were starting to develop The Vryll Society’s sounds, moods and textures. We knew Lewis from gigs and mad parties around town, plus we knew he was really good, we asked him to join and we haven’t looked back. Alan Wills our late manager had us in our practice room hammering us for months after we got together and I guess all that hard work is starting to pay off.

You’ve had quite the busy year, from touring with Blossoms to playing at Glastonbury festival. What’s been your highlight as a band so far? And what’s been your favourite venue to play in?

All those gigs were great, Glastonbury, touring with Blossoms, love all that gear but if I had to pick one gig it would probably be our last show of our tour in Southampton, people were really starting to get it, people going mad, singing the words etc, I think it’s a taste of where things are headed.

How often do people mispronounce the name of your band? Are you sick of the questions about ‘what it means’ yet?

Not really concerned about people not knowing the meaning of the band, if you’re into esoteric gear then good for you, let’s have a chat, but I think people mis-pronouncing the name is pretty funny. As we’re getting more popular it’s getting less frequent anyway.

I’m guessing you always get asked what bands you take influence from, but I’m more interested in the kinds of literature influenced you? How about films?

Good man! Yeah let’s talk about films or music in films. I don’t even listen to bands, just listen to film scores these days, that’s where I’m at! Godard, Tarkovsky and Kubrick are my main amigos when it comes to the big screen, it comes to a point when you watch their films and you’re just in total awe of it all. I was watching The Shining the other day and I just completely forgot about the dialogue. I was just looking at the colours being used for each shot and the symmetry! If this band can be the musical equivalent to Stanley Kubrick I’ll be very happy.

Who would be your dream band to tour with?

We’d love to tour with the French band Air, we met them recently and they were cool dudes, big influence on us, they’d be the one. We saw them at Blue Dot Festival and they sounded really elegant.

Could you tell us about your new single? What was the writing process like for it?

Summer afternoon, acoustic guitar and Jean Luc Godard films. I was trying to write something that could be in one of his films and I think ‘A Perfect Rhythm’ definitely could.

When can we expect an album from you? Have you got the sound or structure for it planned out yet?

You’re going to have to wait a little bit longer for an album. There’s going to be more releases planned first singles/EP’S, lots of new material coming your way first. Yes we do know what the album will sound like.

Have you got any live dates lined up for next year yet? Could we expect to see you at Glastonbury again?

There’s a UK tour planned for February and you can expect us to see us at Glastonbury again but I don’t think it’ll be this year, there’s going to be lots of other festivals this summer thought I might add.

What advice would you give to any new musicians out there?

Get with people who want the same thing you do, your troubles will be small and your joy will be never ending

What are your plans for next year?

You can listen to The Vryll Society’s new single here and they can be found on Facebook and Twitter.