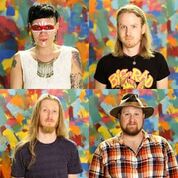 Indiana rock group, Veseria has just released their new album entitled “RLTVTY”, on July 29th. The husband/wife songwriting team of Jen and Patrick Roberts flirt with several different genres including classic rock, folk, punk, and blues. Members Kyle Perkon and Corey Lusk complete the rhythm section, and together they make for a captivating and powerful band.

They have opened for artists such as Lynyrd Skynyrd, Bad Company, Saw Doctors, AWOLnation, Panic! At the Disco, The Skints, 311, and New Politics. They are also about to embark on a UK tour shortly,

Louder Than War traded questions and answers regarding the new release, their future intentions, and their UK tour.

Louder Than War: Congrats on your new release. What does ‘RLTVTY’ stand for?

RLTVTY is simply an abbreviation of “Relativity”; specifically in reference to Einstein’s Theory of Special Relativity which states that the laws of physics are the same for all non-accelerating observers. More on that later.

Tell me about your song writing process, who writes the songs?

We are an orchestrated project. We all write music and when one of us comes to the table with a new song, we bring it as an incomplete skeleton. It is then everyone’s job to tear it apart, reconstruct it and flesh it out into a fully formed piece.

You must be excited about your UK tour. Since this will go into a UK publication, where will you be playing?

The UK tour is definitely exciting! We’ll be in London, Doncaster, Sheffield, Manchester and Liverpool in October and couldn’t be more thrilled.

The songs on this album were curated to share the message that the human experiences of sorrow, hope, fear and overwhelming joy are as universal as our experiences with the natural laws of science. Much like how Einstein’s Theory of Special Relativity teaches us that the laws of physics are inescapable, so are these aspects of the human condition.

It is our belief that an artist’s most solemn mission should always be to bind us together by exploring those common experiences.

What is the band’s favorite thing about performing live?

Oh man. So much. The power of a massive wall of sound. The dips and dives. Sucking a crowd into the show until they are not just observers, but active participants in the performance. The heat of the lights, the sweat pouring from our faces. It’s all just this whole other thing that everyone should try to experience at least once. There’s nothing like it in the world.

What are the band’s musical inspirations?

We come from very different backgrounds stylistically. I was a folk singer before Veseria and love artists like Leonard Cohen, Lyle Lovett and John Prine. Corey comes from the school of Rage Against the Machine and 311. Kyle has backgrounds in hip hop, funk and classic rock standards. Jen really ties us together. She gets into everything from the Doors to MSI to My Brightest Diamond.

We’ve actually been checking these things off over the last year. For me, I wanted to share the stage with my all-time favorite band, Cloud Cult. We got to do that last fall. We got to share a bill with Corey’s favorite band, 311, this past 4th of July. Hoping to check off Jen’s dream of playing the Whiskey A Go Go in 2018. More than anything, as a band we just want to keep creating cool events for people and sharing unique moments with them. Our new motto has been “keep doing rad sh*t”.

If you could say anything to your fans what would it be?

You are as much a part of this band as we are. When you come to our shows, you are signing on to be a member of Veseria for a night. Be a part of what we are creating together.

Where do you see yourselves in 5 years?

After the RLTVTY release tour, we’ll be going back into the studio. We have a fresh batch of songs we’ve been toying with and we’re excited to keep putting out new music. We’re always on tour and always trying to one-up ourselves. In 5 years, I hope we’re spreading out to more countries and new cities in the US.